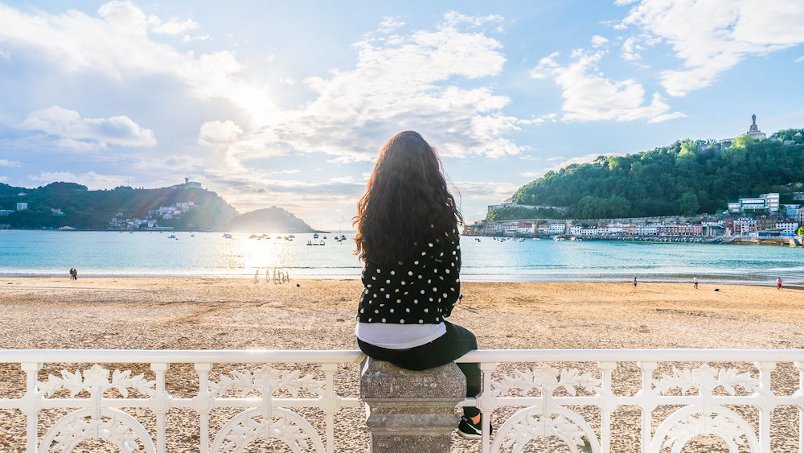 La Concha is the brightest jewel in San Sebastian’s crown and one of the city’s major icons, its incomparable setting. Situated in front of Santa Clara Island, La Concha beach is forever featured in magazines and newspapers and has been named the best beach in Europe and Spain.

Today thousands of people continue to enjoy the view from the famous railings of its seaside promenade, making their way down for a stroll along the beach or to take a dip in its hypnotic waters.

Would you like to know more about La Concha Beach and squeeze even more enjoyment out of your holidays in San Sebastian? You can find all the information you need here:

The queen of beaches

La Concha is a beach packed with history and anecdotes. Isabel II made La Concha beach fashionable in 1845, after her doctors recommended bathing in the sea as a remedy for her skin problems. In her wake, together with the new fashion of going to the beach, came the rest of the court and the high-society aristocrats who gave its origin to the San Sebastian of elegant and distinguished renown. The rest followed suit: the nickname of Pearl of the Cantabrian Sea, the tourists and acknowledgement as one of the world’s most beautiful city beaches. 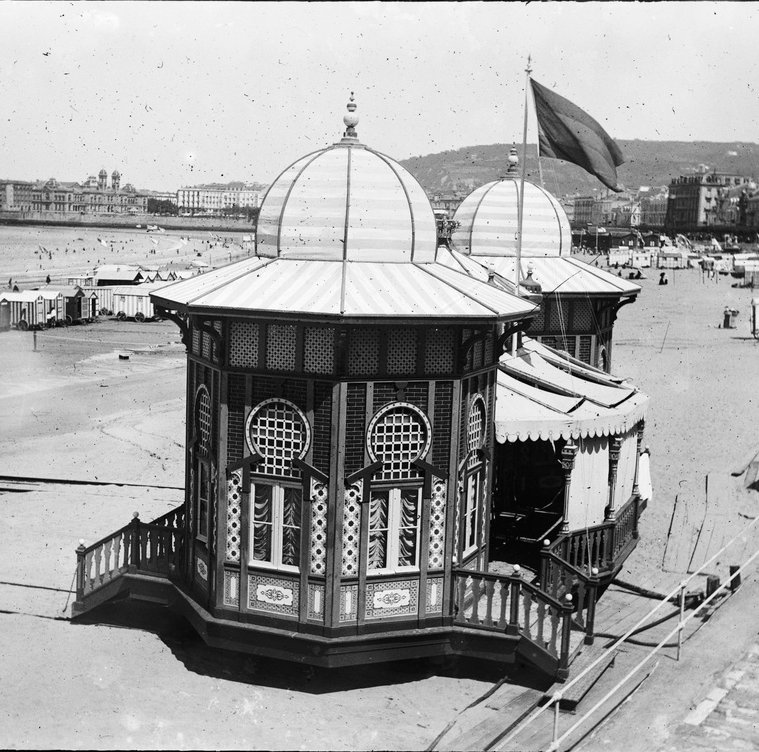 Royal bathhouse on the beach of La Concha.Photo Alday 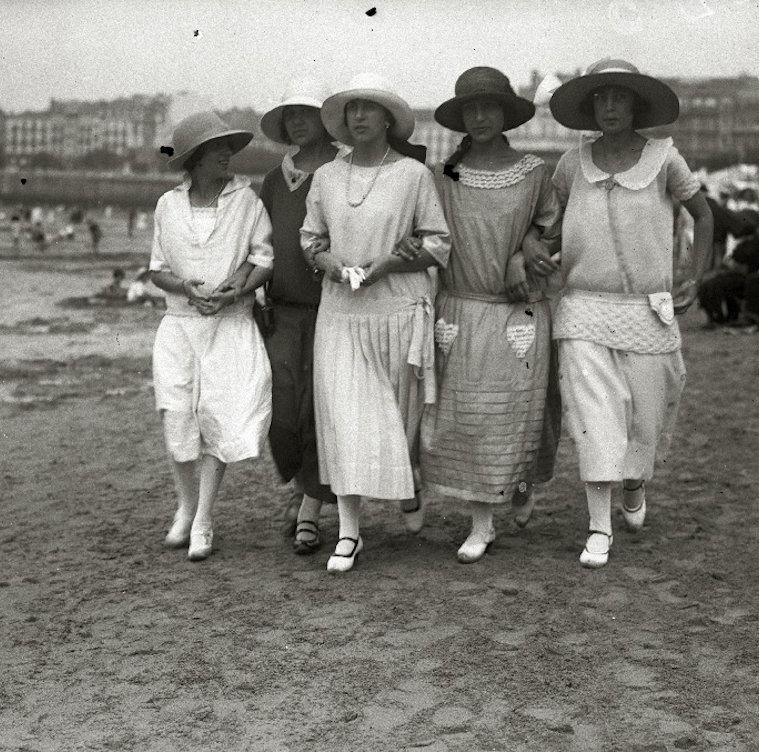 A city beach with heaps of style

La Concha is located in the city centre of San Sebastian and is part of La Concha Bay. Both the beach and the bay owe their name to the similarity of their shape, when seen from a bird’s eye view, with that of a seashell.

The water is never very deep in the bay. Although the tides often limit the available beach space, La Concha always offers spectacular views from inside the water and out. The Big Week, with its fireworks displays, turn the beach into an enormous stage where visitors and locals take delight in the extravaganza over an ice cream. The famous regattas, or rowing boat races, also attract thousands of fans to the beach to follow the competition first-hand.

La Concha is very well equipped and offers all sorts of services: from the classic blue and white sunshades providing protection from the sun and giving the beach its picturesque appearance, to toilets, showers and lockers for the bathers’ comfort. 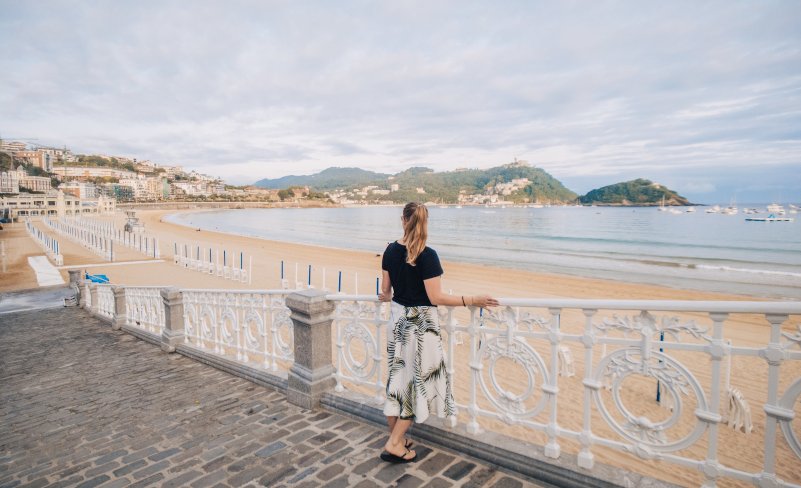 During the summer months, thanks to the calm waters of this beach, a swimming deck is installed in the sea, known as a gabarrón, with slides and diving boards.

A beach where you can take a stroll and do sport

You may wish to

The fine golden sand and its length of more than 1,300 metres make this a perfect beach for enjoying a barefoot walk. Continuing along the sands of La Concha, at low tide you can walk to Ondarreta beach by the path through the rocky area separating the two beaches, known as the Pico del Loro, or parrot’s beak.

Mount Urgull on one side and Mount Igeldo on the other protect the waters of La Concha and make this the perfect spot for rowing a canoe or paddleboard, or, if you prefer, for enjoying a view of the city from the calm and gently moving sea. And if you prefer yachting, diving or long-distance swimming, this is the ideal place for you too. 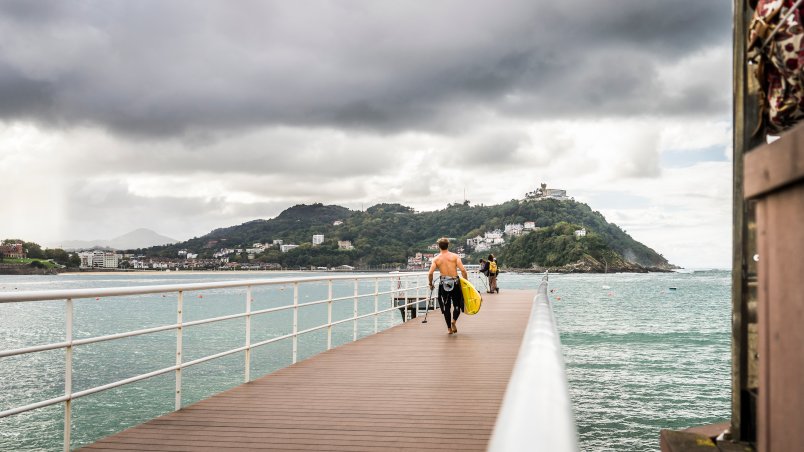 San Sebastian and its close-knit relationship with the sea

You may wish to

Donostia (the Basque name for San Sebastian) was a seafaring town of whalers, explorers and fishermen. Its essence and close-knit relationship with the sea remain visible in the locals’ way of life. If you too take great delight in the sea, San Sebastian offers you the option of enjoying a dip in La Concha bay, short trips and longer outings by boat, full-day fishing excursions, picture-postcard sunsets, and even the alternative of hiring a boat, with or without a skipper, for yourself and those travelling with you.

In summer, a motorboat runs between the port and Santa Clara Island, one of the quietest spots favoured by the people of San Sebastian. The little island, inhabited for years by nobody by the lighthouse keeper, offers a completely different option to the city hustle and bustle: there are no cars, only a tiny beach (the only south-facing beach in the Basque Country and one of the few in the Bay of Biscay), paths, picnic tables, intimate corners and excellent panoramic views of the sea and the Donostia skyline. 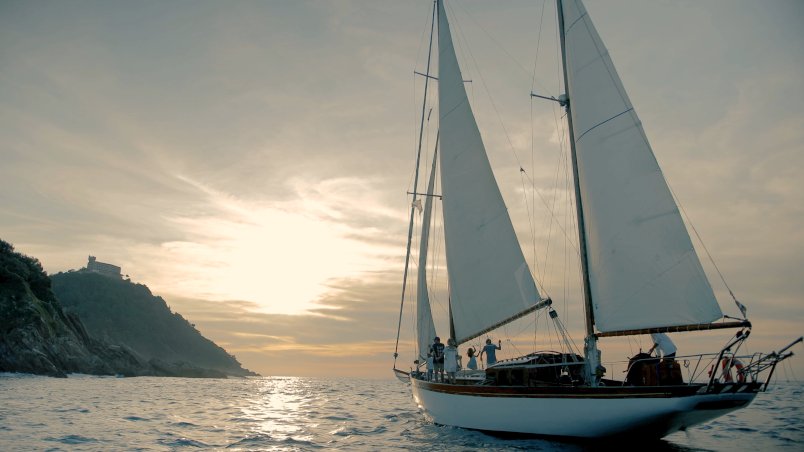 La Concha beach is surrounded by places of enormous interest not to be missed. To the far right, the Nautical Club is one of the city’s most remarkable buildings; considered to be a gem of architectural Rationalism, it even pre-dates Le Corbusier’s villa. Built in 1929 by the architects from Gipuzkoa, José Manuel Aizpurua and Joaquín Labayen, it simulates a boat moored at the wharf. This is the spot to receive the last rays of sunshine every evening. The platform immediately alongside the building and projecting out to sea is one of the locals’ favourite spots for spending a relaxing moment. 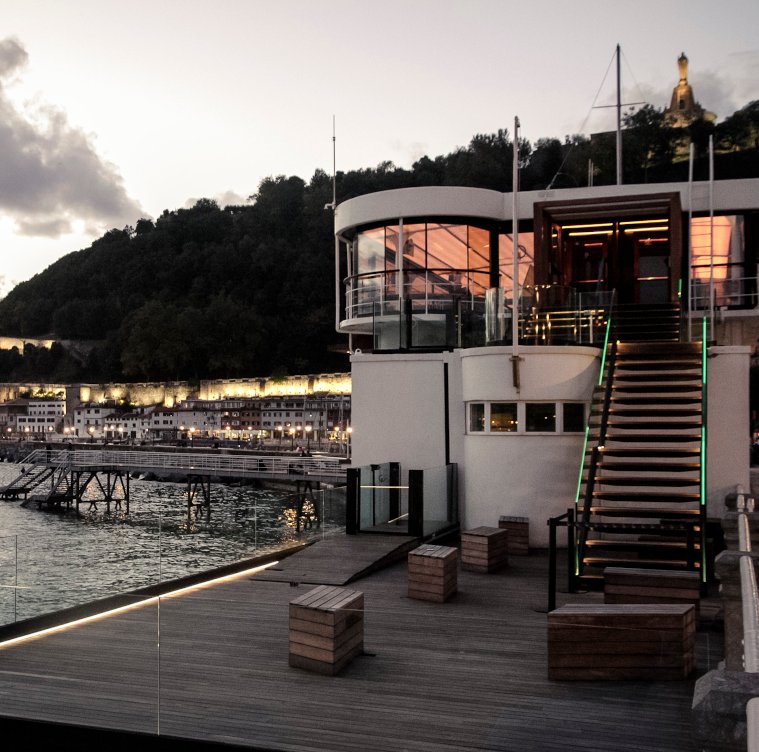 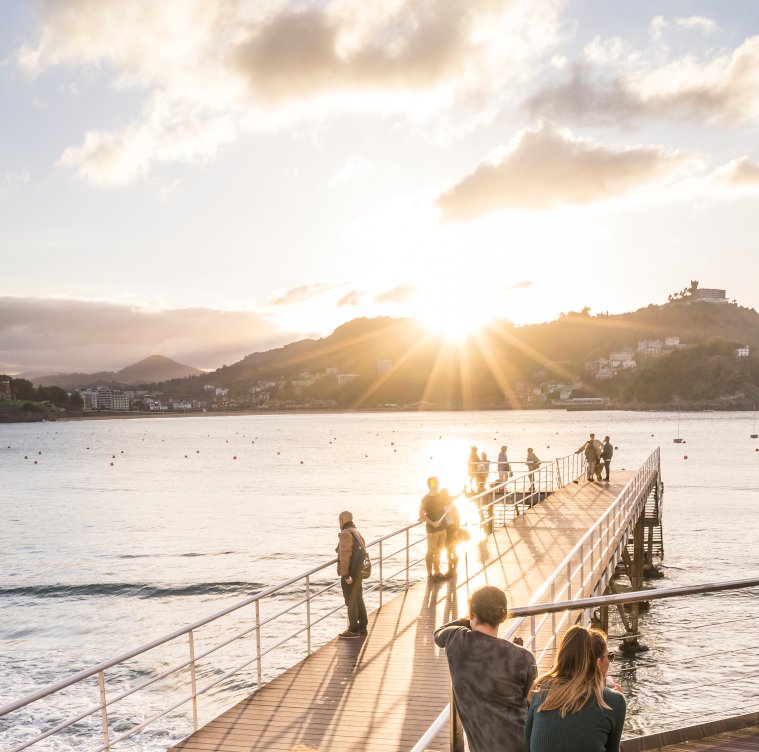 The platform, an ideal place to watch the sunsets

Next to the Nautical Club is the City Hall, previously the town casino, built in 1887 in the style of the gaming houses proliferating on the French Côte d’Azur and the Italian Riviera. In front of the building, the Alderdi Eder Gardens: a green space carefully planned in the late 19th century by the French landscape artist Pierre Ducasse, with a merry-go-round that fascinates children and constant presence of the Tamarisks, an ubiquitous tree in all seaside areas of San Sebastian. 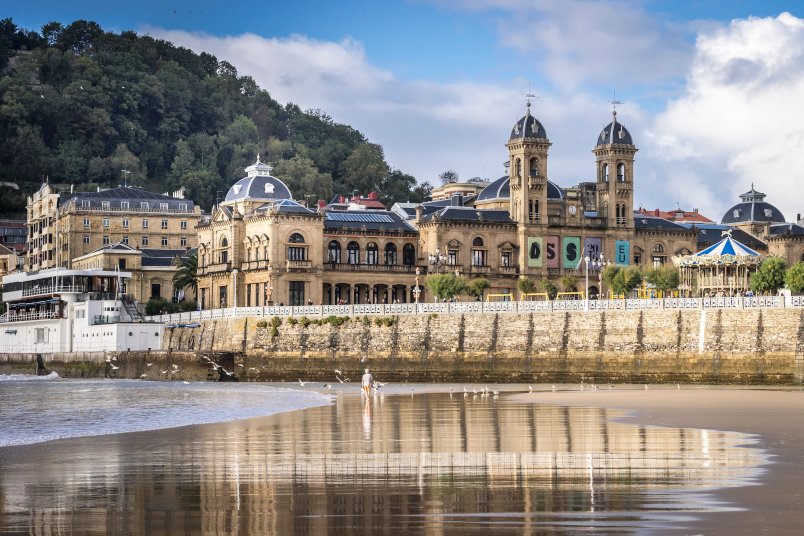 Since 1973, the small bronze figures of Don Quixote and Sancho Panza sit astride their horses in a corner of the Alderdi Eder Gardens, having been conceived several decades previously by the sculptor from Seville, Lorenzo Coullaut-Valera (1976-2932). Although some people believe that the sculpture is simply a small-scale copy of the famous figures made by the same author for the Plaza de España in Madrid, in fact the truth is quite the opposite: Madrid’s Cervantine couple is the copy and the version in San Sebastian, the original. To make the Madrid versions of Don Quixote and Sancho Panza, Coullaut-Valera produced a prototype, a first sculpture, which is the one you can now see beside La Concha.

Following the iconic La Concha railings, designed by the municipal architect of the time, Juan Rafael Alday in 1916, you will come to La Perla Thalassotherapy centre. This spa, with its sea views, was built in 1912 and is considered to be one of the most beautiful of the time. 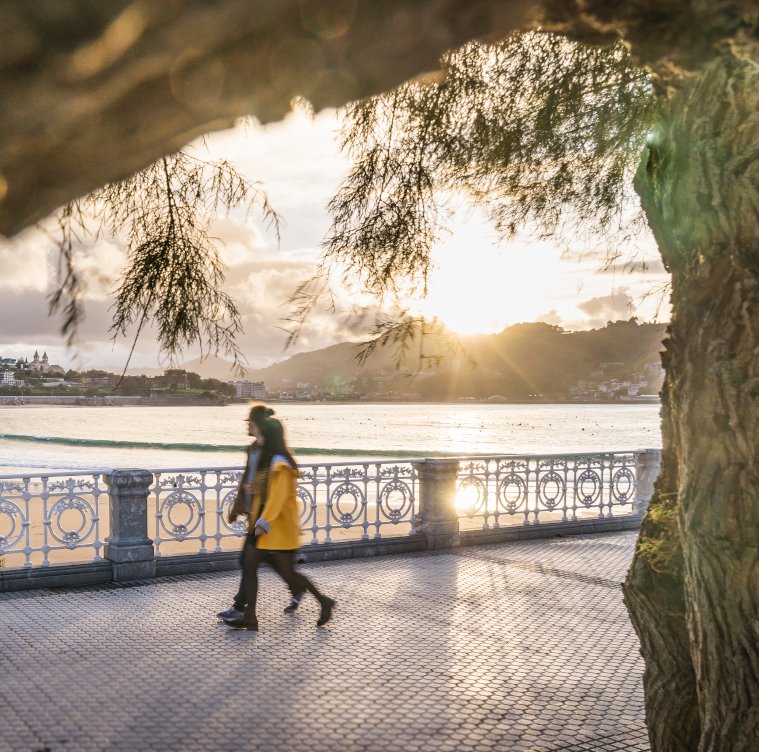 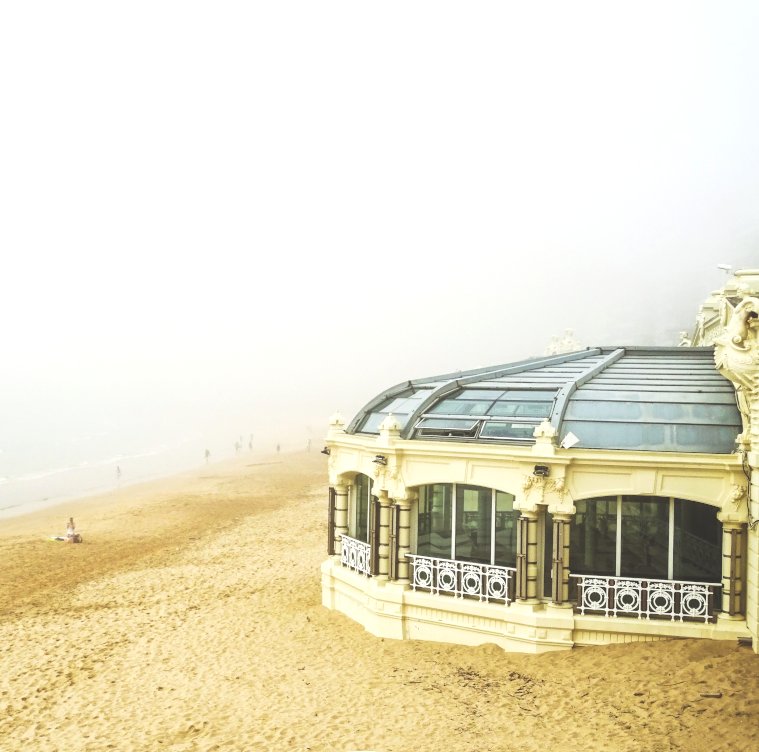 Further along the promenade, and dominating La Concha, you will come to the Homage to Fleming, one of the sculptures dedicated in the decade of the ‘50s by Eduardo Chillida to the great men he admired, such as the French artist Georges Braque, the Italian mathematician Lucca Paccioli and the self same Alexander Fleming, the bacteriologist who discovered penicillin. Chillida made the original of this work in 1955 on commission by the San Sebastian City Council. In 1991, the architect Joaquín Montero, very closely related to Chillida, designed the series of terraces housing the ensemble consisting of the granite sculpture and its pedestal, in the middle of La Concha promenade. 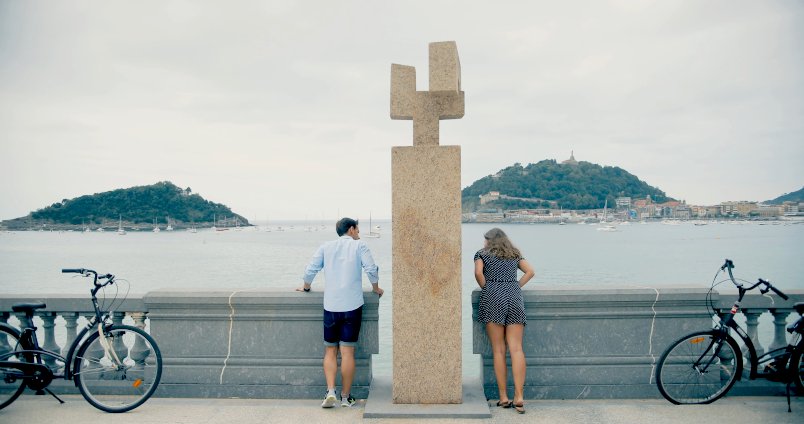 Homage to Fleming by the sculptor Eduardo Chillida

The last stretch of La Concha veers away from the built-up area particularly noteworthy for the stately Miramar Palace. This peculiar late-19th century building is reminiscent of the majestic manor houses of the English countryside and served from 1893 as the summer home of Queen María Cristina, Alfonso XIII and Juan Carlos de Borbón. The best part of the complex is its carefully tended gardens, also designed by Pierre Ducasse, the perfect place to lie down, read or have a chat, with spectacular views of the bay. 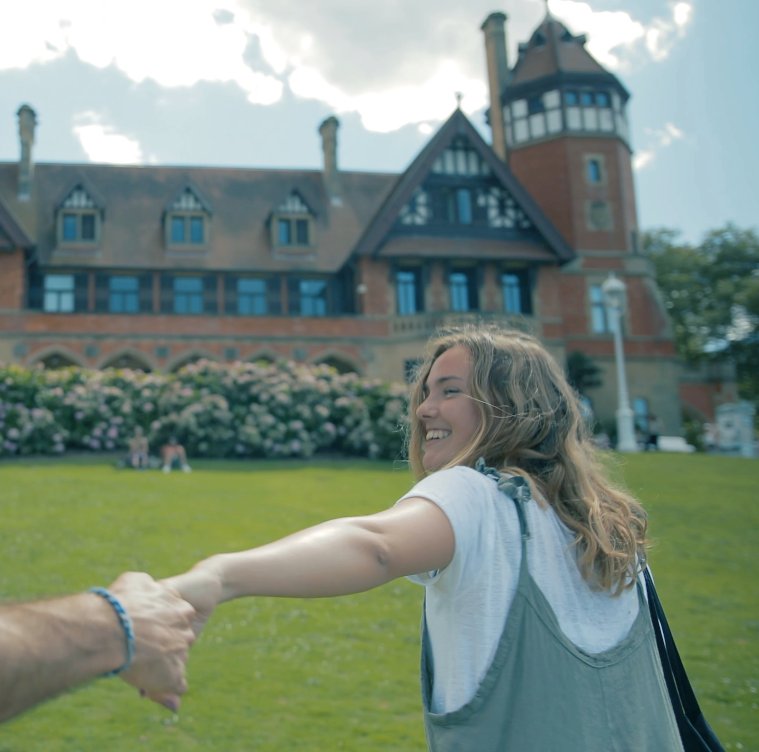 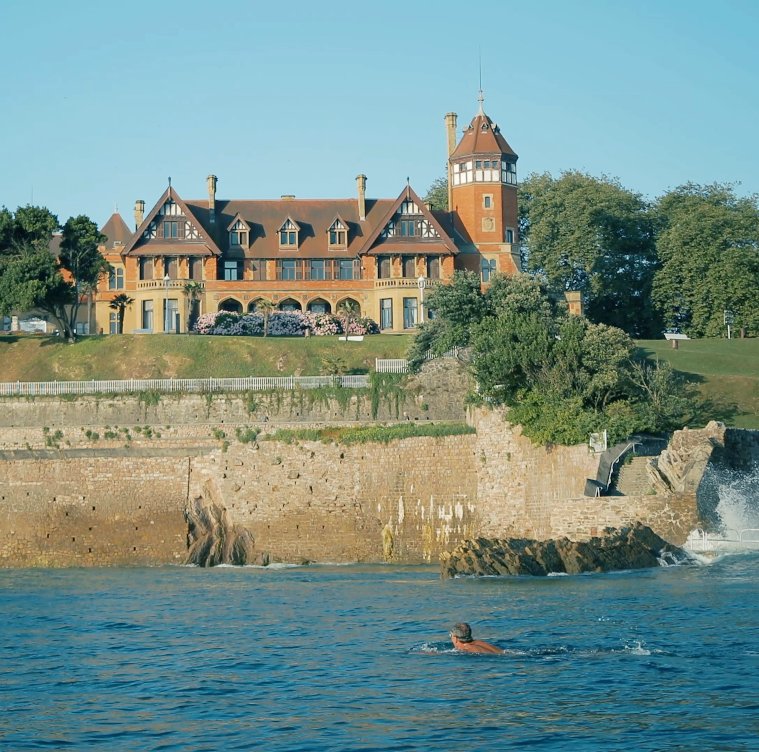 Miramar Palace from the sea