The most youthful surfing neighbourhood in Donostia

At one end is the Kursaal Palace, at the other end is Monte Ulia, and the neighbourhood of Gros spreads out between the two. This neighbourhood meets the Cantabrian Sea at Playa Zurriola, the wildest of the area’s three beaches and one where there are always surfers to be found. 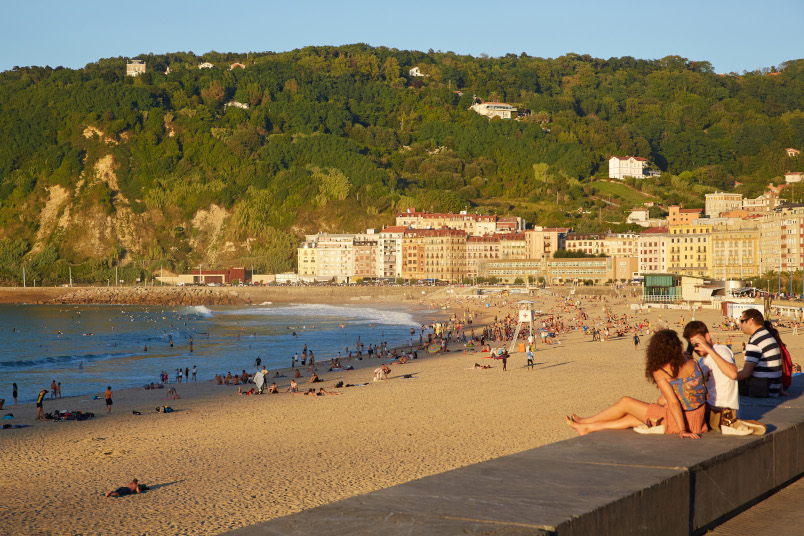 But there is so much more to Gros than just Zurriola Beach. Dynamic, youthful and cosmopolitan, this neighbourhood has become one of the liveliest in the city thanks to its many pintxo bars and terraces and its utterly charming shops.

In this area with something for everyone, it is common to find surfers with boards under their arms, entire families strolling through the streets and squares, and groups of friends chatting amiably on the Sagüés wall. Donostians out pedalling their bicycles, running, playing basketball or skateboarding are also a common sight in this neighbourhood. After all, in Gros sport and the beach go hand in hand.

Map and places of interest 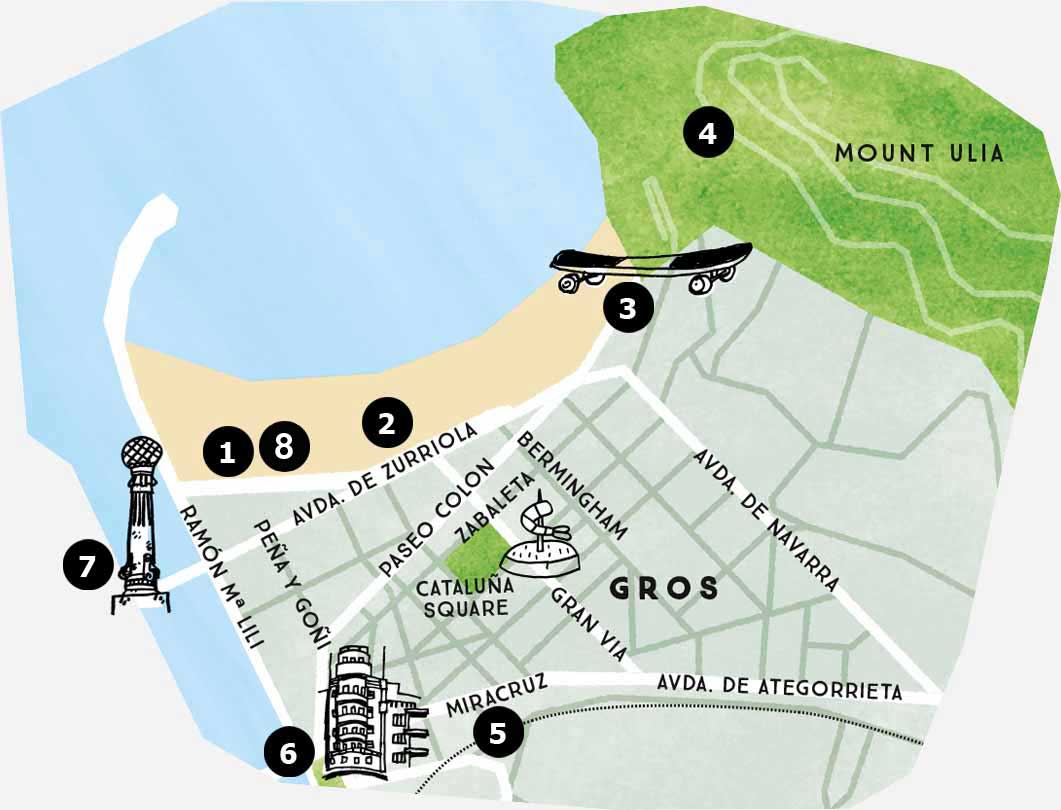 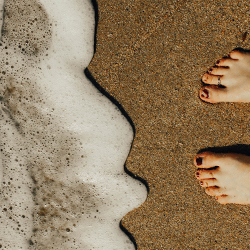 If you're a fan of surfing, Zurriola beach is the perfect location for you. Backed by the Kursaal Palace and Monte Ulia, Zurriola Beach is a continuous festival of waves. Surfers from all around the world come here every day to enjoy the sea and the surrounding environment.

But Zurriola is not only about surfing. The wide beach, which has plenty of room for everyone, the playful sea with its enjoyable waves and the sporting area mean that Zurriola is the location of choice for the young people of Donostia.

And every July, Zurriola Beach takes centre stage in the jazz scene when it is transformed into one of the settings for the Heineken Jazzaldia. 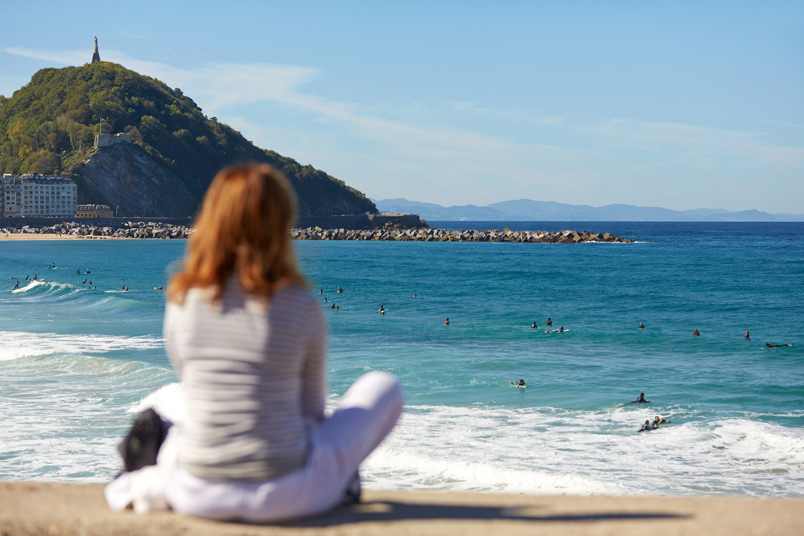 The Kursaal centre: a symbol of the neighbourhood’s transformation

If you are coming from the city centre, the first thing to catch your eye will be the Kursaal Palace. The work of Rafael Moneo, this palace consists of two large buildings that evoke two beached rocks facing the sea. Known as “Moneo’s Cubes”, this is the most important setting for numerous conferences and events throughout the year.

In fact, every September the Kursaal is filled with glamour when it acts as the main setting for Zinemaldia, the San Sebastián International Film Festival. If you want to feel like a you’re a star, go to the back terrace of the Kursaal and take a photo of yourself in the same location where the actors and actresses attending Zinemaldia make their photocalls.

The Kursaal was built in 1999 on the same spot where a casino stood in years gone by. When the Kursaal was officially opened, this kick-started the transformation of the neighbourhood and fuelled the sense of personality that nowadays characterises Gros. 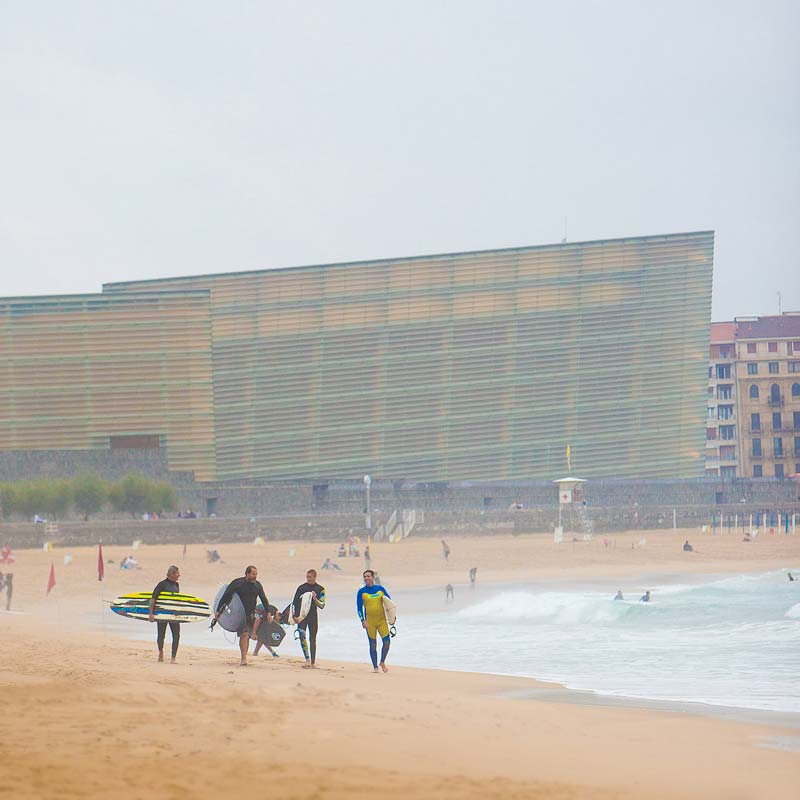 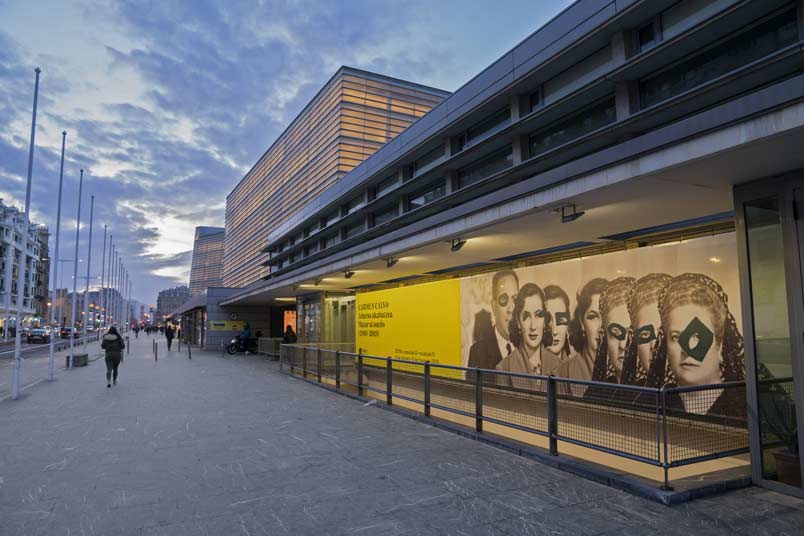 Monte Ulia can be found at the other end of the neighbourhood: this is one of the three main lungs of San Sebastián. Wandering along its paths through the forest and following the edges of the rocky escarpments is an experience that you would not normally expect to encounter in a city. And indeed, the views from the lookout points and the escarpments are truly stunning.

Ulia is a perfect place to visit with children because the ascent is very easy. There is also a children's playground, a dedicated picnic area and a snack bar where you can enjoy a well-deserved pintxo after your walk. There’s no better way of spending the day. 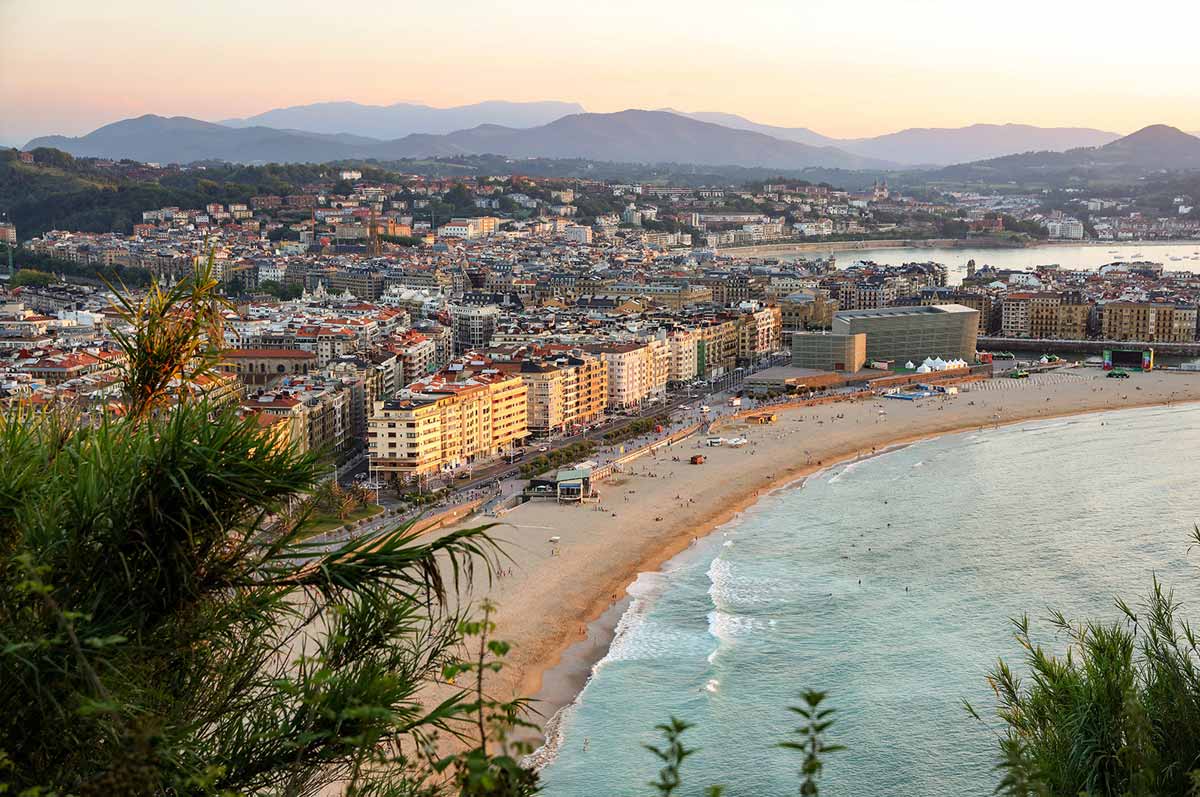 The Sagüés area can be found at the foot of Monte Ulia, at the end of the beach. This is a popular meeting point for both young and old people looking to play sports or simply enjoy a relaxed conversation. Sit yourself down on the wall like a true Donostian and enjoy one of the most spectacular sunsets in San Sebastián.

Sagües also holds one of the most iconic sculptures in the city: The Dove of Peace. Created by the artist Nestor Basterretxea, it symbolises the importance of dialogue and the power of the word to triumph over violence. 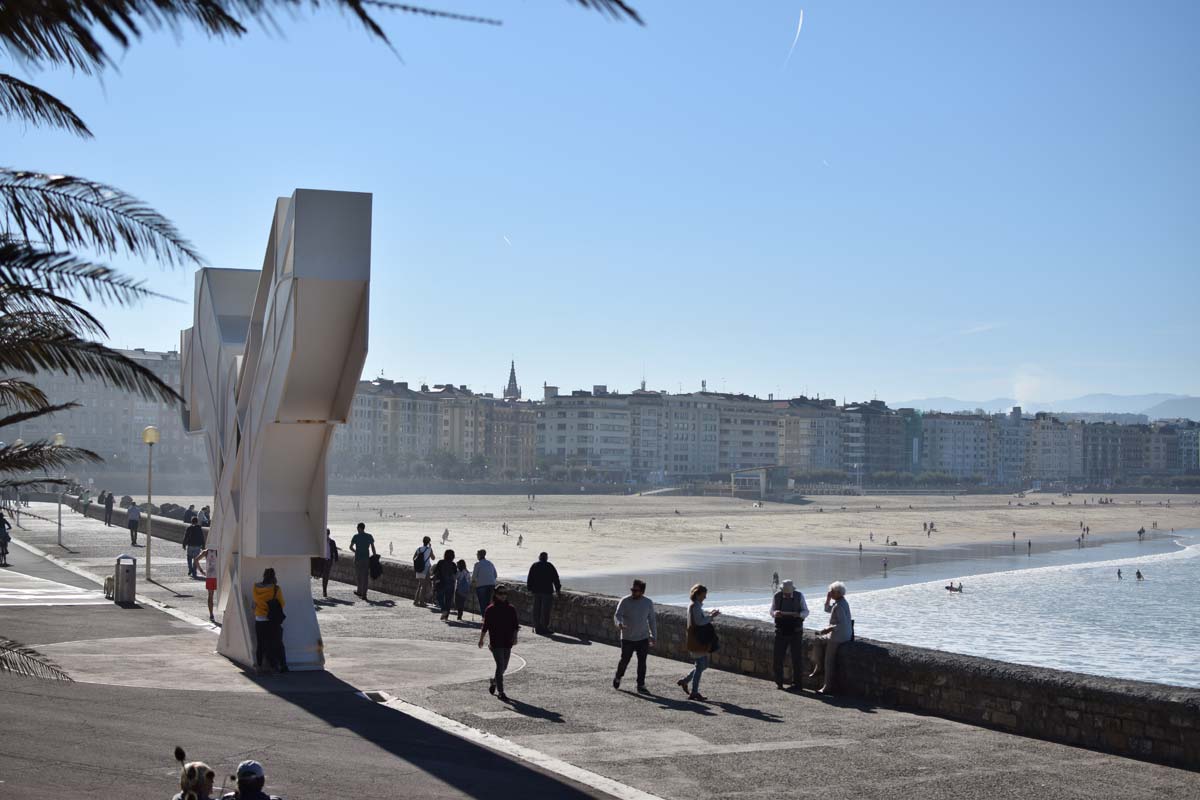 The Dove of Peace is located at one end of Zurriola, in the Sagüés area

After walking through the coastal area, go deeper into the heart of the neighbourhood, because it is here that you will discover the true essence of Gros. Pedestrian streets such as Peña and Goñi or Zabaleta Street are two striking examples of the lively character that is lent to the area by its many pintxo bars and terraces. And who could forget the Plaza Cataluña? With a park for children and boasting as many trees as terraces, this is an entertaining location for both young and old.

It is important to mention that Gros hosts some of the most cutting-edge eating and drinking spots in the city, and for this reason it is one of the areas that is most frequently visited by Donostians themselves. This is especially true on Thursdays: pintxo-pote day. 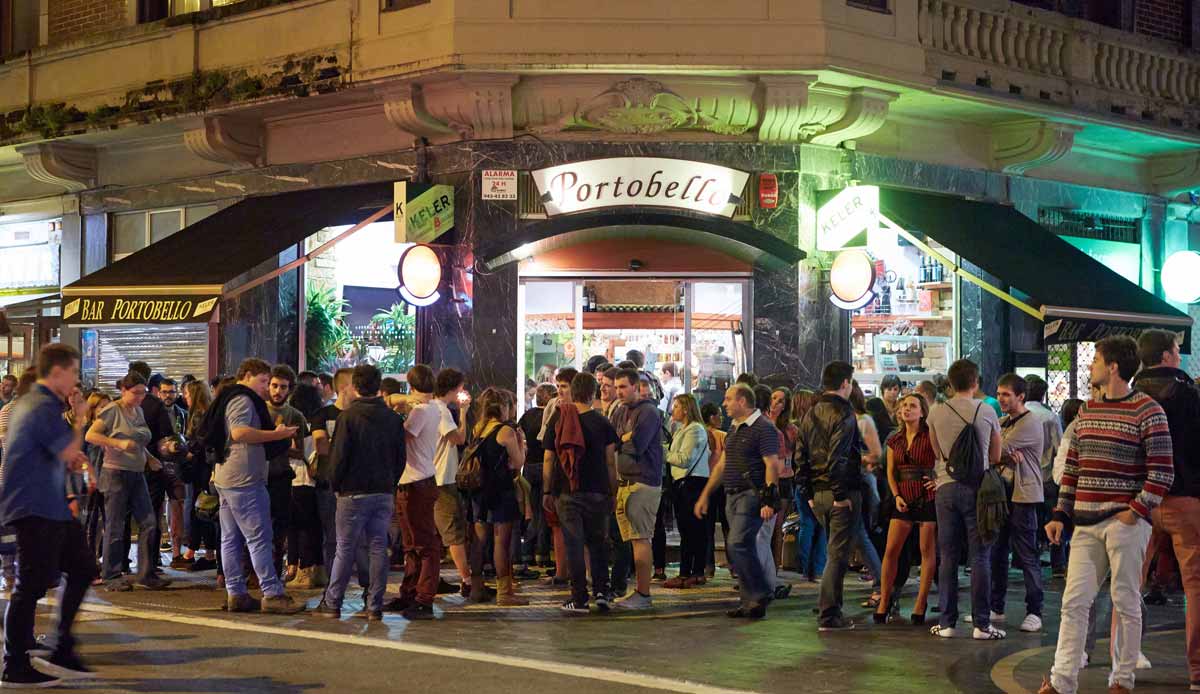 In addition to being an ideal location for eating or going for pintxos, the area is perfect for those who love shopping. The streets of Gros are full of small and enchanting shops with a very personal style which are the work of local designers.

Of course, the area is also perfect for lovers of surf fashion because it is in this neighbourhood that the shops of the most famous brands are found.

As you will now be well aware, the neighbourhood of Gros is strongly linked with surfing and sports, thus attracting many young people. This means that if you would like to stay in Gros you will find a wide range of pensiones, hostales and holiday rental apartments.

If you would rather stay in a charming hotel, you are sure to find what you are looking for in the peaceful neighbourhood of Ategorrieta.

How to get here

You can come by bus, train or car. There are a variety of options to bring you to Gros, but we recommend that you visit on foot or by bicycle. To get here from the city centre, you need only cross the Kursaal Bridge. Once you are in Gros, its pedestrian streets will make walking around the area a dream, and the distances between places of interest are short, which means that you can enjoy pleasant and carefree strolling.

Are you coming by car? In that case, it is best to park in one of the neighbourhood’s car parks, because parking on the street will still cost money. The Txofre, Plaza Cataluña and Kursaal car parks are all good options. You can also leave your car in the Okendo or Boulevard car parks, in which case you need only cross the Kursaal Bridge to arrive in Gros.

No matter how you arrive, the streets and the unique essence of the area will mean that you won't want to leave Gros.

Information on the accessibility of the Maritime Route 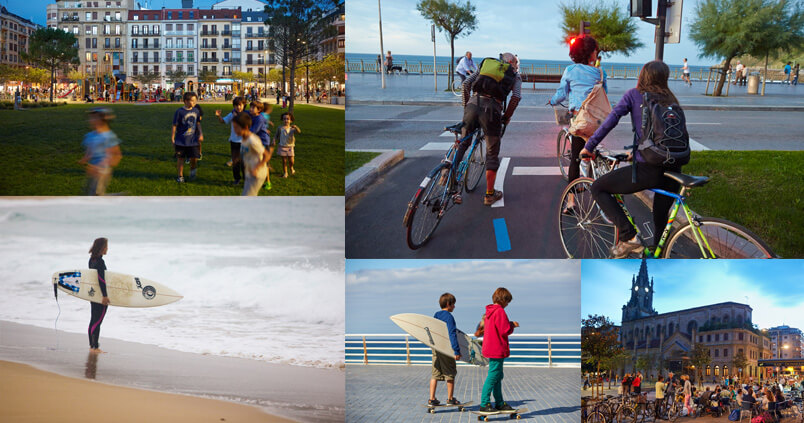