El Peine del Viento (‘The Wind Comb’) is a collection of three steel sculptures each weighing over nine tonnes. These pieces have been positioned in the place where the city ends and the sea begins, where the waves embrace the stark escarpments of Monte Igeldo. Eduardo Chillida anchored the three sculptures to the rocks, so that the incoming wind would be continually ‘combed’ at La Concha Bay.

This is a place where the wind and the sea beat together, whipping the rocks with a sense of abandon. Nature and art blend together and appear as one, and the positioning of the sculpture pieces makes them appear to emerge from the rocks themselves, almost as if they were a part of them. 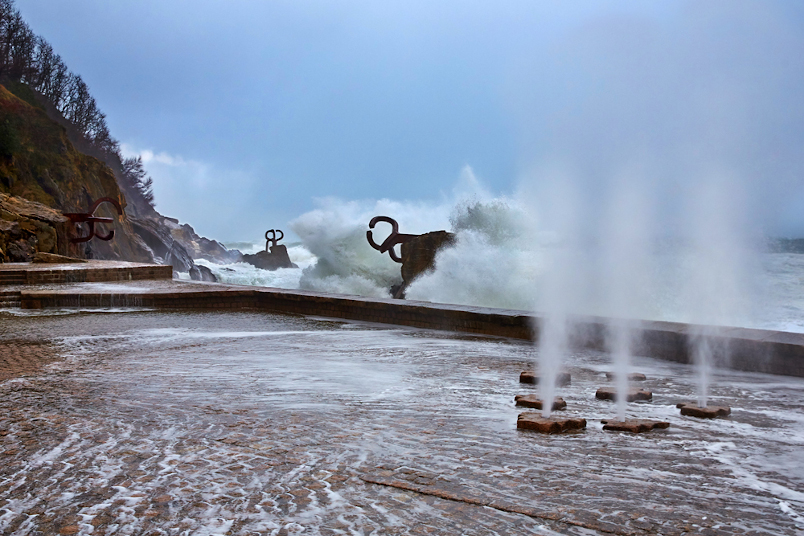 Where the wildest waves play at ‘combing’

When the sea is at its most tempestuous, El Peine del Viento becomes a unique representation with waves dancing between the tines of the sculpture, challenging the power of the steel to the sound of the whistling wind and creating an unparalleled performance. As well as taking pleasure in watching the three sculptures standing up to the continual hammering of the waves, you can play with the wind and the sea, watching the waves rising and falling and then rising again mischievously like a geyser through the holes in the square. But be careful: don't get distracted, or you will end up becoming their target. On the stormiest of days, the police may cordon off the area for safety reasons. Please be mindful of the signs!

If you want to contemplate the strength of the waves from a safer location, we recommend you go up Monte Urgull.

At the end of the 1960s, and mindful of the fact that Eduardo Chillida was already becoming a highly relevant figure, several Donostian people came together to create an homage to the artist. It took 10 years until Donostia/San Sebastián Council decided to honour the work of the artist in a place that was special for him. Indeed, when Chillida was young he used to escape to this place to enjoy the spectacle of the waves and the sea.

The artist began his sculpture series titled ‘El Peine del Viento’ in 1952, but it was not until 1977 that he created his definitive piece and gifted it to the city. Even after this, he continued to work on the design until 1999, creating a total of 23 different pieces. Some of these can be seen in the Reina Sofía Museum in Madrid, in the UNESCO Palace in Paris and in the Chillida Leku Museum in Hernani.

However, there is no doubt that the Donostian ‘El Peine del Viento’ is the most famous of the series. The three parts of the sculpture have been created from Corten steel, with the singular properties of this material presenting an honest display of the passage of time and the transformation of nature.

Although the initial idea was to set up one sculpture on its own, in the end Chillida decided to set up three, striving to create a more balanced and geometric visual ‘whole’. The first two parts, one placed in front of the other, symbolise former unions and the past. The third, furthest, part represents the horizon and the future.

While Eduardo Chillida was placing his sculptures in the rocks, the Basque architect Luis Peña Ganchegui was building the rose granite amphitheatre. The square, which hugs the slope of Monte Igeldo, is of varying heights and from here you can enjoy the performance of the three ‘combs’ defying nature.

And this is how what began as a temporary exhibition became one of the most iconic places in the city.

El Peine del Viento is not the only Eduardo Chillida creation in Donostia/San Sebastián. The city is an expansive open-air museum which contains several sculptures by the renowned Basque artist.

Here, we suggest a short stroll around some of the corners of the city which have been adorned by the works of the sculptor. These sculptures will delight art lovers, but also more curious-minded individuals, with Chillida’s works never failing to make an impact on every visitor.

The route begins at one of the must-see places in the city: La Concha Beach. Here, at one of the lookout points on the Paseo walkway, and just before reaching the Miramart tunnel, you will find one of the gifts that the artist presented to the city. After having been placed in different areas of the Donostia/San Sebastián, the granite ‘Homenaje a Fleming’ (‘Homage to Fleming’) sculpture was positioned here, where it gazes out towards Santa Clara Island and Monte Urgull.

The Chillida stela route continues at Palacio de Miramar. Here, at the small rocky outcrop that separates La Concha Beach from Ondarreta Beach, known locally as ‘El Pico del Loro’, Chillida offers you an 'abrazo’ (‘hug’). And this is the name of the stela which was dedicated to the Donostian painter Rafael Ruiz Balerdi.

As is surely fitting, this route ends at El Peine del Viento. For Eduardo Chillida, this was his place. He understood its spirit and wanted to share it.

“This place is the origin of everything. It is the true author of this work: I myself merely discovered it. The wind, the sea, the rocks: these come together to make a decisive intervention. It is impossible to create a piece like this without taking its environment into consideration. This is a work that I created, yet I did not create”.
- Eduardo Chillida -

No matter how many times you visit here, you will never experience the same settings twice. The waves, the sky and the wind play capriciously with the steel and the rocks, creating a different picture every time.

If you would like to learn more about Chillida's work, Donostia has even more Chillida sculptures. You can also request a guided tour of the Chillida Leku Museum, an old family homestead located a mere several kilometres from San Sebastián which presents a sizeable number of large-scale works in its gardens as well as paintings and smaller sculptures in its interior areas.