The most visited place in San Sebastian is doubtlessly the Old Town. It is the second oldest neighbourhood in the city after Antiguo. It lies at the foot of Mount Urgull, protected by the sea on one side and the River Urumea on the other.

Delving into the Old Town shows you the real social centre of San Sebastián; its streets are crammed full of bars offering the best pintxos in the city and its emblematic buildings such as the Basilica of St Mary of the Chorus and St Vincent's Church are both attractive and interesting. 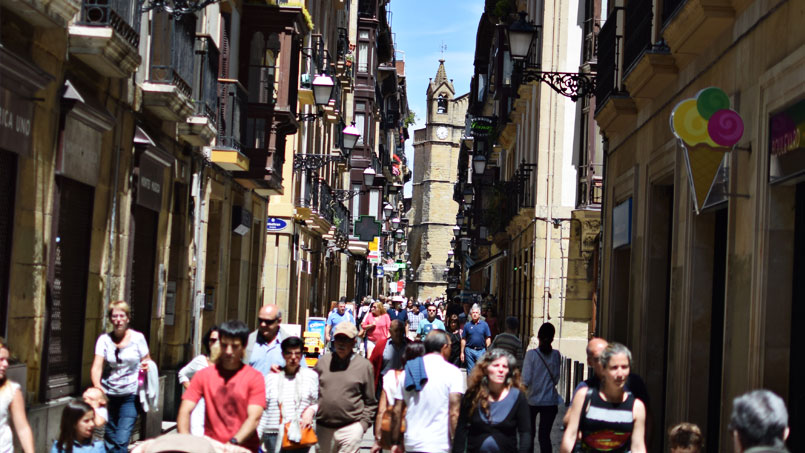 The Plaza de la Constitución, one of the most famous squares in the Gipuzkoa capital, also lies in this part of San Sebastián. It is brimming with life and takes a starring role in the best-known local festivals such as the Tamborrada drumming festival.

A visit to the Old Town is therefore a "must" for tourists in San Sebastián as it gives us the chance to enjoy this area of the city with all our senses. 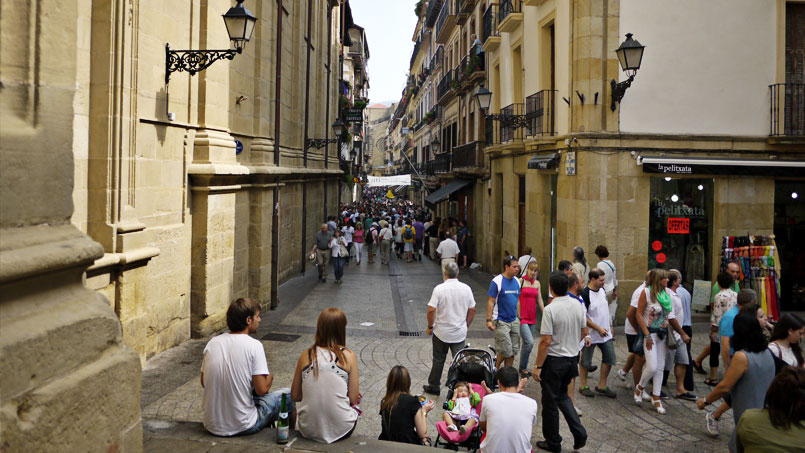 The Old Town, as its name suggests, is the embryo of today’s city. It is bordered by three natural elements: Monte Urgull, the Rio Urumea and the The Concha Bay. It was also surrounded by a city wall until 1863, when it was demolished to make way for the new town. Previously, almost the entire area within the walls had been pillaged and destroyed by Anglo-Portuguese soldiers on 31st August 1813, during the War of Independence against Napoleon’s troops.

The Plaza de la Constitutión lies at the heart of the Old Town. The main building in the square served as San Sebastián’s City Hall until the 40s. The balconies on the colourful buildings that line the square display numbers dating back to the time when it was used as a bullring. Today, however, the Plaza de la Constitución is the scene of busy comings and goings and the setting for major local festivities: January 20th San Sebastián Day, with raising and lowering of the flag at the start and end of the celebrations; 21st December, Saint Thomas’s Day, etc. 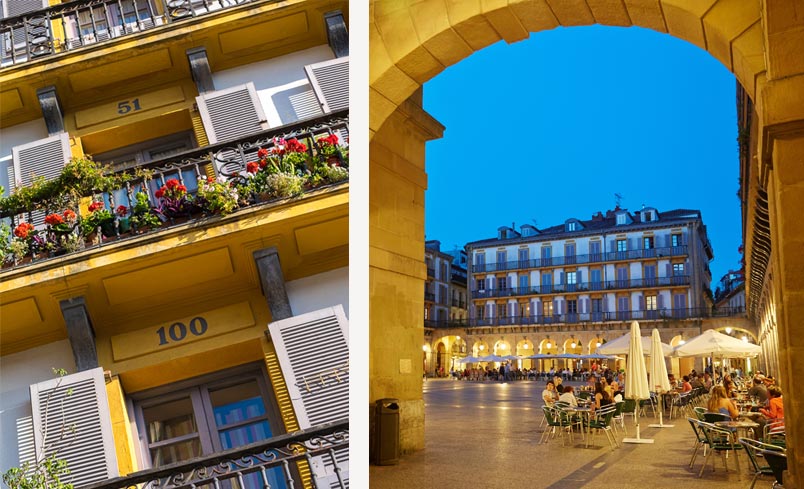 One of the activities enjoyed most by locals and tourists is taking a wander round the Old Town, stopping to get their strength back at one of the numerous bars and restaurants with a txikito, little glass of Txakolí wine and the odd ubiquitous pintxo… the Old Town is a foodie hotspot!

The Old Town is also home to the city’s two oldest churches:

The oldest in the city. Gothic in style and built in the first half of the 16th century, its interior is home to a very fine Romanesque altarpiece, the work of Ambrosio de Bengoechea and Juan de Iriarte. Sharing the limelight is the 1868 French organ by Cavaille-Coll and impressive stained glass windows. On one side of the facade is the sculpture of the “Pietà” by the artist Jorge Oteiza. People christened in San Vicente are known as “koxkeros” for the stones protruding from the church (koxka in Basque). 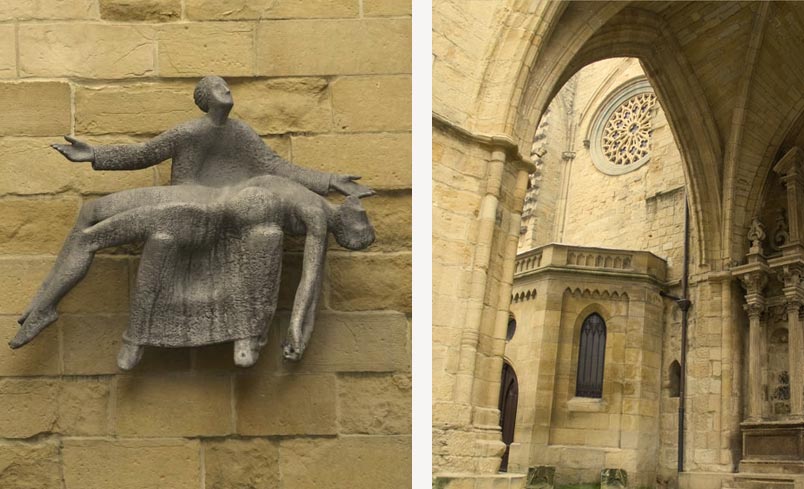 An impressive Baroque work dating from the 18th century in the Old Town’s busy Calle Mayor. This work of art has a particularly interesting Baroque facade of Churrigueresque hues with its large sculpture of Saint Sebastian Martyr, and an altarpiece dedicated to Our Lady of the Choir, the city's patron saint. Alongside the baptismal font is a cross-shaped sculpture by Eduardo Chillida. The Basilica was built between 1743 and 1774, on the foundations of an earlier church that occupied the same space. The main door runs in a straight line to the entrance to the Buen Pastor Cathedral. People christened in Santa María are known as “josemaritarras” (literally: “those belonging to Jesus and Mary”), and are mentioned in the hymn to San Sebastián. 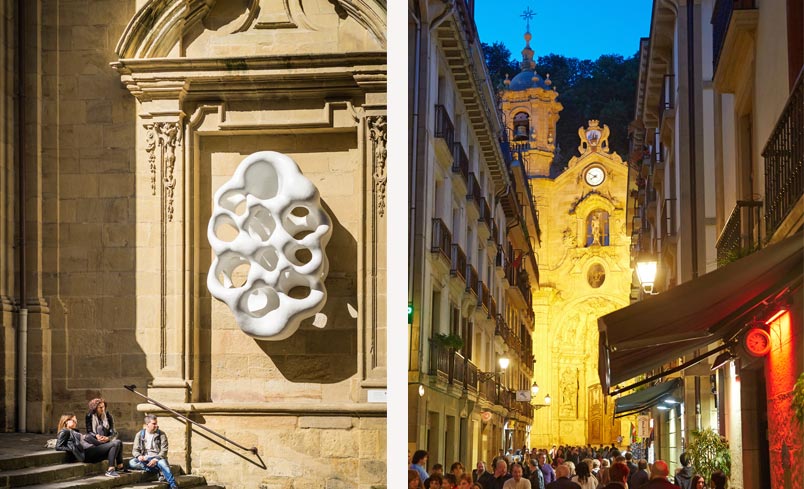 At the opposite end of the Old Town is the Museo San Telmo; an ancient 16th century Dominican convent, once used as military barracks and home today of the new Museum of Basque Society and Citizenship. The building has a cloister and an ancient church well worth the visit. The far eastern side of the Old Town looks on to the harbour, well protected from the Bay of Biscay. A few remains of the ancient walls can still be seen in the underground carpark beneath the Alameda del Boulevard. 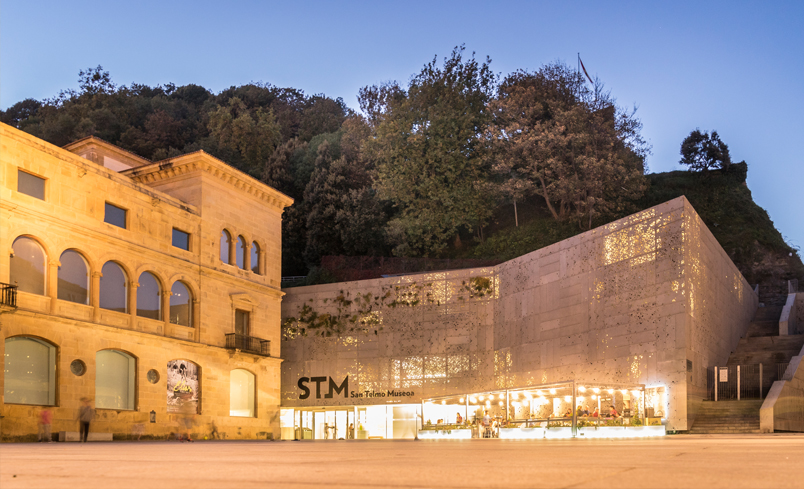