A fairground with incredible views

Monte Igeldo is located at the end of La Concha Bay, marking the limit between the city and the sea. This is a place where the past meets the present, where you can relive your childhood years by visiting a picturesque fairground cfrom yesteryear. Here, you can travel back to the past in a 1912 funicular railway, , while enjoying the most iconic views of the city.

At the summit, you will be able to make out all of the city as well as part of the Gipuzkoan coastline and the immense Cantabrian Sea. Enjoy the tranquil atmosphere of the Bay, as well as the impressive power of the waves breaking against the cliffs. This place guards a special secret: a fairground that captures the essence of the “Belle Epoque".

Let yourself be inspired by the visual landscape and discover the beautiful views that Monte Igeldo has to offer.

The Igeldo funicular is a cog railway with wooden carriages which will take you from the lower slopes of the mountain to the fairground at the summit. This funicular railway retains the spirit f the year of its inauguration - 25 August 1912 - making it the oldest funicular railway in the Basque Country.

Visiting the top of Monte Igeldo is an experience that will transport you back to the past. The journey begins from the station - one of the most beautiful buildings in the city - which is located near to El Peine del Viento. As you make your ascent, with the city below you, you can enjoy taking in the natural surroundings and the spectacular views that this journey presents you with.

You can relive the journey that Donostians made in times gone by, when they would go up to visit the casino and the dance hall located at the mountain’s peak. A picturesque journey with a romantic essence - and this is only a taste of what the destination has in store.

The funicular takes you directly to Monte Igeldo fairground: a funfair from yesteryear. The charmingly old-fashioned attractions, such as the wooden rollercoaster and the trampolines, will delight adults and children alike. 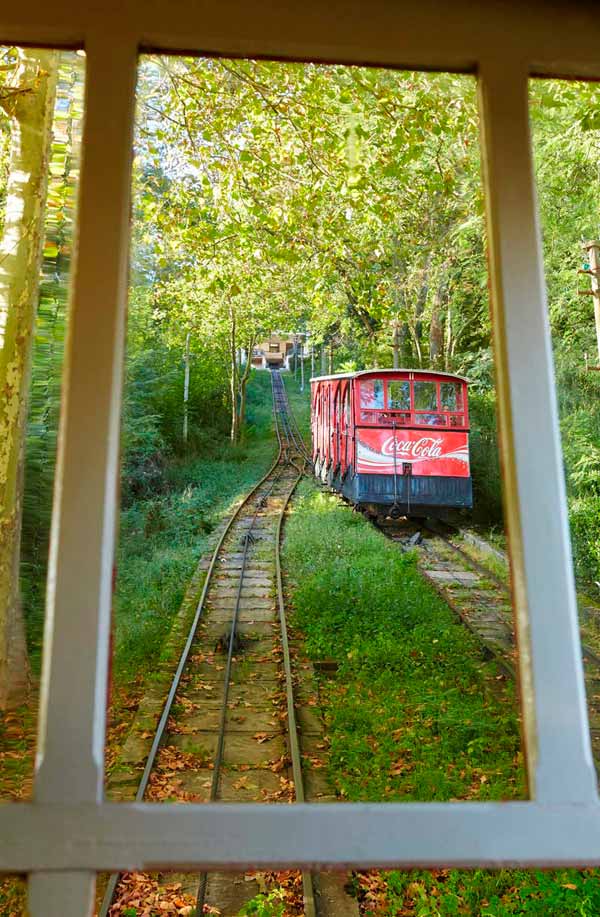 A vintage fairground from times gone by

Arriving at Monte Igeldo means delving into a fantasy world. A fairground steeped in history where visitors will find magic carpets, wooden rollercoasters that dance over the sea, haunted houses, endless mazes and mermaids that you can wave to as you navigate through the mysterious river.

Burn adrenaline on the wooden rollercoaster, augh yourself silly on the “Paseo de la Risa” comic walkway, lose yourself in the Magical Labyrinth r enjoy the game booths: this is only a selection of the attractions that will spirit you back to the past.

Don’t expect spectacular hundred-mile-an-hour attractions: this is a funfair that you can enjoy at your leisure, avouring every moment. Monte Igeldo fairground has 20 vintage attractions from times gone by, which still retain the beauty and the spirit of the fairgrounds of the turn of the 20th century, and which are sure to delight both children and grown-ups.

The imposing Torreón tower rises impassively from the centre of the fairground. Built in the eighteenth century, and lending the location an even more picturesque air, this is a setting worthy of any fantasy film.

You can have a truly magical experience while enjoying the views of La Concha Bay and the entire city of Donostia/San Sebastián from Monte Igeldo.

Among all of these attractions, there is one that really stands out: the lookout point that rises up above the bay of Donostia, from which you can enjoy one of the most iconic panoramic views of the city.

You can star in the typical postcard image df Donostia/San Sebastián that you will no doubt have seen many times on paper, and discover the magical feeling of being up high at the top of the mountain, at the feet of the Torreón tower, next to a picturesque fairground and above La Concha Bay.

Enjoy a dreamy sunset at the restaurant

After enjoying all of the attractions and revisiting your childhood for a few hours, there is a special place at Monte Igeldo where you can sit down and enjoy a lovely aperitif.

With views across the sea and the bay, the restaurant located under the Torreón tower is sure to delight all of your senses.

You can enjoy impressive sunsets from the terrace of the restaurant. Watch the sky take on an orange hue and the sun disappear over the horizon before finally being swallowed up by the sea.

Stay in the hotel and admire the city by night

If the setting is impressive during the day, by night it is truly magical. From the hotel at the top of the mountain, you can take in the view of the city in lights. This is a scene that few have the pleasure of enjoying.

A four-star hotel with a swimming pool and the most contemporary yet luxurious services will that ensure you have a unique experience in the city.

Discover the beauty of the cantabrian coast from the lighthouse

The lighthouse sits on the side of Monte Igeldo that faces out towards the high sea. Surrounded by natural beauty, this is a heavenly landscape with the imposing sea in front. From the terrace of the lighthouse you can make out part of the Gipuzkoan coastline and enjoy cinematic-quality sunsets.

This lighthouse was built in 1855 by civil engineer Manuel Peironcely to prevent boats from shattering against the rocky slopes of the mountain, as the sea waves continue to do. Since that time, the lighthouse has illuminated the horizon every night, warning sailors of the presence of the impassable cliffs of the Donostian coastline.

This lighthouse replaced the tower located at the peak of Monte Igeldo which used a fixed light to warn thousands of sailors of danger since 1748. The Carlist Wars shut that light down permanently, with today’s light then taking over.

The Donostia/San Sebastián lighthouse is the perfect place to enjoy the beauty of the sea and the cliffs of Monte Igeldo. 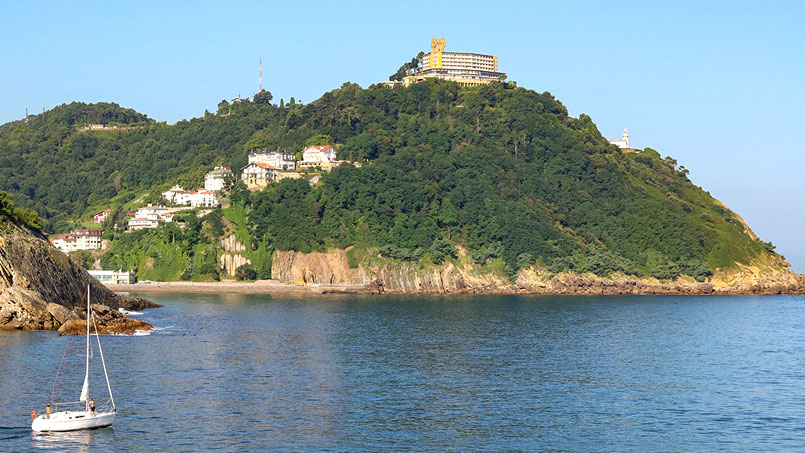 From the peak of Monte Igeldo you can also take in the immense scale of the Cantabrian coast.

A journey through history and culture, surrounded by an iconic landscape

There is a walking route through the city that will take you from the past back to the present, allowing you to discover the history and culture of the city while you pass through the most iconic places of Donostia/San Sebastián.

This walking route begins at a lookout point between La Concha Beach and Ondarreta Beach, where Miramar Palace is located. The architectural structure of this palace is more reminiscent of the English countryside than of the Basque Country, embraced as it is by gardens with Chillida sculptures which gaze out across the bay of Donostia.

Built in the era when Queen María Cristina would spend her summers in the city, circa 1892, Miramar Palace is one of the city's two remaining icons of the Belle Epoque.

After passing Miramar Palace, the route continues along the side of Ondarreta Beach. With every step that you take, La Concha Bay will present you with a different image. At the same time Santa Clara Island will reveal itself to you, imposing, allowing you to take pleasure in the beauty of its many different profiles.

The path that surrounds the bay finishes at a location where the art meets with the sea: El Peine del Viento. The collection of Chillida sculptures here is one of the photo opportunities that cannot be left out of your holiday album.

To complete this walk, there is nothing like travelling back to the past in a funicular railway which was constructed in 1912 and still retains the essence of that era.

This route will take you to a fantasy-filled setting: an old-fashioned fairground rom times gone by. The fairground features iconic attractions such as a maze, a comic walkway with enchanted mirrors and a wooden rollercoaster that will suspend you over the sea.

The view of the city from the balcony of Monte Igeldo eis one of the moments that cannot be missed during your visit to Donostia/San Sebastián.