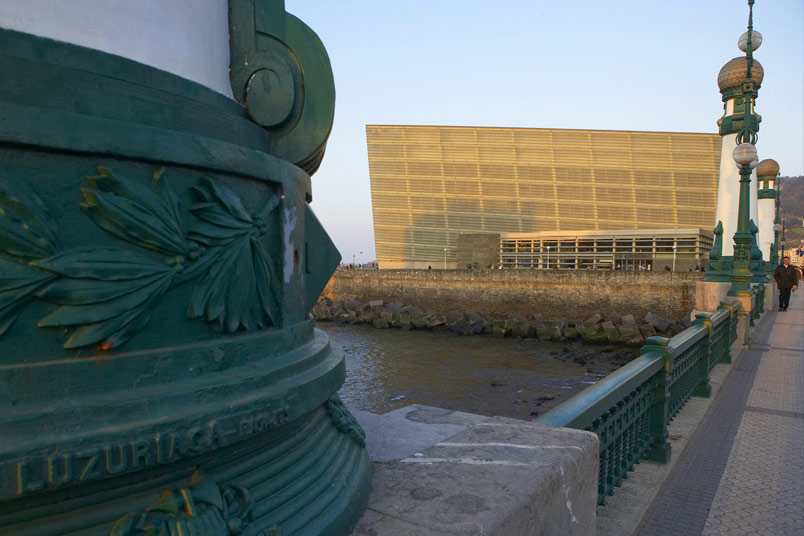 Zurriola bridge with the Kursaal cubes in the background

Is the closest to the mouth of the Urumea River. Built in 1921, it originally stood alongside the Gran Kursaal (demolished in 1972). Today the building has been replaced by the Kursaal Congress Centre (also known as the “Kursaal cubes”). The bridge has fantastic lamp posts designed by Víctor Arana in Art Deco style. 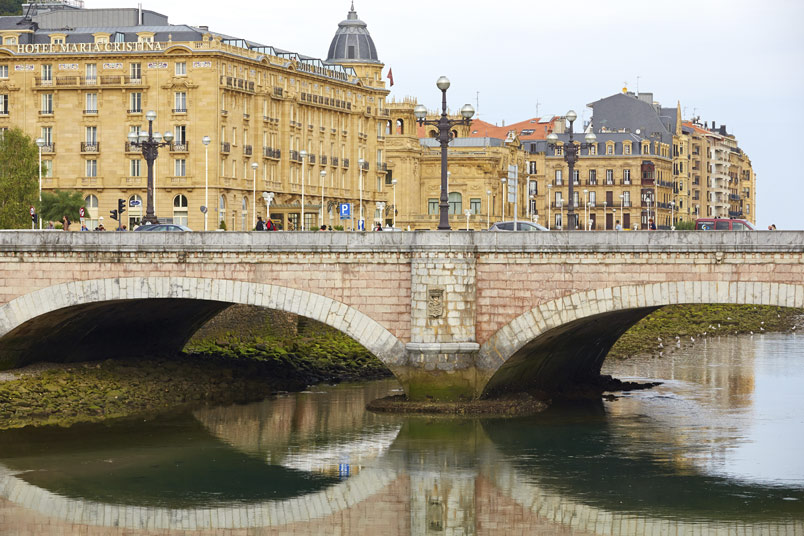 The Santa Catalina Bridge, the first to be built in San Sebastián, was wooden for many years. Its long history and strategic location have seen it destroyed and rebuilt on several occasions. The lamp posts we can see today date from 1926 and were designed by Juan Alday. 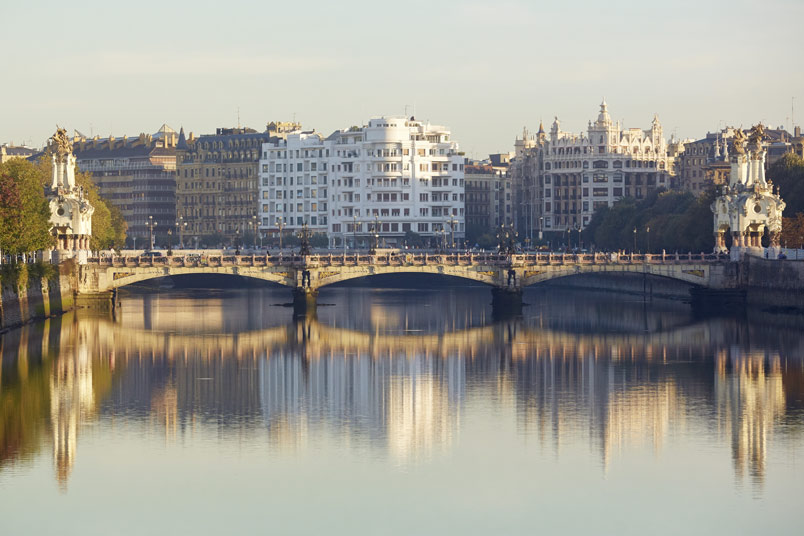 In 1893, a provisional wooden bridge was built to provide direct access from the city centre to the Estación del Norte train station, the bullring and the velodrome. The final bridge was opened on 20th January 1905 for San Sebastián Day. The bridge is known for its four impressive obelisks, one in either corner, measuring 18 metres in height and crowned by groups of sculptures. 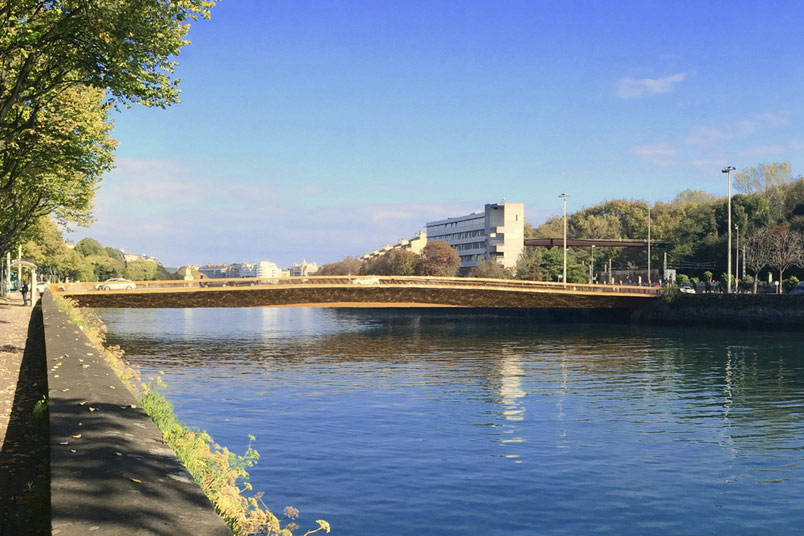 Opened in 1999, this was the first bridge in San Sebastián to span the Urumea without river supports. The bridge was built to coincide with re-urbanisation of the Paseo Federico García Lorca, on land that had until then belonged to the national railway company, RENFE. 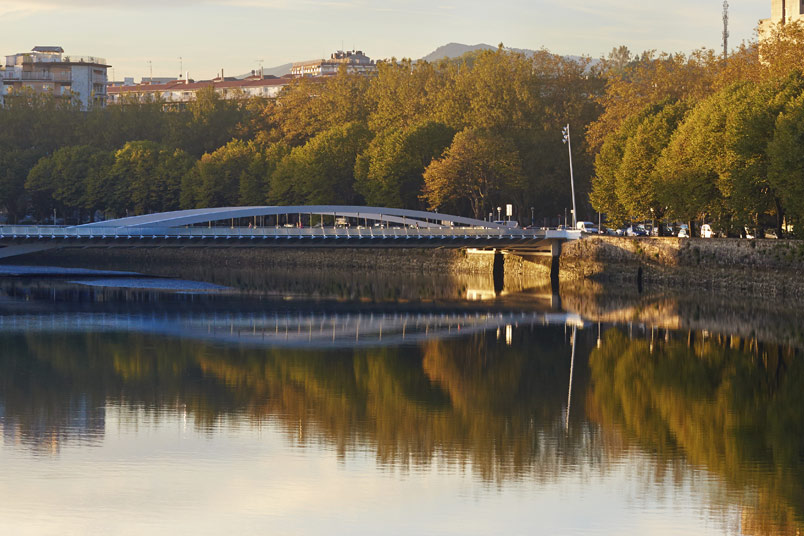 Next to the Hotel Amara Plaza, perpendicular to the river and in line with the Hotel itself, you will come to the Lehendakari Aguirre Bridge. Opened in 2010, this is yet another bridge with no river bed supports, meaning that the structure rests on the banks of the Urumea. This permitted its highly innovative design.

Twin arches emerge from the right bank, rise above the floor of the bridge, and come back down to rest on the promenade running along the opposite bank. The pavement consists of 45,000 slabs in 8 colours, hexagonal in shape and 10 centimetres in size, all laid out according to the design of artist Manu Muniategiandikoetxea. In the remainder wood has been laid, similar to the structure of the platform alongside the Club Náutico. 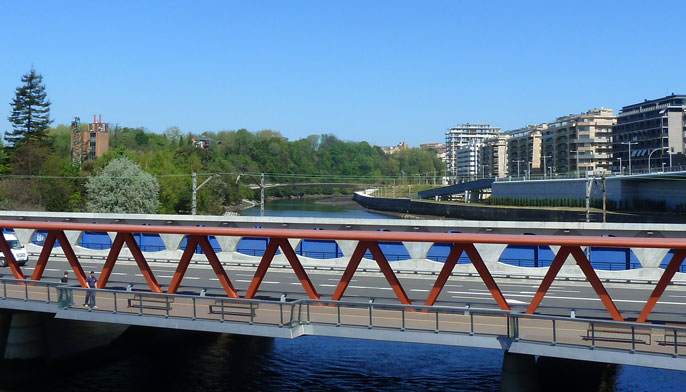 On coming into San Sebastián from the south, trains had to cross the Urumea to reach the Estación del Norte. The so-called Iron Bridge was therefore built for the purpose. In 2008 the old Iron Bridge was dismantled and part of its elements used to create a bridge to the new Riberas de Loiola district.

The Iron Bridge was replaced by the Real Sociedad Bridge, much wider than the original and opened in 2010. 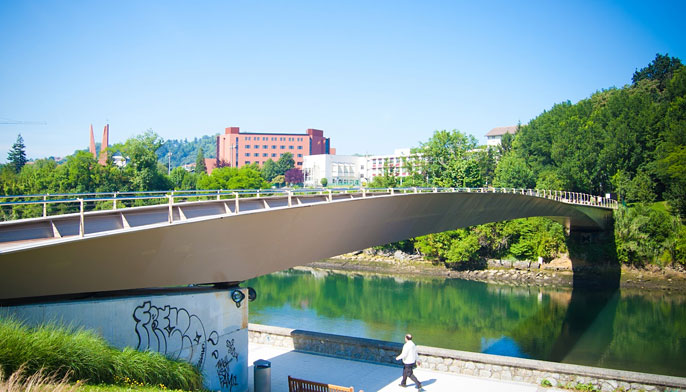