A cinematic location between two beaches

Miramar Palace was built in 1893 on the order of Queen María Cristina of Austria, who used to spend her summers in Donostia/San Sebastián. After considering other places such as Monte Urgull and Aiete, the queen settled on this location, where there had previously been a hermitage which had to be moved to another spot. Nowadays, if you visit the Antiguo neighbourhood you will find the palace among its streets.

n first impressions, the palace is reminiscent of English noble country houses. Designed by the English architect Selden Womun and built by the master craftsman José Goikoa, for years it remained in the hands of the Spanish Royal Family, serving as their summer residence and as the college of Juan Carlos de Borbón. 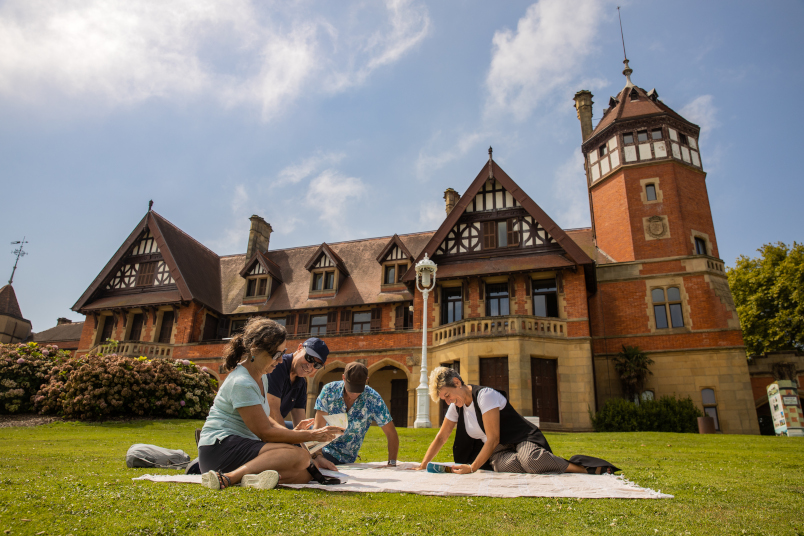 No matter where you stand on La Concha Bay, if you lift your gaze towards the city your eyes will immediately be drawn to Miramar Palace. Its history, architecture and, above all, the views from its garden and natural lookout point mean that Miramar Palace is a location that cannot be left out of your itinerary around the city.

n 1973 the Local Council acquired Miramar Palace and since then it has served as the base for summer university courses by the University of the Basque Country, it has been the setting for the Quincena Musical, concerts and it has been used a location for the celebration of many different public and private events.

Stroll through the palace gardens and feel like a real donostian

Opposite Miramar Palace there is an extensive array of lush green gardens which are decorated with floral centrepieces and ornamental trees. These gardens have a dream backdrop: the impressive La Concha Bay.

And in the gardens there is a simple tradition that you can adopt to experience the city like a true Donostian: this is lying down on the grass and enjoying a pleasant conversation or a comfortable silence while gazing out across the intense blue of the sea.

If you prefer to go for a stroll, there is a pathway which winds around the gardens and the palace. This walkway has benches where you can sit and enjoy one of the best views of the city, or read peacefully.

As with the other iconic locations within the city, Eduardo Chillida also left his signature here. The artist wanted to express his desire to embrace the city from this lookout point over La Concha Bay.

And that is how the sculpture at this location received its name. “El Abrazo” or “The Embrace” is a metre-high stele which Chillida dedicated to the Donostian painter Rafael Ruiz Balerdi. The artist presented this piece to Donostia/San Sebastián following a retrospective exhibition of the painter’s work that was held in Miramar Palace. 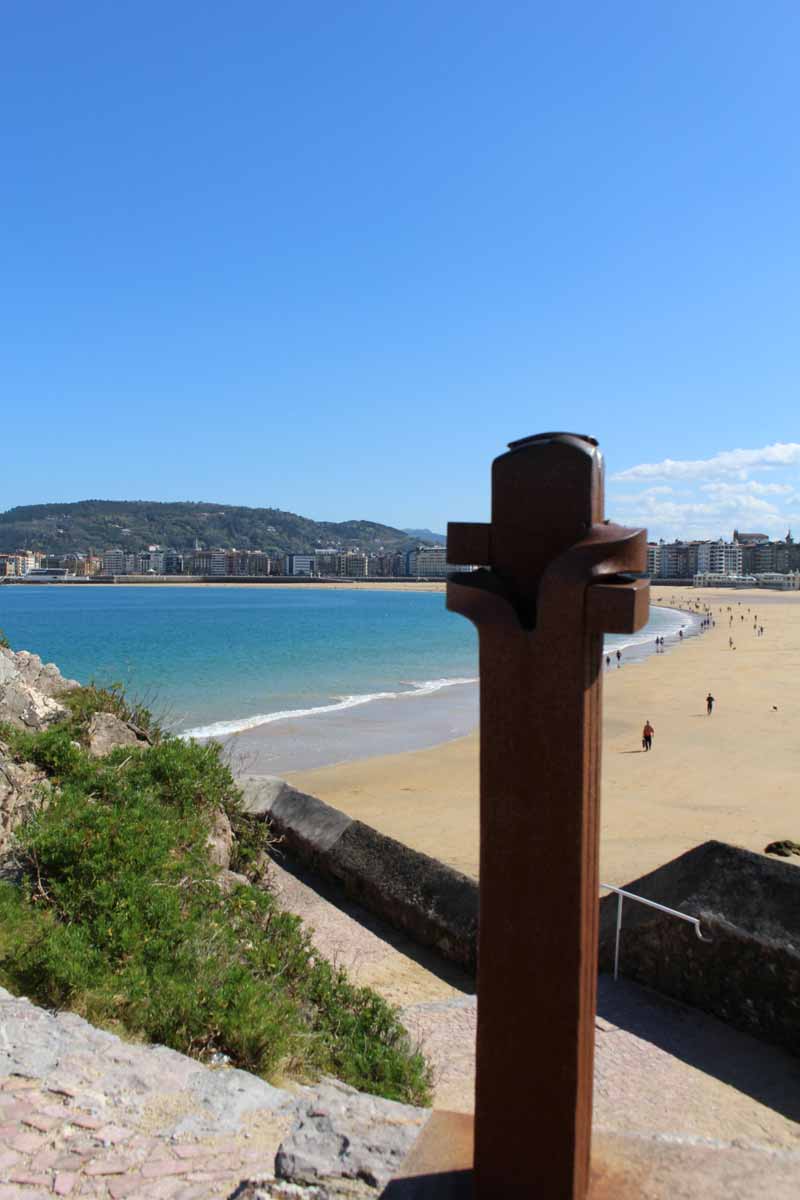 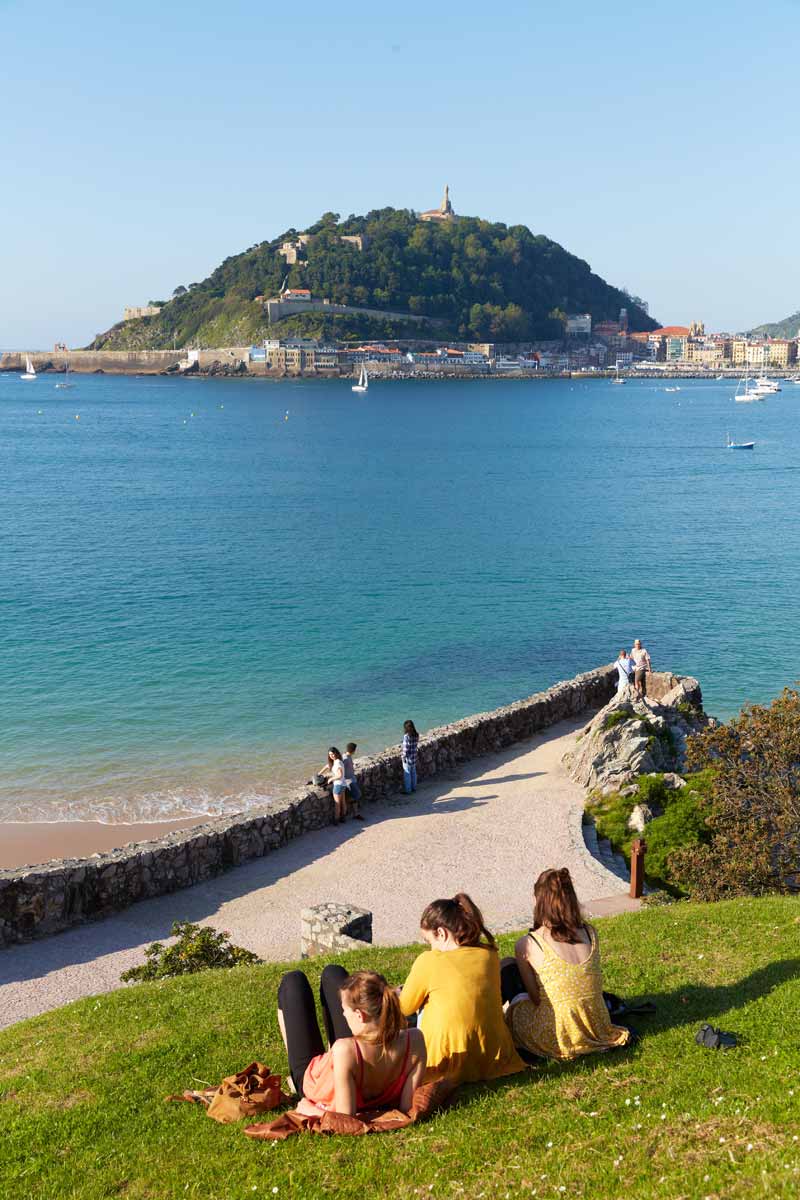 The gardens of Miramar Palace end in a rocky slope that separates La Concha Beach from Ondarreta Beach. At low tide it is possible to go down to the sand and cross from one beach to another by the shore.

ADonostians know this location as El Pico del Loro, but we're going to let you in on a secret: the truth is that this is not its original name. Its original name is Pico de Loretopea, and the name’s origins are in the hermitage to the Virgin of Loreto, which occupied the location until 1876 when it was moved to the Antiguo neighbourhood to allow for the construction of Miramar Palace.

A tunnel that wants to hear your opinion

When the sea reaches up as far as the rocks, we can use a magical tunnel located just below El Pico del Loro to cross from one beach to another. Mirart is a pedestrian walkway which will immediately make you feel as if you are under the sea.

As well as being a work of art in its own right, this also a “smart” tunnel because it allows you to interact with it. It provides information about the weather and can advise you about the current status of the beaches and the sea. But it will also ask for your opinion, so don't forget to take part in its survey.

If you get the opportunity, try to pass through the tunnel by night, because the lighting is spectacular. 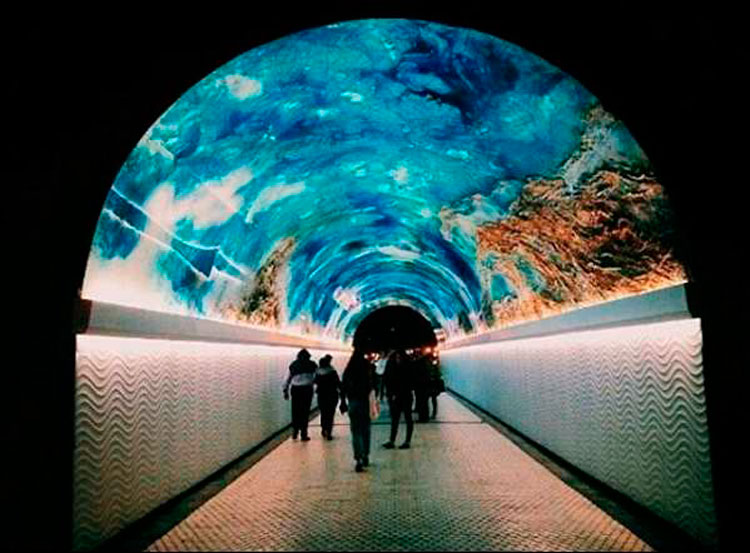 A very special homage by Chillida

Before entering the tunnel, at the very end of the Paseo de La Concha walkway you will see one of the other jewels of the city: a sculpture in honour of the inventor of penicillin.

Homenaje a Fleming (“Homage to Fleming") is another of the gifts that Eduardo Chillida bestowed upon the city. Although the design was completed in 1955, the year in which the Scottish scientist died, it was not until 1990 that Chillida sculpted the granite work that we can all enjoy today..

After being located at various different points within the city, it can now be found in a very prestigious environment: it presides over a lookout point over La Concha Beach, at the very end of the walkway. If you have a moment, sit down and take your time to enjoy the views from this spectacular location.

The “Homage to Fleming” sculpture by Chillida is located at a lookout point over La Concha Beach, close to Miramar Palace 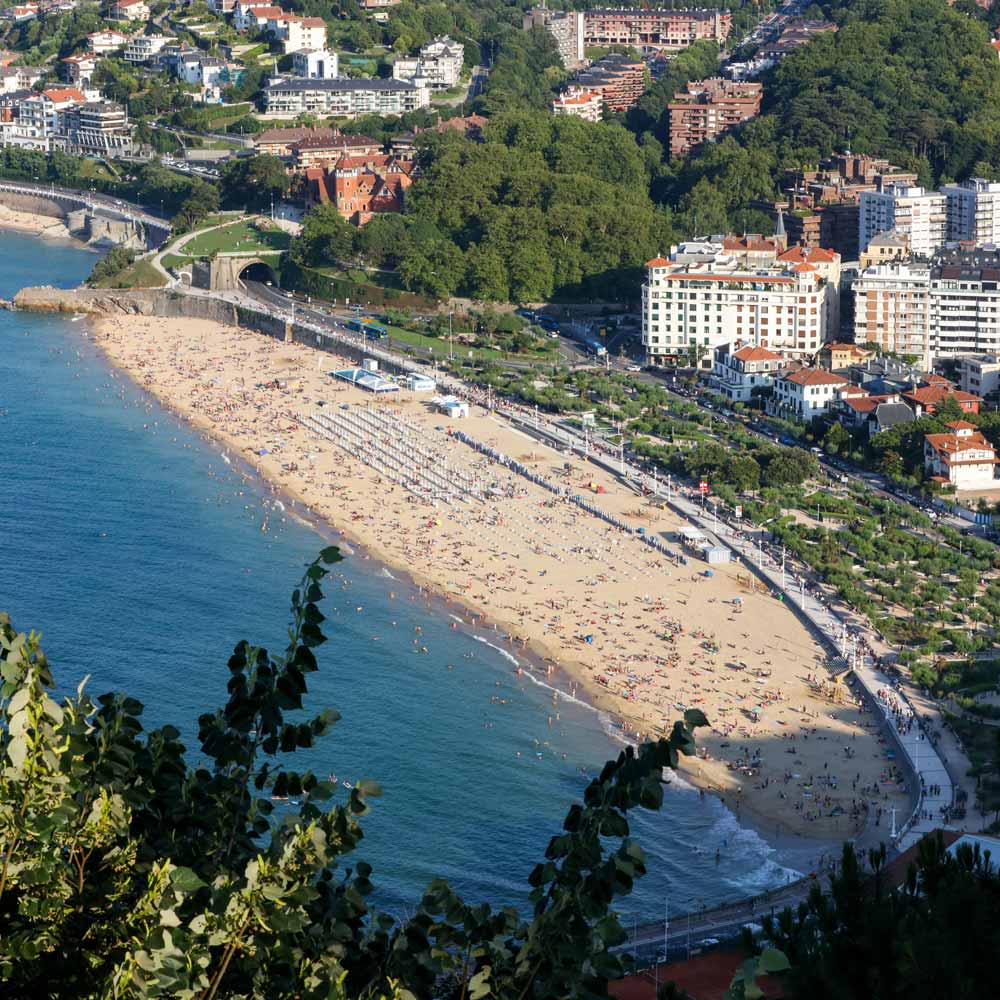 Ondarreta Beach with Miramar Palace in the background

Once you have passed through the tunnel, you will find the least-known beach out of the three: Ondarreta Beach. With its golden sands and blue and white striped tents, this beach has a vintage charm which makes it feel truly special.

Located at the foot of Monte Igeldo and facing Santa Clara Island, it is the perfect place to take a dip. Its moderate waves allow the more adventurous to swim out to the island in the middle of the bay.

A perfect beach for a walk - either along its shores, or through its beautiful garden-filled pathway - and a perfect place for sporting activities and swimming. This is a beach that can be enjoyed at any time of the year.

At Miramar Palace, history and architecture blend together with the green of the gardens and the blue of the sea, transporting you to an entirely different world altogether. Take your time, visit every corner and take a photo from every angle. You’ll see that no two perspectives are ever the same.