Art in open spaces, accessible to all, is one of the most representative aspects of San Sebastián. A stroll through the city will permit you to admire the work of great artists like Eduardo Chillida and Jorge Oteiza, compositions that blend with the urban backdrop to establish profound dialogue with their natural surroundings.

Excavated inside the hollowed-out lighthouse, Iglesias's work incorporates the peculiar geology and ecology of the Basque coast and the wild waters of the ocean that surround the island.

The work of Cristina Iglesias contributes a renewed conception of the sculpture practice. Her search for poetic and symbolic compromise between works and space, is always materialised in an aesthetic, visual and dynamic display.

Cristina Iglesias, form her own sculptural language, intervenes, and transforms a remote place converting it into a symbol for the defence of ecological causes and environmental conservation. 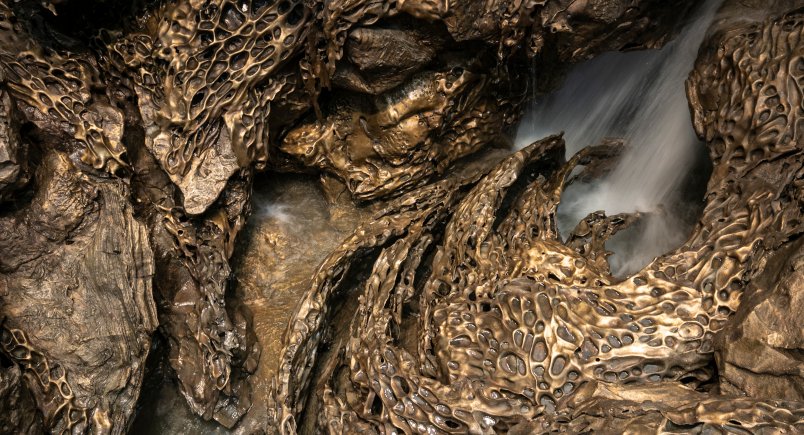 The work Hondalea in the lighthouse of Santa Clara Island

Created by the sculptor Eduardo Chillida (San Sebastián, 1924-2002) and the architect Luis Peña Ganchegui (Oñati, 1926-San Sebastián 2009), the Peine del Viento (Wind Comb) is the perfect example of beauty in its purest state, a profound dialogue between art and the landscape.

The fusion between the fierceness of the sea and the strength of the iron structures has elevated the natural character of this contemporary art work to a place of meeting and leisure for the locals and tourists. 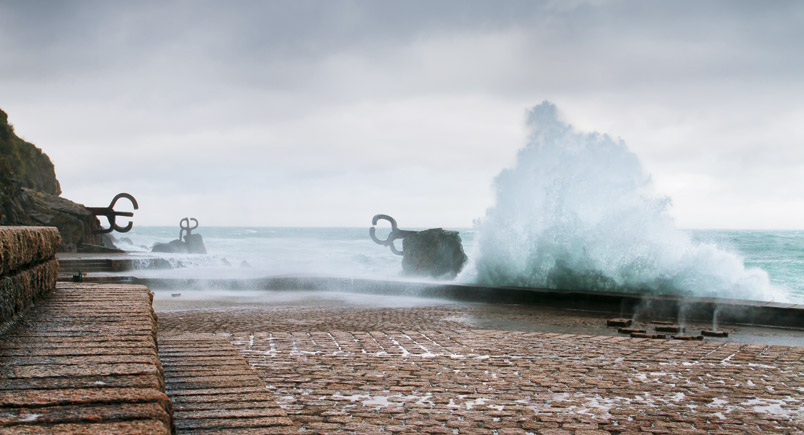 Defying the force of the sea, the impressive sculpture entitled Construcción Vacía (Empty Construction) by the artist Jorge Oteiza can be found on the Paseo Nuevo.

The work, winner of an award at the Sao Paulo Biennale half a century ago, is now a reference in the world of contemporary art; a real treasure within reach of everyone. 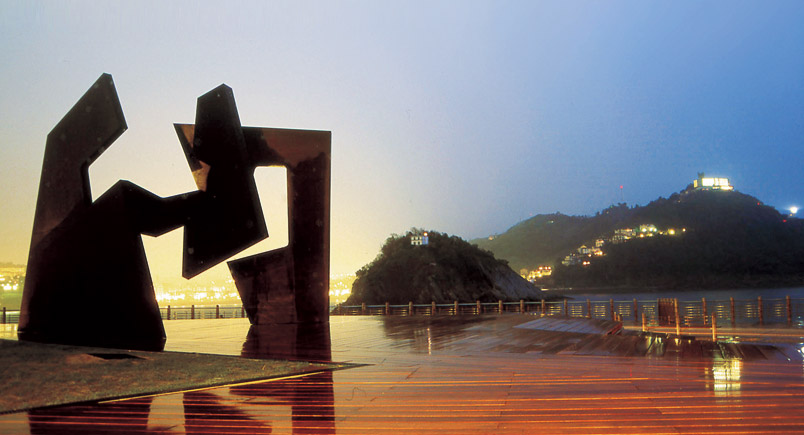 In the Zurriola promenade, looking at the sea, we found a 7 meters high sculpture entiteled Bakearen Usoa (Dove of peace) by the artist Nestor Basterretxea (Bermeo 1924-2014).

The sculpture was built in the 80s with the purpose of being a symbol of the commitment that the city has with peace, freedom and coexistence. 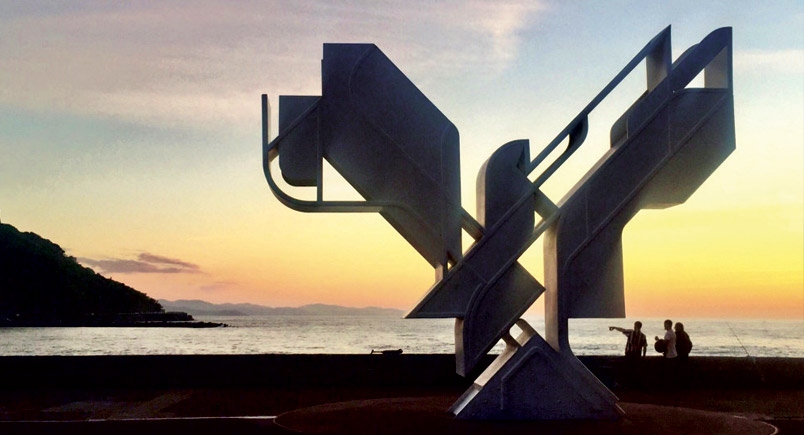 Dove of Peace in the area of Sagüés

Guarding the city from the top of Monte Urgull, the Sacred Heart statue merges with the landscape of San Sebastián.

The work, made by the artist Federico Coullaut in 1950, measures over 12 metres in height and can be seen from 4 miles out to sea. 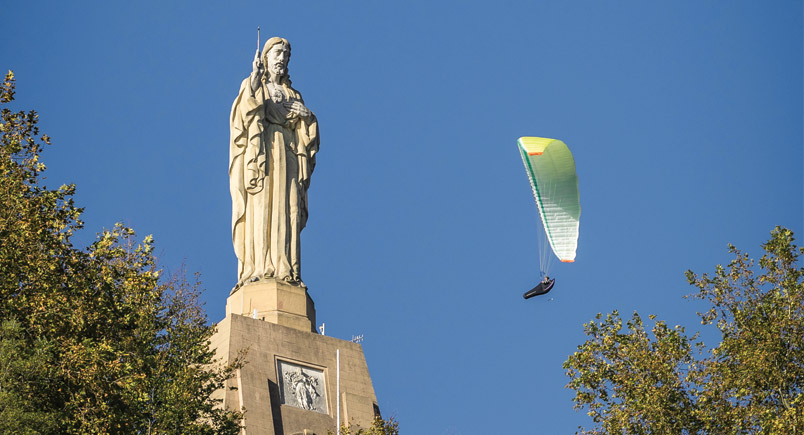 The Sacred Heart at the summit of Mount Urgull

In the centre of the Paseo de la Concha, artist Eduardo Chillida paid his own personal tribute to the inventor of penicillin with the sculpture, Homage to Fleming. The design was made in iron in 1955, year of the Scottish scientist's death. However, it wasn't until 1990 that the artist sculpted the granite work we know today. 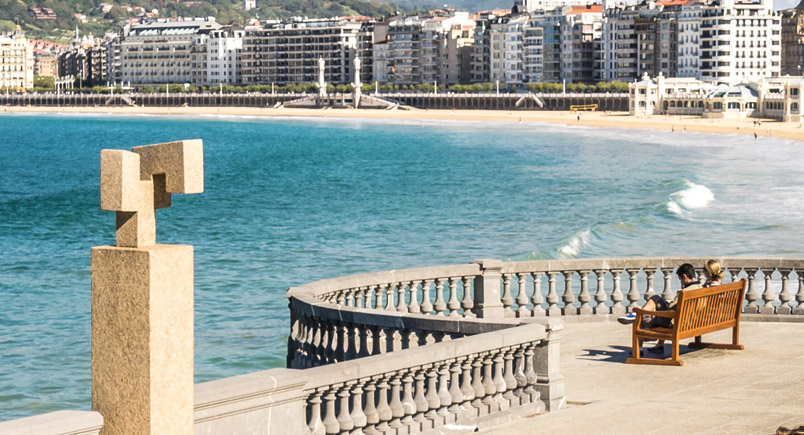 Homage to Fleming, by Eduardo Chillida, on the Paseo de La Concha 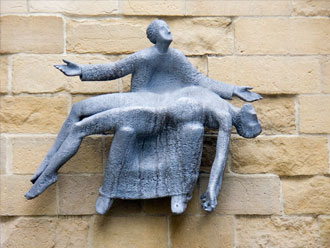 The Pietà on the facade of San Vicente Church

This work, based on Oteiza’s sketches for the frieze in the Sanctuary of Arantzazu, was made by the sculptor José Ramón Anda under the close supervision of Oteiza himself. The work was hung on the facade of San Vicente Church in 1999 to become the city’s first sculpture by Oteiza.

This work by Chillida was his gift to the Buen Pastor Cathedral to celebrate its 100th jubilee in 1997. The cross, carved from a piece of alabaster, maintains the original texture of the stone.

Go to the Sculpture Atlas App made by San Telmo Museum

"Walking around the city enjoying the sculptures of Jorge Oteiza and Eduardo Chillida is easier with this map that proposes a route from the Wind Comb to the Empty Building or the other way round, discovering the public works that Chillida and Oteiza have spread around the city". (Text: San Telmo Museoa)