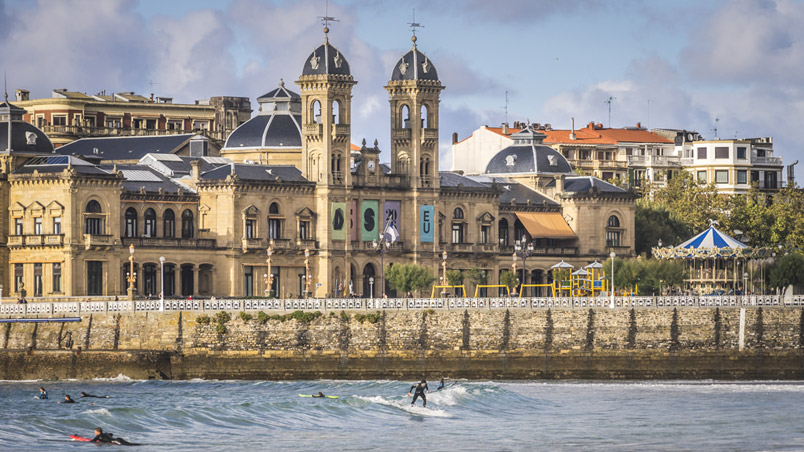 What is today San Sebastián's City Hall was home to the city’s Gran Casino from the time it was opened on 1st July 1887 until it was closed in 1924 with the prohibition of gambling. Its roulette tables and Dance Hall, currently the Plenary Hall, provided entertainment for politicians, writers and artists in the Belle Epoque period.

On 20th January 1947, the City Council moved its headquarters into the building from its former premises in the Plaza de la Constitución. Standing on the Concha Bay, with the non-stop hustle and bustle of the Old Town behind it and facing the quiet Alderdi Eder gardens, the Ayuntamiento is most definitely an obligatory stopping point. 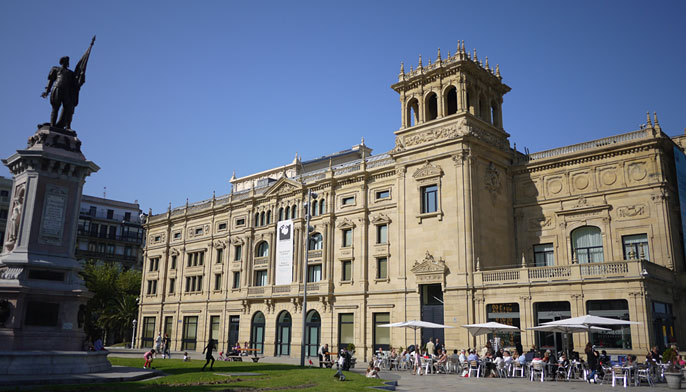 This sandstone building sporting plateresque motifs with Spanish Renaissance forms was created by the architect Francisco de Urcola in 1912. Particularly interesting on the facade are, over the Doric columns, four groups of sculptures representing the opera, tragedy, comedy and drama.

For decades the Victoria Eugenia Theatre has been the principal hub of the International Film Festival; since its renovation in 2007, the building now offers new cutting edge spaces and audiovisual technologies. 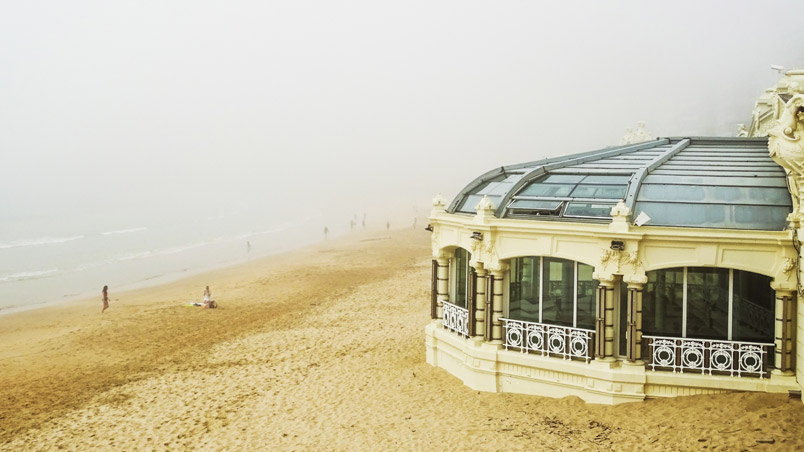 In the early 20th century, Queen María Cristina decided that San Sebastián was to be the royal summer home. To meet the aristocratic needs of the visit, a wooden spa was built, replaced in 1912 by a new spa building, considered by the newspapers of the time to be one of the most beautiful in the world.

The new spa project was part of renovations to the entire Concha Bay: the promenade was widened and the overhangs were created and enclosed to house the cabins for pulling the huts off the sand. It was also at this time that the new railings were designed.

In 1994 the spa area was once again rebuilt to give it the look as we know it today. 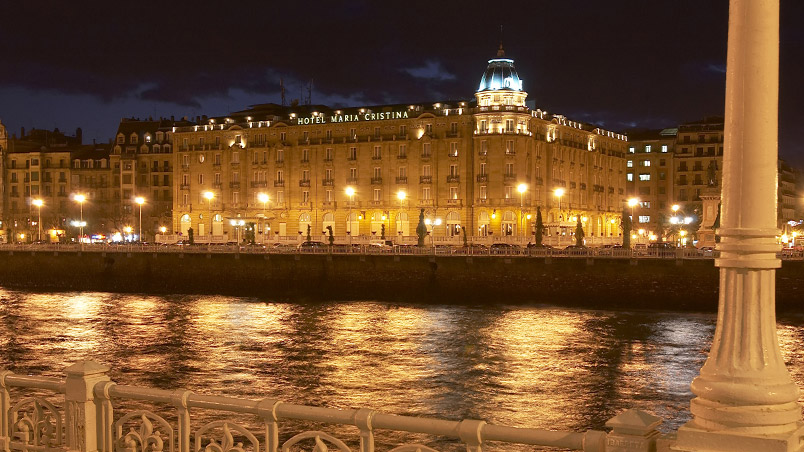 Hotel María Cristina from the other bank of River Urumea

Its design, the work of architect Charles Mewes (who was also commissioned to design the Ritz hotels in Madrid and Paris), location alongside the River Urumea and views of the sea, made this hotel an instant success with aristocrats in the Belle Epoque period. The building was originally “L” shaped. In the 50s, an extra wing was added to give it the “U” shape we know today.

After the Civil War and post-war periods, the Hotel recovered its splendour with creation of the San Sebastián International Film Festival. Since then, the film stars who visit the event have stayed here every year. In fact, being so close to the Victoria Eugenia Theatre means that the stars can make their way there by a red carpet, a distinctive feature of the Festival recognised worldwide.

In 2012 the hotel interior was completely refurbished, maintaining its iconic facade. 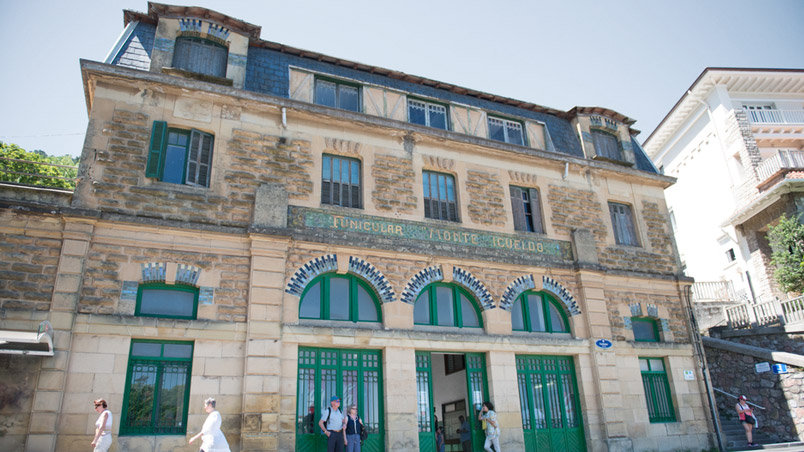 The funicular railway station has a particularly interesting facade; the public building has an access constituted by arches and a former shelter, no longer in existence today. Its public building aspect combines with the countrified look of a construction at one time located outside of the city, made with rusticated stonework and fine timberwork in the mansard roof.a. 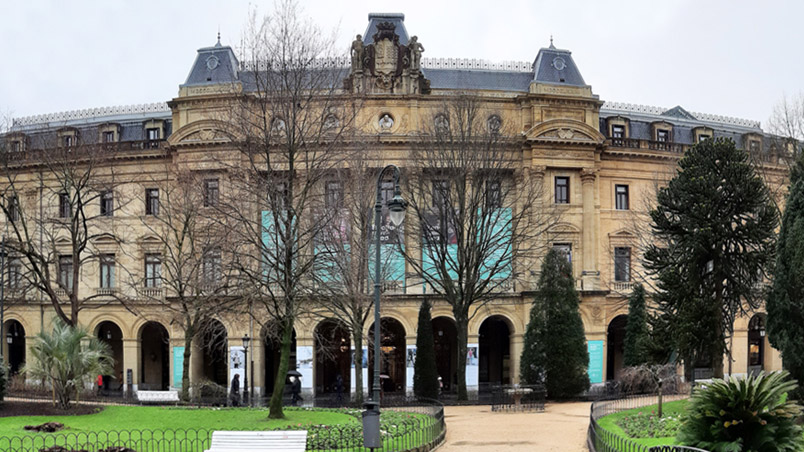 The Provincial Council building was designed in 1878 by the municipal architect José de Goicoa; it was completed in 1885. That same year it was almost razed to the ground by fire, only the facade and the foundations survived. Making the most of the aspects saved from the fire, a new project was started, finished in 1890.

The arches running round the outside of the building link it to the other buildings in the Plaza de Gipuzkoa. Its facade displays busts of several famous people from Gipuzkoa: Urdaneta, Elcano, Oquendo, Lezo and Legazpi. Above these is the coat of arms of the province of Gipuzkoa. 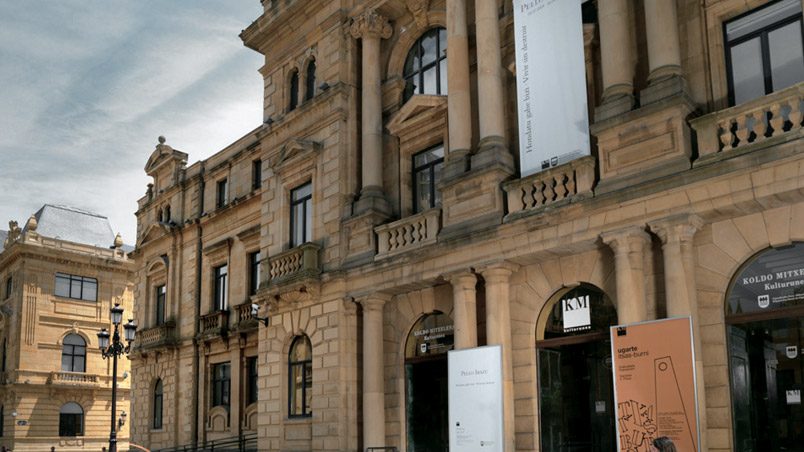 This building, opened in 1900, was built to house the Instituto Provincial de Segunda Enseñanza school. It subsequently became the University of Navarre’s Escuela Técnica Superior de Ingeniería, and in 1993 was completely revamped (except the facades) to house its present occupant, the Koldo Mitxelena Culture Centre (Koldo Mitxelena Kulturunea), dependent upon the Provincial Government of Gipuzkoa.