Recipes with a taste of San Sebastian

The most popular recipes from San Sebastián

If you’d like to taste San Sebastian’s local cuisine, here you’ll find a selection of mouth-watering recipes so that you can enjoy our finest gastronomy:

This is unquestionably San Sebastian’s best known pintxo, as tasty as it’s easy to make. Legend would have it that the pintxo acquired the name of “Gilda” in the ‘40s afterthe film of the same name. Just like the famous character played by Rita Hayworth in the film, the Gilda is sensual, spicy and curvaceous. 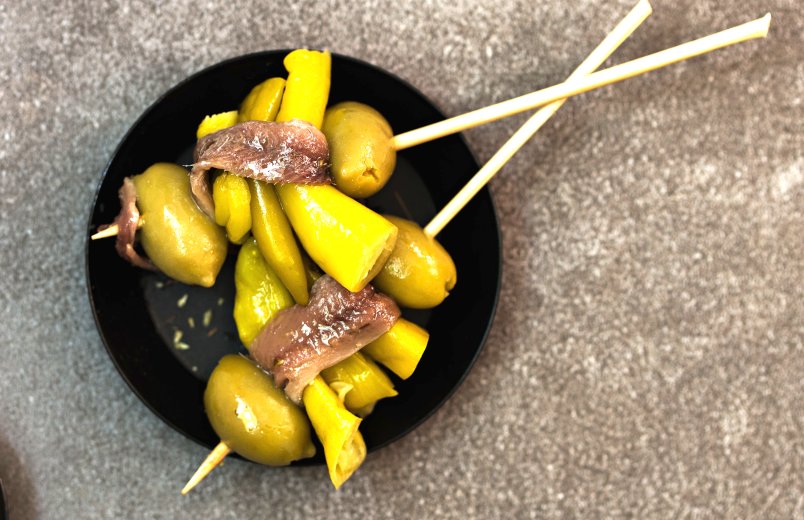 Simply thread the ingredients onto a cocktail stick as follows: olive, guindilla pepper (you can cut it in half), one small anchovy folded in half and another olive.

The most important thing about this pintxo is that it must be eaten in a single mouthful so that all the flavours mix in your mouth. You’ll discover a real delicacy!

“Hake à la donostiarra”, also known as “Hake koxkera-style” or hake in green sauce, is a traditional dish in the Basque Country. Together with pil-pil, green sauce is one of the Basque gastronomy basics. A dish born from the dedication and time spent by women in the kitchen. It was first mentioned in 1723 and its creator was Plácida de Larrea. 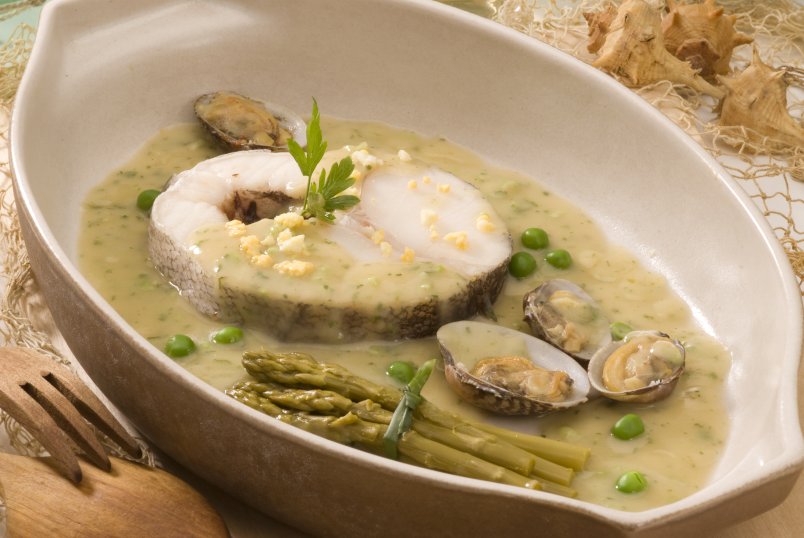 The first step in preparing this delicious hake dish is to make a stock with the discarded parts of the hake (head, stomach and tail) in a pan with water, parsley, oil and salt for approximately 15 minutes. Don’t forget to ask your fishmonger to give you these leftover parts when they clean the fish.

Boil the eggs in a separate pan for 10 minutes. Allow to cool and set aside.

Cook the clams in a third pan with a little of the fish stock and a dash of oil until they open.

Meanwhile, chop the garlic and the white onion. Heat a frying pan with a little oil and gently fry the garlic until golden. Immediately it starts to colour, add the white onion and leave to sweat; add 2 tbsp flour, sauté, and add 300ml of the previously prepared fish stock plus the liquid from the clams.

Next, season the hake fillets and add them to the sauce. Cook for 3-4 minutes.

Lastly, add the peas (tinned peas can be added immediately, but fresh peas must be cooked before adding), clams, asparagus, eggs cut into quarters and a little more parsley.

Although this dish is traditionally served with no garnish, it has gradually been enriched with the addition of clams, prawns, eggs, asparagus and hake cheeks.

“Crab à la donostiarra” is one of the few dishes that doesn’t have its origin in traditional Basque cuisine. Its creator is thought to be the chef from San Sebastian, Félix Ibarguren who, in the early 20th century, took his inspiration from Lobster à Américaine, one of the most popular recipes of the time, to create this fabulous dish. 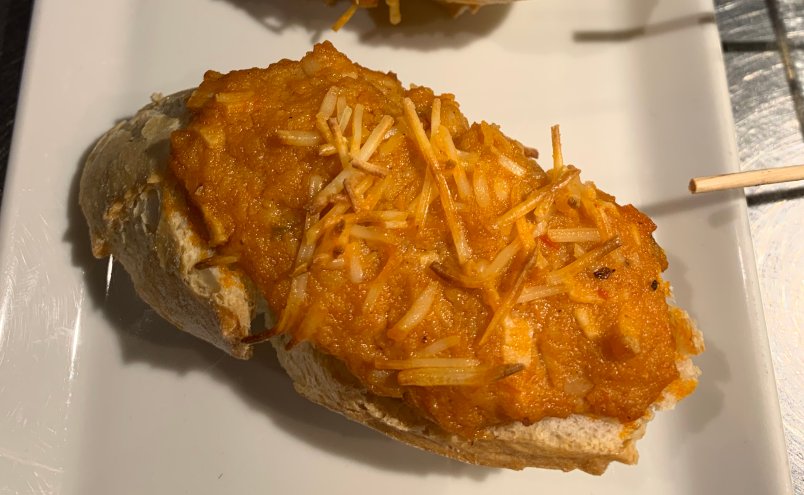 Cook the crabs in water with abundant salt, approximately 50g per litre of water. When the water comes to the boil, add one of the crabs and leave it to cook for approximately 10 minutes. Remove the first crab and add the second one, also leaving it for 10 minutes.

Leave the crabs to cool. Meanwhile, finely chop the onion. Peel and chop the tomato.

You can now remove the flesh from the crabs; this task requires patience and quite a lot of work to remove all of the flesh. Start by removing the meat from the claws and the shell and put them aside in a dish to use later. Open the body very carefully so as not to lose the liquid inside it.

Heat a little olive oil in a frying pan and fry the onion until it turns a golden colour. Add the garlic cloves and the chopped tomato and cook for 5 minutes. Add some breadcrumbs and the ½ glass of brandy; flambée the mixture. Be careful not to add too much salt as the sea water tends to make the crab meat a little salty.

Wash the shells and fill them. Sprinkle the mixture lightly with breadcrumbs and top with a small knob of butter. Bake for 10 minutes until golden brown.

If you want to surprise your guests,this dish will never let you down!

Cod in pil-pil sauce is a simple but highly appreciated recipe in our gastronomy. Pil-pil is unquestionably Basque cuisine’s most famous sauce and the name comes from the sound it makes when hot and bubbling. 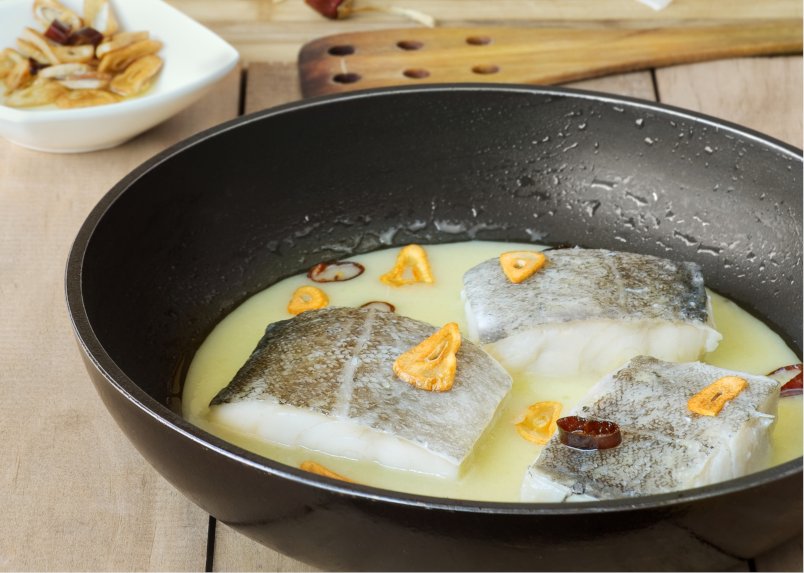 Fry the garlic, whole or sliced, until golden brown in a pan with abundant oil. Remove from the oil and set aside.

Use the same oil to fry the chili, previously sliced. Remove when ready and set aside with the garlic.

Also in the same oil, cook the cod fillets first of all with the skin side up, then gently turn them over to cook the other side. Remove from the pan.

Now it’s time to thicken the sauce! Allow the oil in the pan to cool for 5 minutes and add the liquid released by the cod fillets. Using a sieve (which will help to do the job fast and easily) thicken the sauce using circular movements.

Serve the sauce on a plate, top with the cod and add the garlic and chili. Bon appetit!

Although today we consider this dish to be a real delicacy, in fact it was created to make the most of the unwanted parts of the fish. Thanks to traditional cuisine, today we can enjoy this delicious dish!

The first historical reference made to this dish is to be found in San Sebastian’s Kañoyetan society, in 1902. Apparently Queen María Cristina wanted to taste this fabulous local dish she had heard so much about, but given that women were forbidden to enter gastronomic societies, it never came to be... However, the story goes that the society later had a little dish of hake cheeks delivered to her at the Miramar Palace. 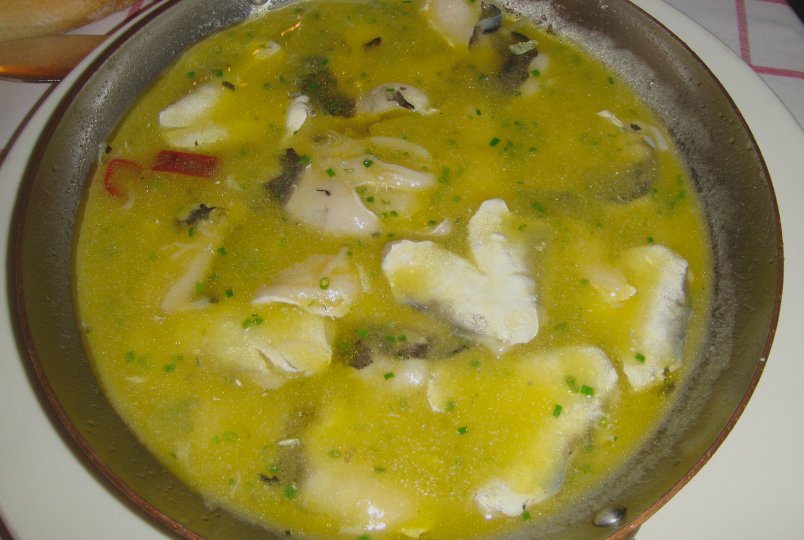 Clean and remove the excess skin from the cheeks with a sharp knife.

It is important to remove the water from the cheeks. To do this, wrap them in a cloth until dry and then season them.

While the cheeks are drying, chop the parsley and slice the garlic and the chili.

Make a stock with the rest of the cheeks, the parsley, 2 cm of water and a little salt, this will give the dish more flavour. Reduce over a low heat.

In another pan, gently cook the garlic until golden brown with the chili and set aside when ready. Add a tablespoonful of flour to the oil and sauté; pour in the white wine and the stock prepared in the other pan.

While stirring, add the parsley and the cheeks. Cook for 2-3 minutes and finish by adding the garlic and the chili. Remember that this dish must be eaten very hot!

Baby squid in their ink

Baby squid in their ink is one of the most iconic dishes of traditional Basque cuisine. The blackness of its sauce makes this a mysterious dish for many, and some even claim that it didn’t come into existence as something to put on a plate, but as part of a ritual involving sorcery. 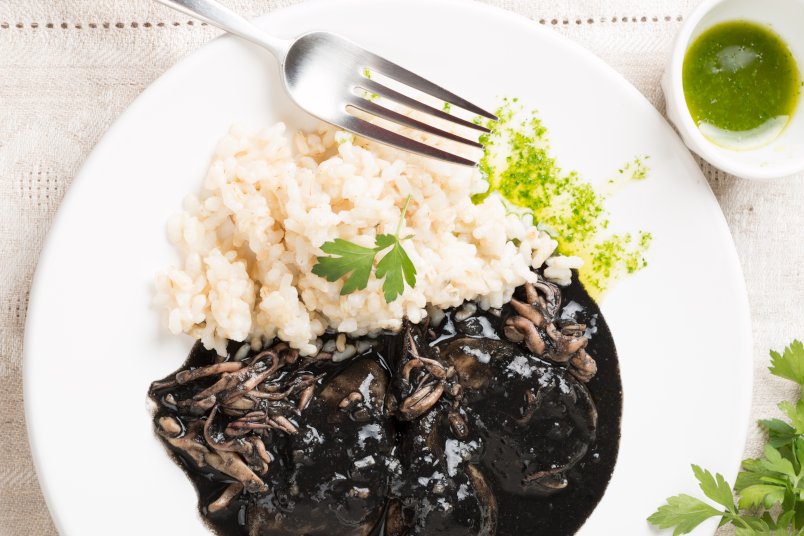 Firstly, carefully clean the squid. To do this, cut off the tentacles, pull out the clear skeleton, remove the eyes and the mouth. This should be done carefully so as not to break the ink sac. Once clean, rinse in running water and dry.

Set aside the ink sacs to use a little later. Remember that these sacs are sometimes very small and that they don’t always have enough ink to prepare the dish. If you don’t have enough or if you puncture one of the sacs when cleaning the squid, we recommend that you buy cuttlefish or squid ink separately, in sachets.

To make the sauce, chop the onions, the tomatoes and the garlic and sweat in a pan for 20 minutes.

While the sauce is cooking, use a mortar or knife to flatten and puncture the sacs. Remove all solids, add a little water to dilute the mixture and add to the sauce after the 20 minutes.

Blend the sauce for a lighter result and to remove all traces of tomato skin.

Return the sauce to the pan and add the baby squid. They’ll be ready to eat in 35-40 minutes! This dish can be served with a little white rice if desired.

Baby squid in their ink can also be made with the larger begihaundi squid. The steps to be followed are the same, but after cleaning the squid you should cut it into pieces.

Although Peña y Goñi, the great sports chronicler and writer from San Sebastian, wasn’t mistaken when he said that “the best sea bream you’ll ever find to eat is in San Sebastian, as otherwise it will lack the essential ingredient, the one that can’t be prepared or brought in from somewhere else. It will lack the smell of the sea, the pedigree of freshness, the certificate of virginity, the death certificate smacking of maritime sanctity...” today you can find excellent quality fresh fish with which to prepare fine quality baked sea bream at home. 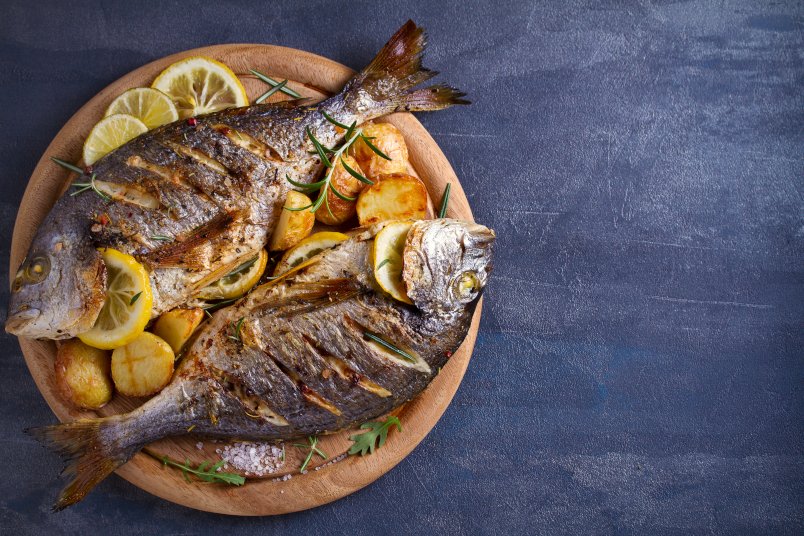 Meanwhile, clean the sea bream and cut the potatoes into fine slices. Fry the previously sliced garlic cloves until golden together with the chili.

Bake the potatoes for 10-15 minutes and remove from the oven. Add salt and pepper to the sea bream, drizzle with oil and return the dish to the oven for 20 minutes. Remove the dish for the last time and add a dash of vinegar.

Lastly, add thefried garlic and chili mixture to the top of the sea bream.

And now we come to the desserts... where we couldn’t forget San Sebastian’s typical Pantxineta, an exquisite pastry stuffed with pastry cream. 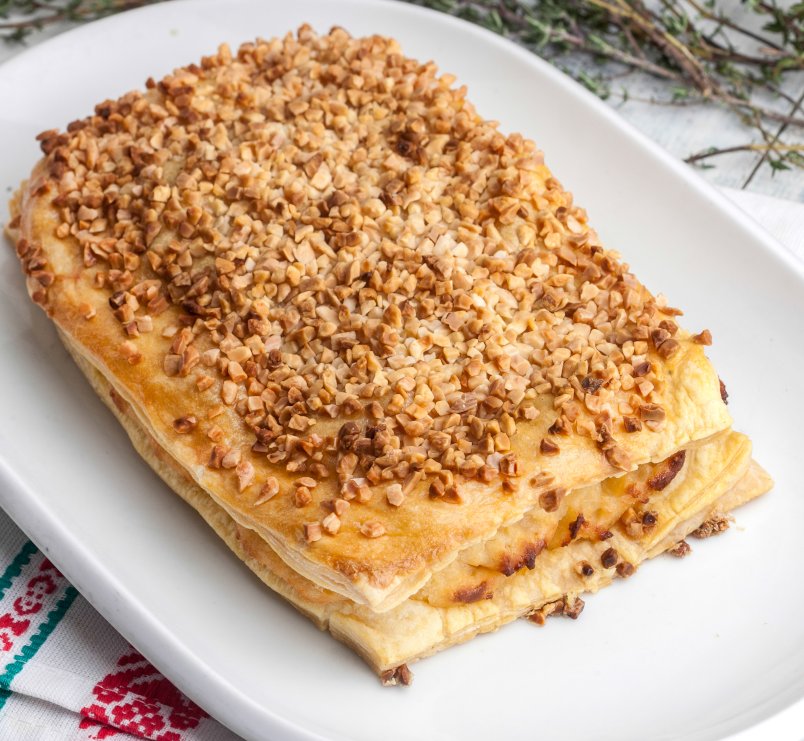 Prepare the pastry cream by heating milk in a saucepan with a little piece of orange and lemon rind, the cinnamon stick and the butter.

Pour a little of the infused milk into a bowl, add the sugar and cornflour gradually while mixing with a whisk. Add the egg whites while continuing to mix.

Still stirring, add the mixture to the saucepan with the milk and heat. When it starts to boil, reduce the heat and wait until the mixture thickens. Return to the bowl and leave to cool.

While the cream is cooling, place half of the puff pastry on the oven tray (previously coated with greaseproof paper), brush the edges of the pastry with egg yolk and pour on the pastry cream. Cover with the other half of the pastry and carefully seal the edges. Coat the surface with the remaining egg yolk.

Sprinkle with icing sugar and almonds before baking. Bake for approximately 49 mins at 160º.

You’ll find it hard to beat eating a slice of recently baked pantxineta while still warm! But watch out, it’s very moreish!

The cheesecake made by San Sebastian’s La Viña bar, also known as the “Burnt Basque Cheesecake” or “San Sebastian Cheesecake”, created by Santiago Rivera, enjoys so much widespread fame and has so many fans all over the world, that we have given it its own post. Don’t miss the recipe of the world’s most famous cheesecake! 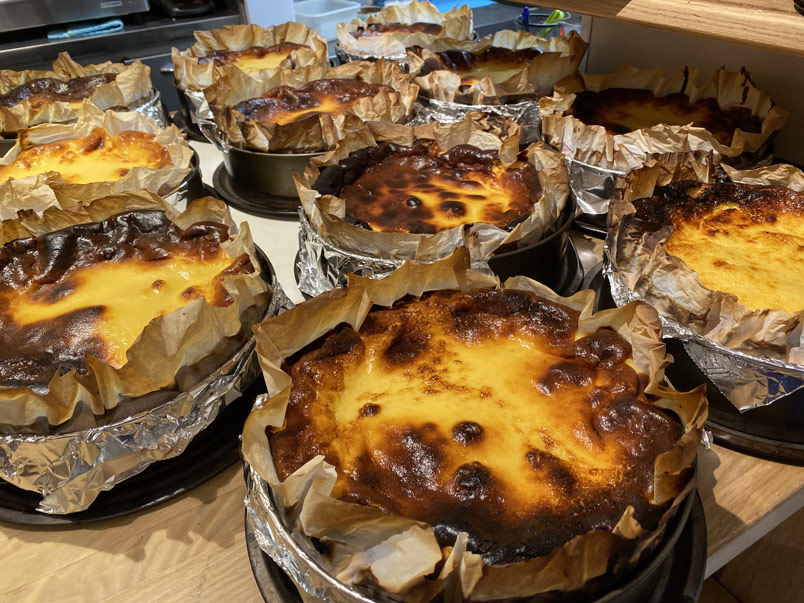 Do you think we’ve missed out a dish? What’s your favourite San Sebastian dish?