There are over 15,000 registered dogs in Donostia / San Sebastian… wow! For a city like ours, with under 200,000 inhabitants, that’s a significant number. In fact, the love we have for our four-legged friends is plain to see on the city's streets, beaches and mountains. So, if you are thinking about coming to visit us with a canine friend, rest assured that you’ll be given a warm welcome by the dog lovers in San Sebastian. 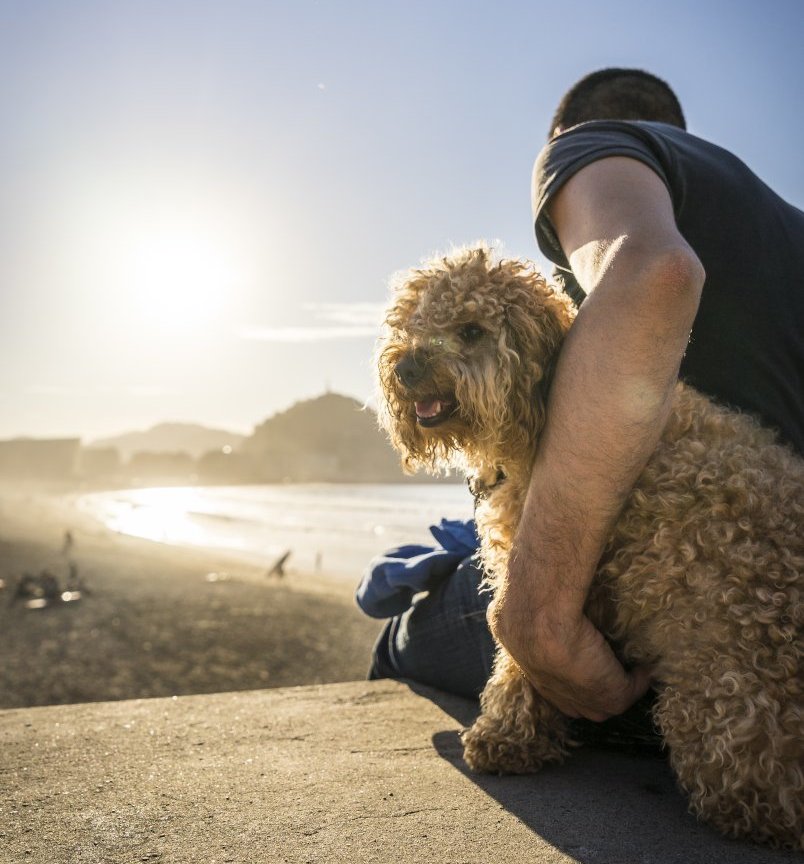 However, before you leave, we want you to have the information you need to travel hassle and trouble-free. We believe that knowing the rules and policies on pets in the different places that you might visit in the city is important for making sure that you have an unforgettable experience in Donostia / San Sebastian.

There is a growing number of dog-friendly accommodations in Donostia / San Sebastian. We want you to enjoy the city together with your loyal canine friend, so take a look at our list of accommodations, where comfort is guaranteed for all of the family. You will see the dog icon in the info about the accommodations where they are allowed: 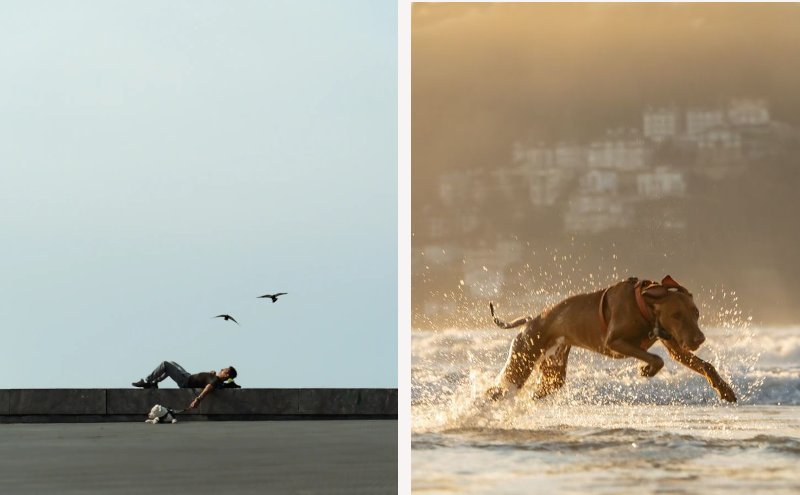 In Donostia / San Sebastian you can reach almost any part of the city by taking a pleasant stroll. The streets are made for it and you can get around easily with your pet.

In any event, if you ever need to use public transport, take note of the different options available in the city. 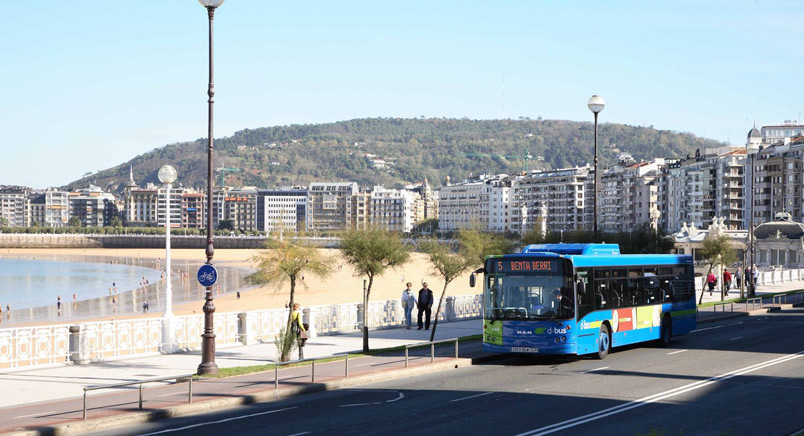 People from San Sebastian often use buses to get around, because, all told, they get you to any part of the city quickly and easily. Small dogs are allowed on city transport if they travel in your arms or in a carrier.

If you fancy exploring any of the many charming spots we have around Donostia / San Sebastian, it is a good idea to use the local trains. Also, train journeys always have that whimsical feel, which enhances the experience.

Dogs are allowed, regardless of size. They must be kept on a lead and be muzzled or in a carrier. One dog per passenger.

Dogs are allowed, regardless of size. They must be kept on a lead. PPPs* are not allowed.

When taking a taxi, we recommend calling the phone line and telling them that you have a dog with you, so that they can send a dog-friendly taxi.

If you want to go to Mount Igeldo’s iconic amusement park, you can do so on its equally iconic wooden funicular. It’s more than just transport, it’s a real experience, a journey to a bygone era. Highly recommended! You can travel on the funicular with your dog if you keep it on a lead and pay an extra fare of €2.50

Can I Let my dog off the lead?

Among many other things, Donostia / San Sebastian is known for its unbeatable location, between the sea and the mountains. It has three beaches and three city mountains, which you can enjoy at any time of the year. Of course, you can do this with your pet, as long as you follow the rules in each place. Ah, and don’t forget that there are rules that have to be followed in all of the areas provided for canine recreation: 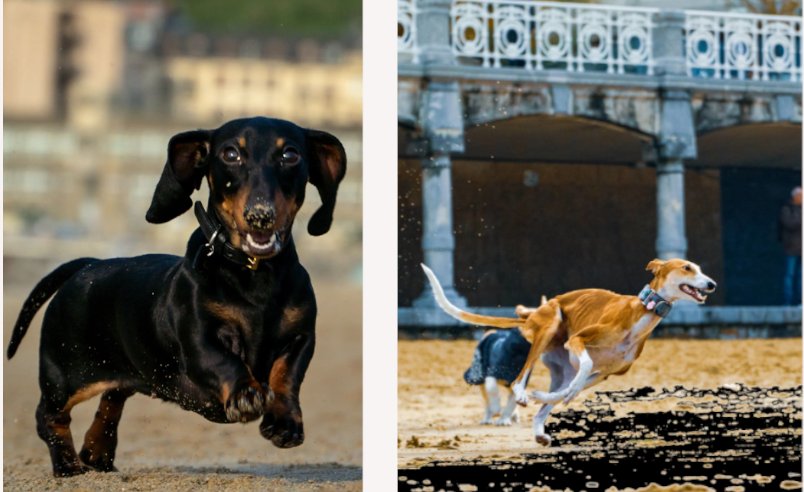 Running along the beach is one of life’s greatest pleasures for our four-legged friends. Indeed, doing it along the beaches in Donostia / San Sebastian is a real treat.

You can take your dog onto our three city beaches (Ondarreta, La Concha and Zurriola) (except for potentially dangerous dog breeds), when it is outside the bathing season: from 1 October to 30 May. It is forbidden at all times during the bathing season. 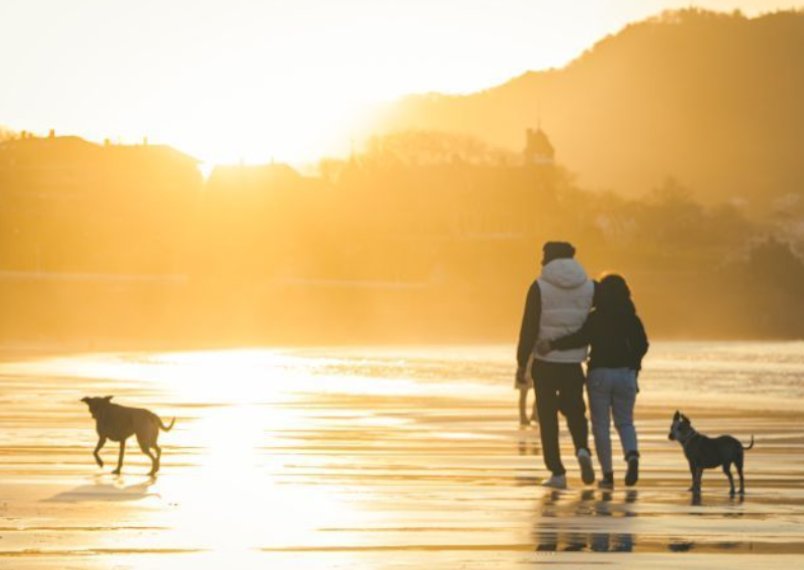 There is also a lovely beach on Santa Clara Island, but in this case dogs are forbidden throughout the year.

Donostia / San Sebastian’s city mountains are also iconic. They each have their own distinctive features and they are well worth a visit at any time of the year. You will be able to take in the scenery and wild nature, just a stone's throw away from the city. Igeldo, Urgull and Ulía, which one do you prefer? 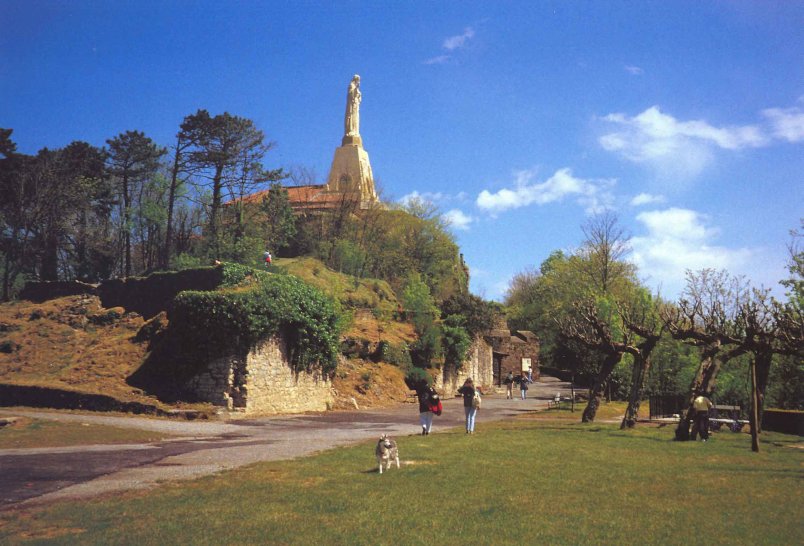 “Christ's” mountain (the Sacred Heart), in the centre, so widely photographed. It has Mota Castle, surrounded by restored fortifications and cannons, and the stunning views of the bay, making it one of the city’s must-sees.

You can access it from the Paseo Nuevo, at the back of the Aquarium, from Plaza Zuloaga (next to the San Telmo Museum) and from the rear of the Basilica of Santa María. 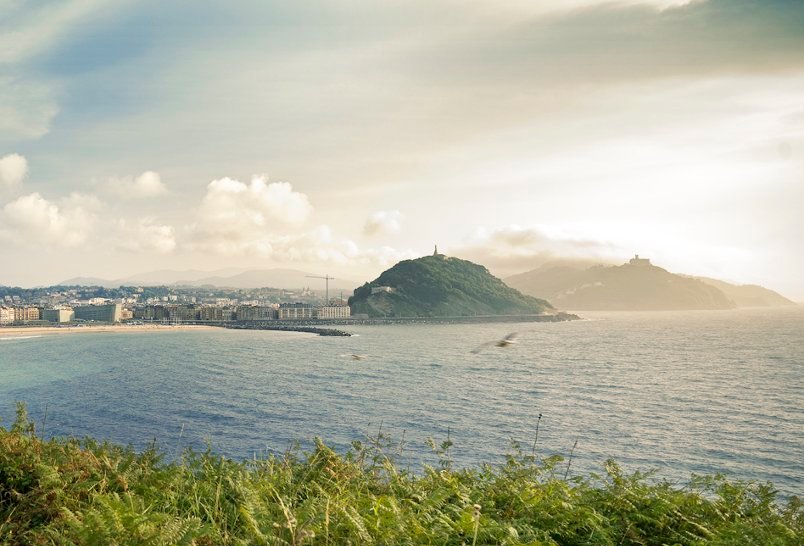 Mount Ulía is in the Gros area and you can access it from one end of Zurriola Beach, the one closest to the Sagüés area. This is the “wildest” of the three mountains. There are many possible routes, although the one that takes you to Pasaia is definitely the best known one.

Dogs can be let off the lead on Mount Ulía between 18:00 and 12:00 throughout the year (except for dogs from breeds that are considered potentially dangerous). 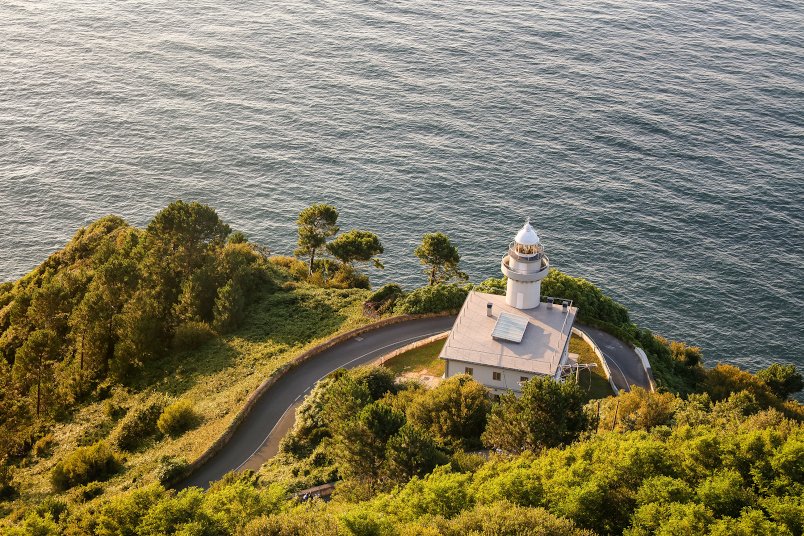 On Mount Igeldo we have our iconic vintage amusement park, which we highly recommend. As well as the fun rides, which are suitable for all ages, the panoramic view of the city will leave you breathless. Dogs are allowed on the funicular and in the park, but they have to be on a lead and, if they are from potentially dangerous dog breeds, they must be muzzled. 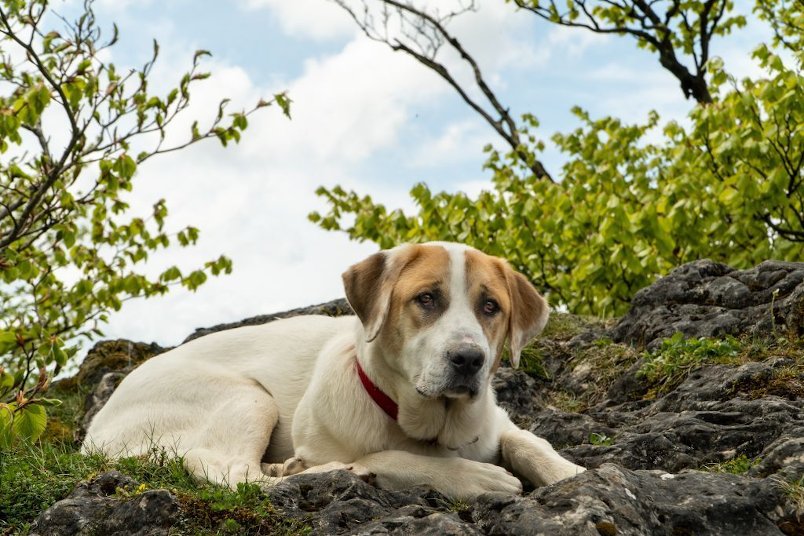 In Donostia / San Sebastian you will find green areas everywhere you go. We don’t only have beautiful scenery and areas for canine recreation in the city mountains. We are lucky enough to have numerous large parks, where you can go for a pleasant stroll.

Below there is a list of the parks where dogs can wander around at their leisure between 18:00 and 12:00:

This is in the highest part of the city, between Aiete and the hospital area. Back in the day, it was full of farmhouses surrounded by nature. Although it has now become the Donostia / San Sebastian Technology Park, it still has large green spaces that reveal its true essence. It is surrounded by woodlands and trails. You can get to the park by bus.

This is a real green lung. It has 602 hectares, of which 297 belong to Donostia /San Sebastian (207 ha and 98 ha belong to Errenteria and Astigarraga respectively). It is in the south-eastern part of the city, on the outskirts, very close to Gipukoa’s inland mountains. Because it is so large, you can go on long walks and it gives you the feeling that you are in a natural space that is away from the city.

Otxoki Park is in the Intxaurrondo area, very close to another park mentioned below, Ametzagaina. It has a playground and beautiful meadows where you can take your four-legged friend.

Next to the Miramón Park, it is one of the city’s largest. A green lung which has a fort that was built in the First Carlist War (1838) and it is well worth a visit. Lots of locals take their dogs to the park.

**Guau Park, the park of all parks

Finally, a park that is designed especially for dogs. You won’t find any swings here, only agility circuits for dogs to enjoy while they exercise.

You can find it on Calle Gregorio Ordoñez Kalea, in Amara. 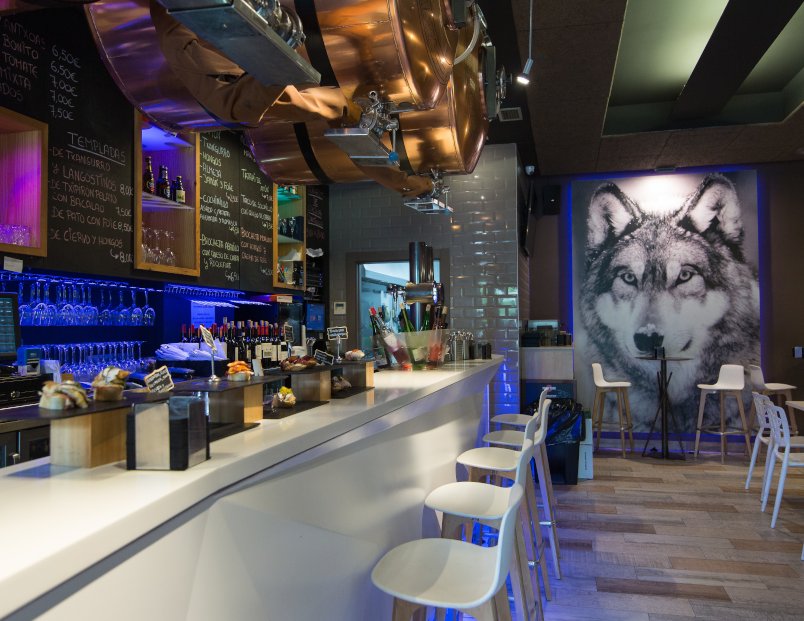 In a city that could be considered the Mecca of food, there are lots of bars and restaurants where you can go with your four-legged friend. In any case, we recommend contacting the establishments directly, in case their entry policy has changed.

We hope that these tips help you to get the most out of your stay in our city, so that your canine friends ask you to come back and visit Donostia / San Sebastian again.