A fairy-tale city rising from among parks and palaces

Just like in those children’s stories about lands where kings and queens live alongside peasants, Donostia arose and grew until it became the city we know today, rich and varied in the broadest sense of the words.

This is how it remains, safeguarding secrets and magic spots, lakes and paths that feel like being in the heart of nature, not the heart of the city.

The guided tour through the city’s parks and palaces provides an opportunity to discover all the history behind two of Donostia’s most iconic buildings while following an authentic urban walking tour at the same time.

Leave the car behind: all you need is comfortable shoes and clothes to go from being in the centre of it all to being in a peaceful haven of lush trees and flowers. 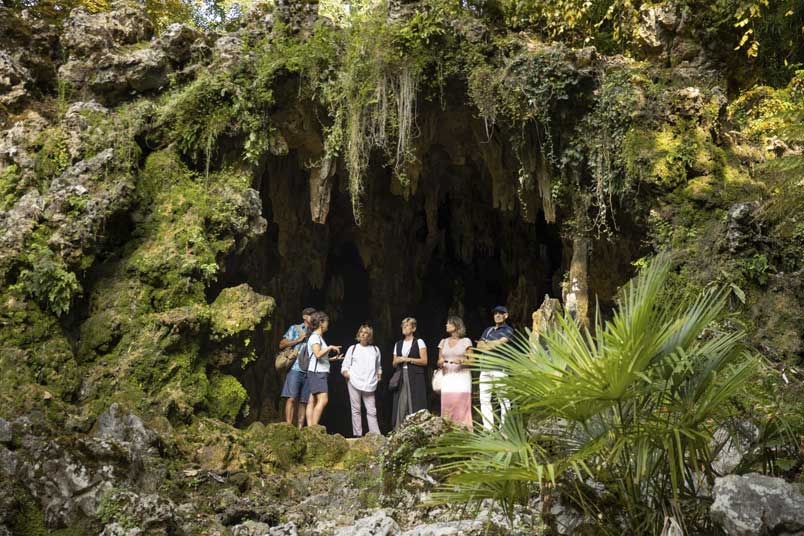 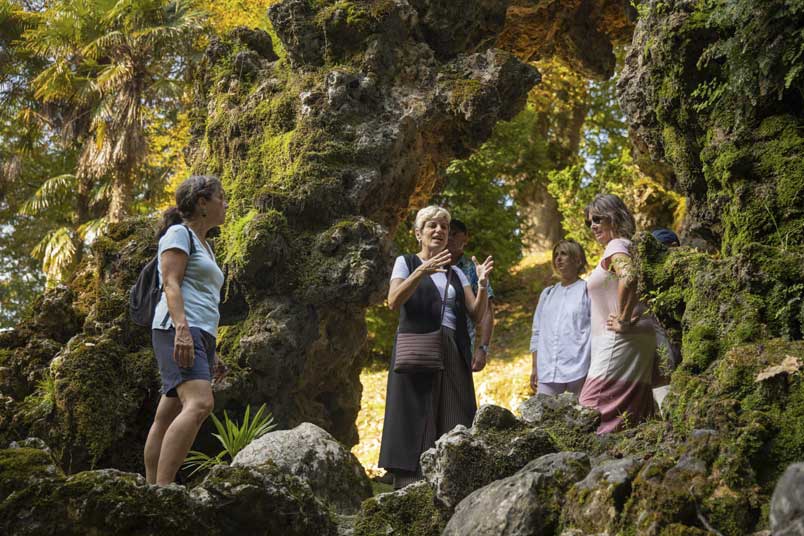 The tour started in the Amara neighbourhood, where there is a little-known, hidden gateway to Aiete Park, a discreet yet charming entrance that opens up between the houses in the Morlans district.

But wait! Take a minute to stop and look around you before stepping into the park. Evidence of the city’s past can be found tucked between the new buildings where the neighbourhood begins. Like a massive warehouse that used to belong to the old gas factory. And did you know that this area was once a valley through which the water flowed into the city?

This is one of the interesting facts that our guide Amaia revealed throughout our adventure. A two-and-a-half-hour adventure that took us from the city’s modern spaces to the Donostia of houses and palaces. 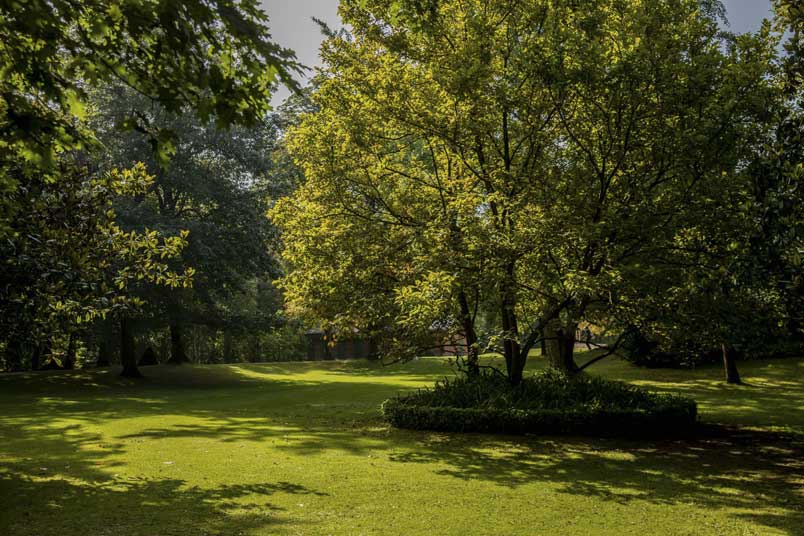 There we find traces of old houses, where men and women once lived and looked after their animals or farmed the land to sell their crops, but also served the aristocracy who stayed in the palaces, forging a connection between two seemingly opposing worlds.

When you pass through the gate, you lift your foot off the asphalt and step onto a path which, even though it doesn’t have yellow bricks, leads to a fairy-tale destination.

The climb along the path is shaded by enormous trees that seem to be looking over the park.

Our guide, who had 20-plus years of experience, taught us about the trees and their origins and how to tell them apart by their leaves. 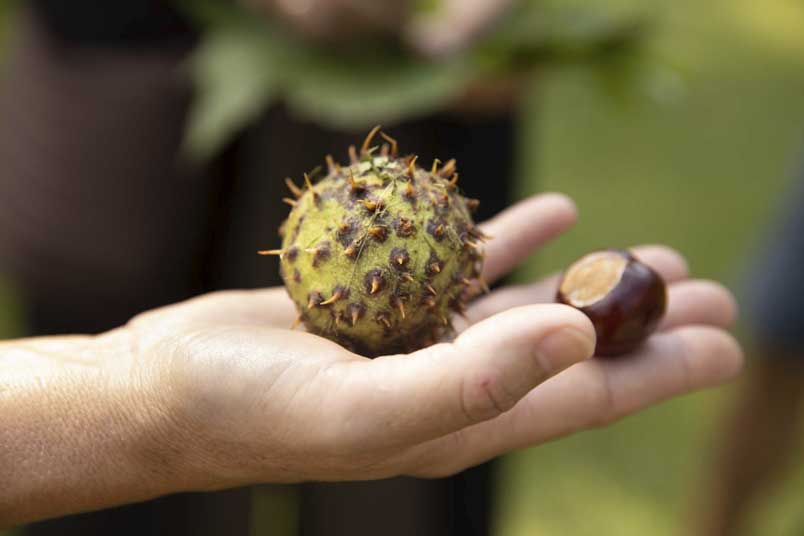 Aiete Park is home to native trees as well as species imported from the world over. Hundreds of maples, beeches, oaks, magnolias, and ginkgo bilobas grow alongside several sequoias, and one of these sequoias is catalogued as the tallest and thickest tree in Donostia. 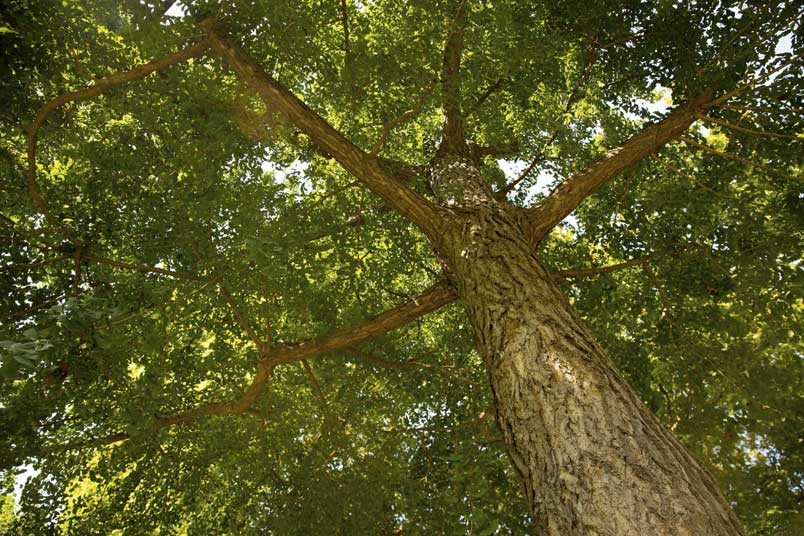 Have you ever hugged a tree? We couldn't resist. If you’ve never tried it you should: they say that when you hug a tree you absorb all of its good energy. Hug one and see for yourself!

And after exploring the outdoors with our sight, smell and touch, we let those senses rest to sharpen our hearing and immerse ourselves in the history of Aiete Palace.

A large white palace arose before us from among the leaves, the sometimes summer residence of Queen María Cristina and the place where historical figures like Isabel II, Alfonso XII, Alfonso XIII and the British monarch Alejandra Victoria have stayed. 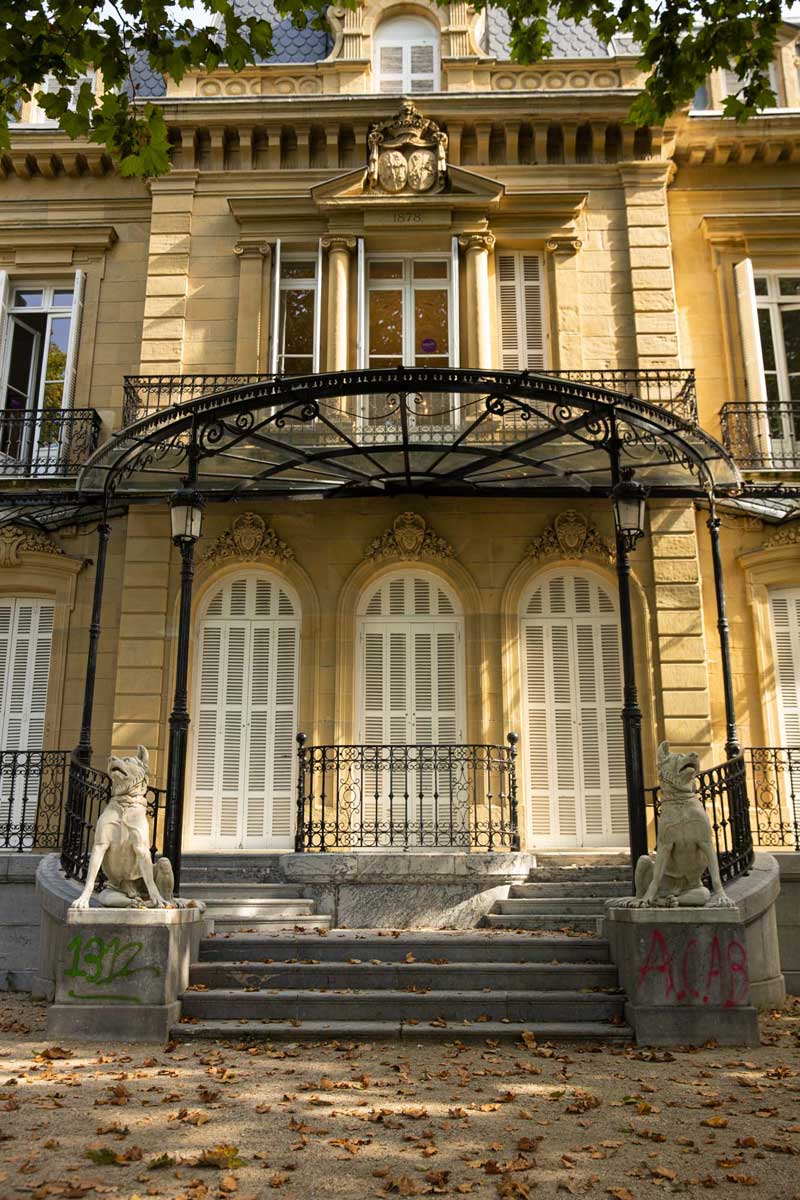 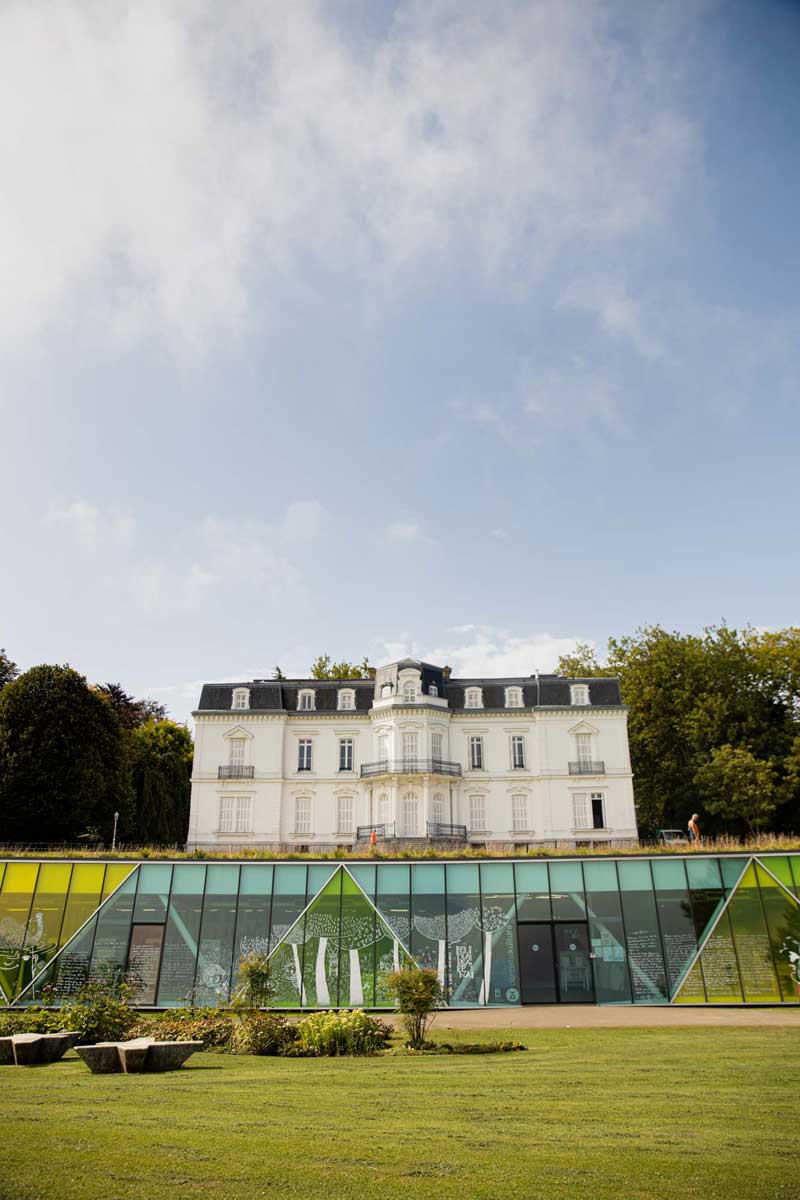 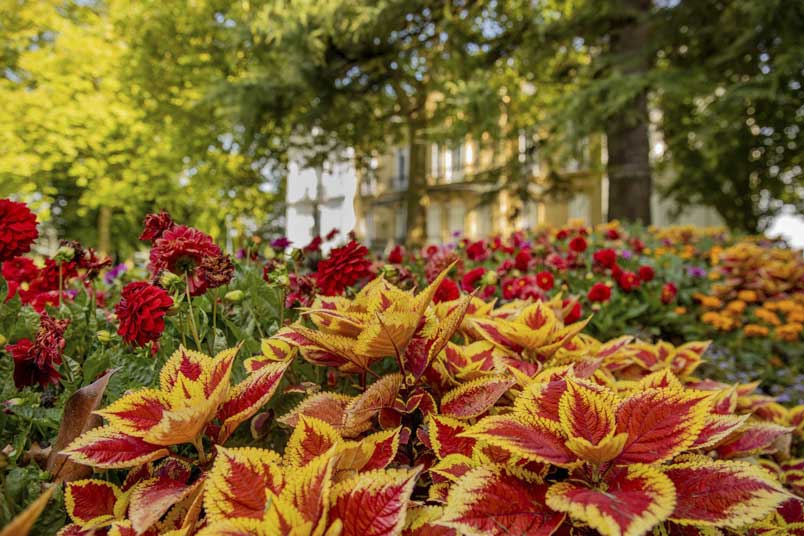 If the walls of this French-style neoclassical palace could speak, they would tell of stories and battles of illustrious names from the aristocracy and politics, names today listed on the column in front of the main door.

The Church of Aiete, where Queen Maria Cristina regularly attended mass, is located just steps from the palace. The guide shares another interesting fact about the Queen: her passion for the Basque language. Thanks to the relationship she had with the 'apaiza' (parish priest) of the Church of Aiete, whose services she attended, she started to speak Basque, until she came across the phrase ‘Nor Nori Nork’, which she mangled so badly that it would go down in history and make her give up her attempt to learn the language…do you know what she said? 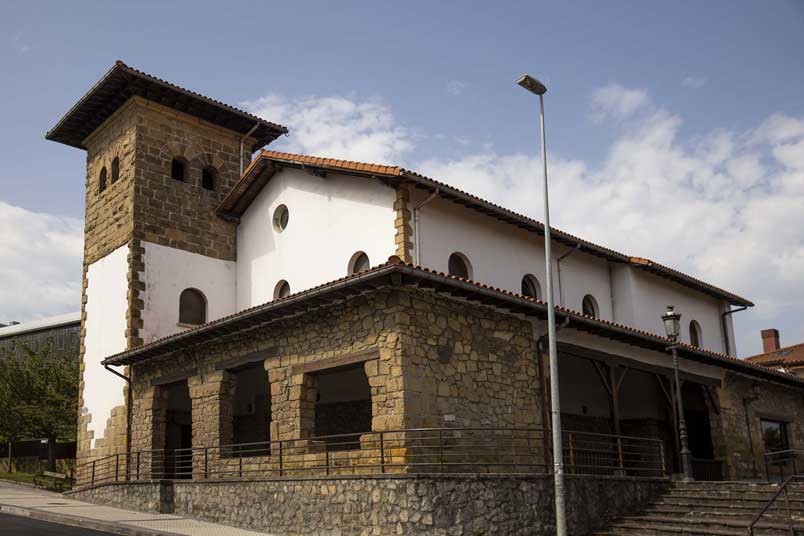 The queen was interested in more than just the Basque language, and delved into Basque culture, welcoming her guests—even Queen Victoria of England, who was particularly impressed by the 'txapelgorri (red beret)' aesthetic of the 'mikeletes', the regional police force—with a Basque dance called the 'aurreskus'.

The dictator Francisco Franco also spent several years at Aiete Palace, a building that has since been converted into a House of Peace and Human Rights, and where the International Peace Conference for the resolution of the Basque conflict was held.

We learned about this most recent aspect of Basque history, the many references to human rights in various languages, written in front of the current library, and the Anna Frank chestnut tree as we got closer to the park exit.

We took a quick water break and then crossed Aiete to reach Miramar Palace, where we came across the unmistakable work of Pierre Ducasse.

If you haven’t heard his name, take note, because it’s a must-see. Cristina Enea Park and Alderdi Eder Gardens are just some of the place that showcase his exquisite signature style.

The next step on the tour was Miramar Palace, one of the city’s crown jewels. Built at the request of Queen María Cristina to use as her summer residence, both she and the royal court spent every summer there from the time it was built until her death. 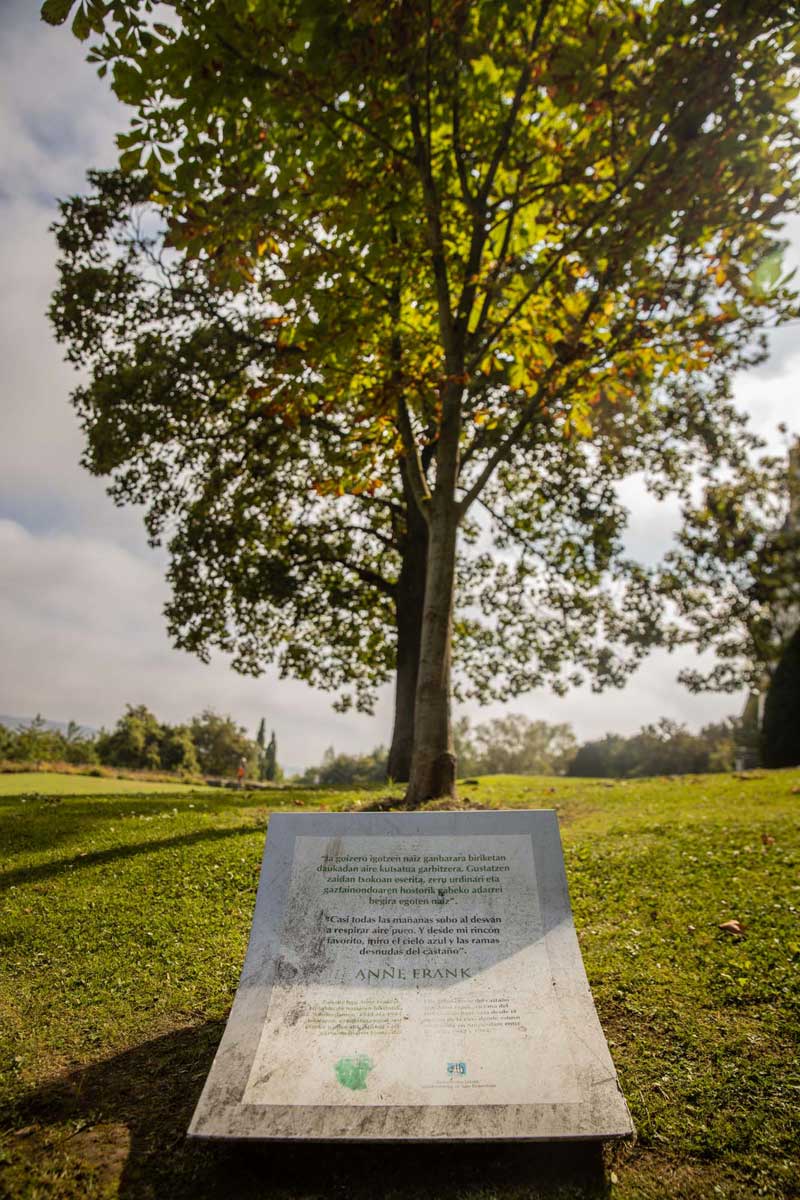 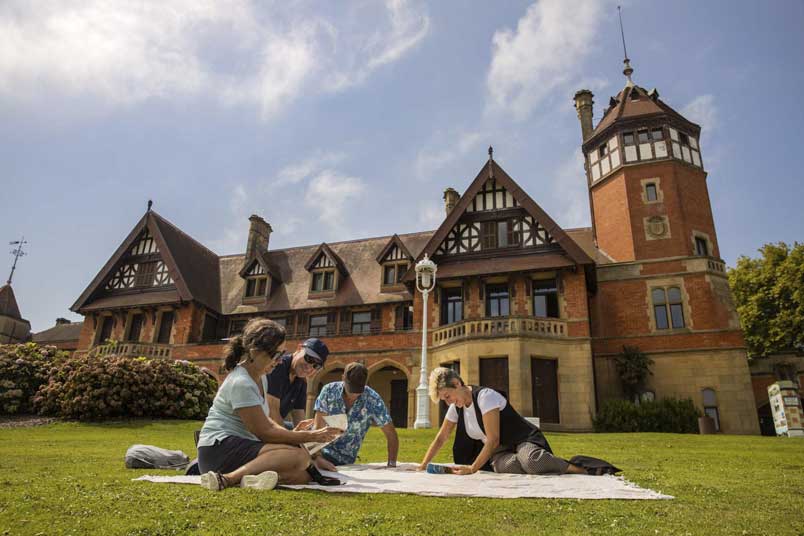 Victoria Eugenia also spent several summers in this Palace and it was here that she was baptised according to the Catholic rite in order to marry Alfonso XIII. 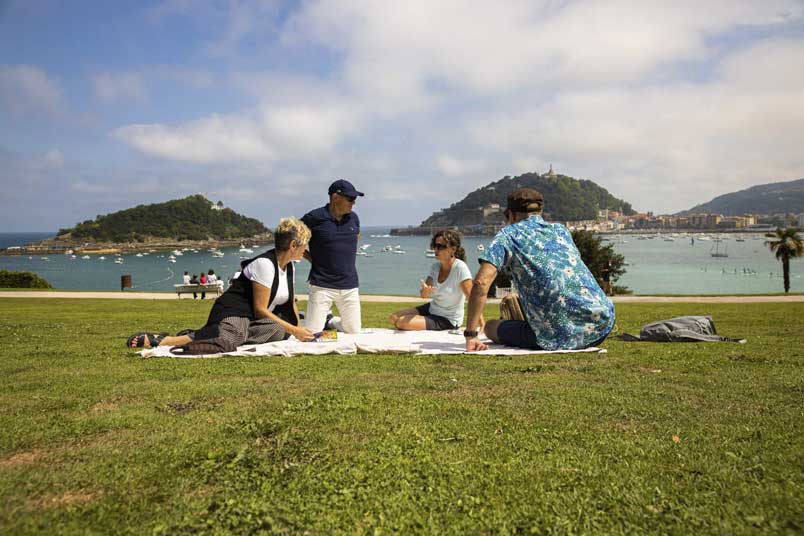 With its location overlooking La Concha Bay, Miramar Palace is a must for anyone visiting the city. Host to a full range of both indoor and outdoor activities, it’s a favourite spot for visitors and locals alike. Providing outstanding views of the city and an idyllic park, the more you learn about this San Sebastián gem, the more you fall in love.