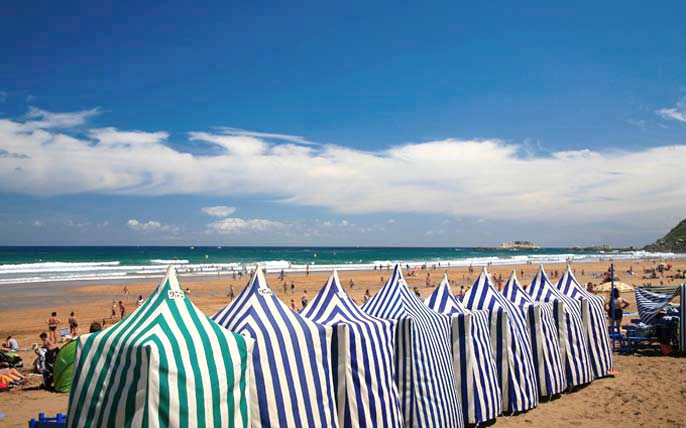 Zarautz retains some of the marine flavour of that ancient medieval town dedicated to whale fishing and a great deal of the tourist splendour it enjoyed in the 19th century. In the old town you will find several mansions and stately homes: Luzea Tower, Portu House (now the Town Hall), Dotorekua House, Narros Palace...

With its 2,500 metres in length, Zarautz beach is the longest in Gipuzkoa. Its powerful waves make it a regular for international surf competitions. A long and lively seaside promenade looks out over the beach and has several bar terraces in which you can recharge your batteries. 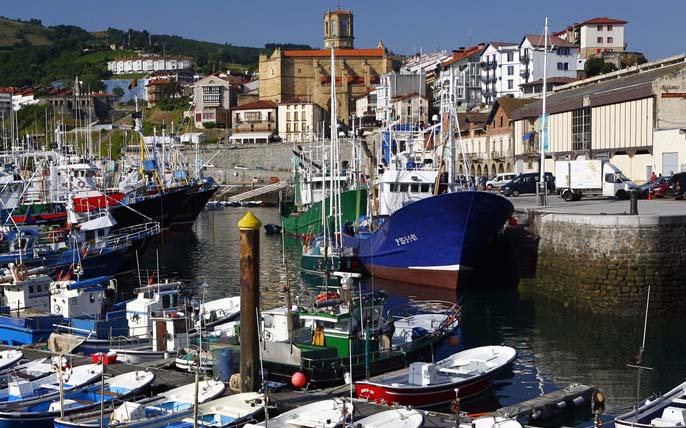 The seaside town of Getaria, where the tempting aroma of barbecued fish fills the streets, welcomes visitors with the monument dedicated to a famous navigator. Juan Sebastián Elkano, born in the town, was the first person to sail round the world. Another well-known local, for very different reasons, is Cristobál Balenciaga. The man who dressed princesses and film stars is remembered with a permanent exhibition at the Balenciaga Museum. Presiding over the medieval old town is San Salvador Church, a national monument of great artistic and historical value. After a stroll through its streets and harbour, Getaria invites you to choose between one of its two beaches, Malkorbe and Gaztetape. Or to take a walk through the surrounding rural areas with their row upon row of vines used to make txakoli, the white wine typical of Getaria. 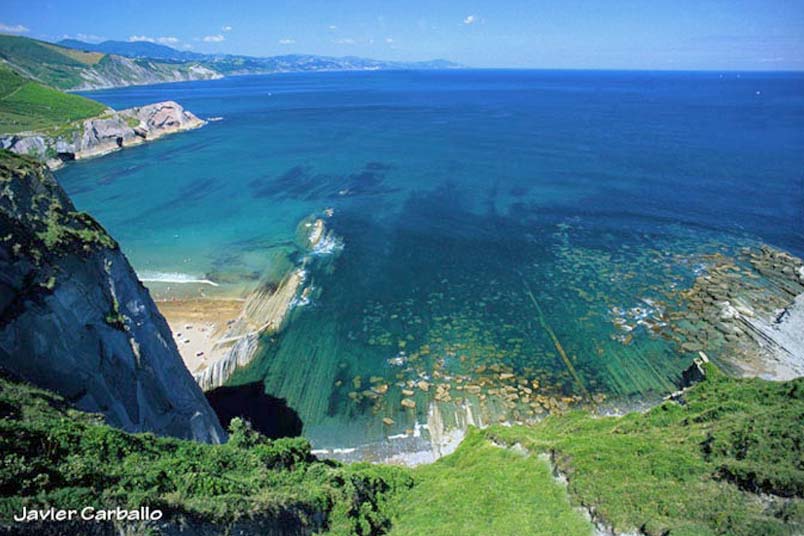 The geological phenomenon known as Flysch makes this coastline with its impressive cliffs running between Zumaia, Deba and Mutriku akin to a book on the history of more than 50 million years where you can enjoy the incredible landscape and breath-taking sunsets. Zumaia is also a hugely charming coastal town well worth a walk through its old part, admiring mansions and the splendid San Pedro parish church. 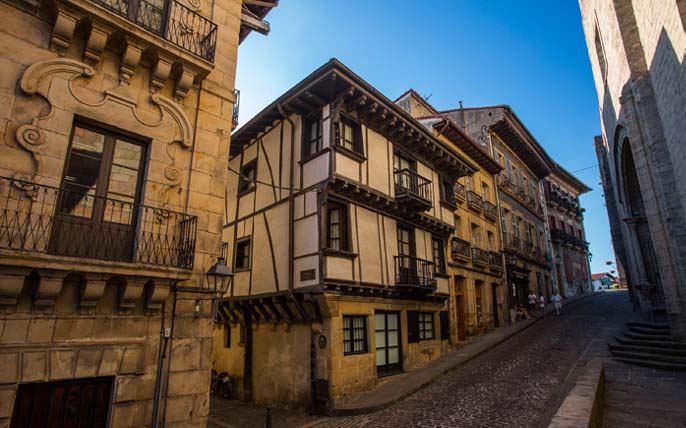 Hondarribia is a colourful fishing village as rich in architecture as it is in gastronomy. A treat for the eyes and the palate.

In addition to its impressive foodie scene, Hondarribia also has a very well preserved Old Quarter. The old quarter is listed as a Conservation Area owing to the fact that large stretches of the walls and bastions surrounding the historic part of Hondarribia are still standing, as are the two entranceways to the fortified town. Hondarribia is the only town in Gipuzkoa with medieval walls.

Inside the walls you will find delightful fishermen’s houses, mostly with wooden balconies painted in bright colours. A number of baroque buildings lend even more charm to the Old Quarter and its maze of narrow cobbled streets. The other area not to be missed when you visit Hondarribia is the Marina, where most of the bars and restaurants are to be found.

Very near San Sebastián you will find the French Basque Country and its culture: 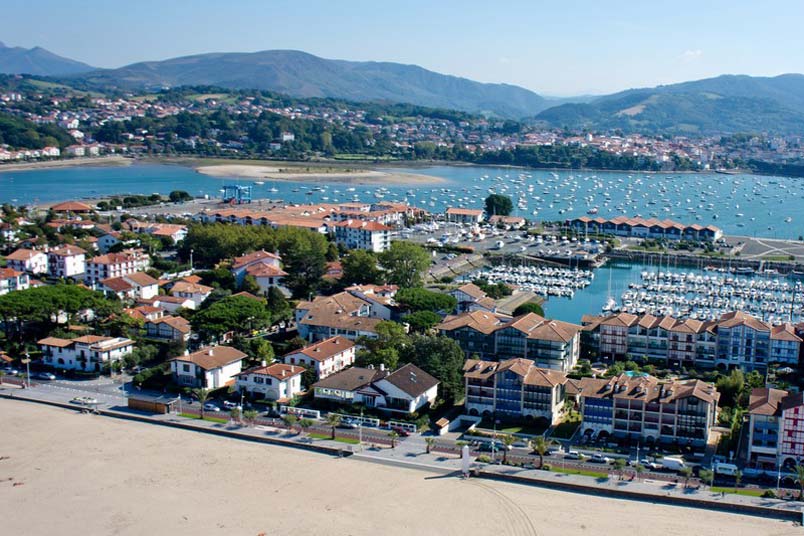 Hendaye is a French town on the border with Spain, directly across the river from Hondarribia. Its sprawling 3 km beach with its fine sand has something for everyone, families and surfers alike. The town is also full of pretty Basque-style houses and is the birthplace of the style known as Neo-Basque. And we mustn’t forget to mention its impressive castle, the Château Abbadia, on the outskirts of town. On top of all of this, Hendaye also boasts a coastline of impressive beauty, characterised by rocky flysch formations, easily accessed from the paths wending their way along the coast. 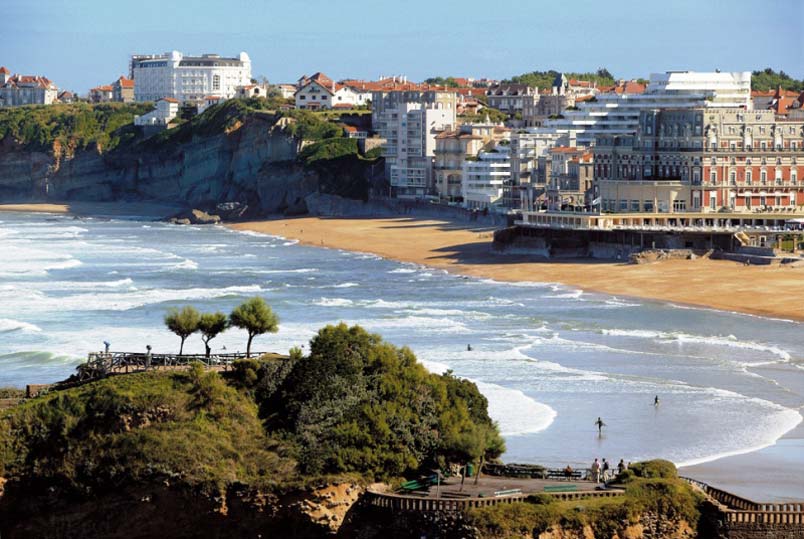 Biarritz is known for being one of the resorts favoured by European royalty, for its 6 km of beaches, its therapeutic waters and its surf scene. That’s why Biarritz offers visitors an unusual, unique atmosphere.

The city is mostly composed of stately homes and mansions balanced in perfect harmony with the surf culture, more relaxed and easy-going, which enjoys a long tradition of its own in Biarritz. No doubt about it, this interesting combination is part of the city’s makeup. 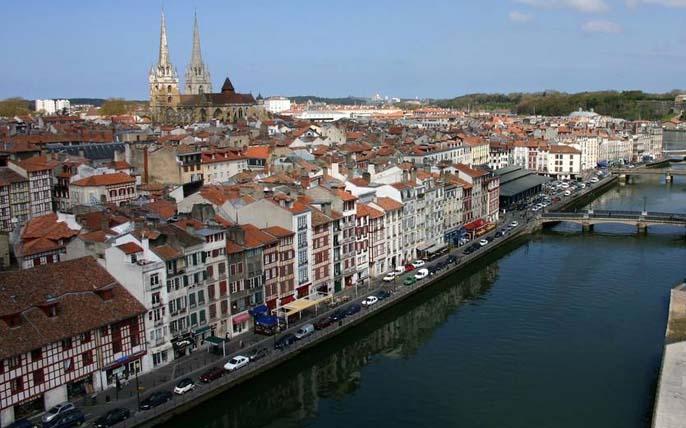 Bayonne is a peaceful city, home of chocolatiers and the famous Bayonne ham.

The city is full of pretty houses in the Basque and French styles, with colourful beams and shutters; the River Nive runs between the two main city districts, Grand Bayonne and Petit Bayonne. Both sides of the river are packed with bars and restaurants, making this the perfect spot to have a drink or eat while enjoying the fine city views. 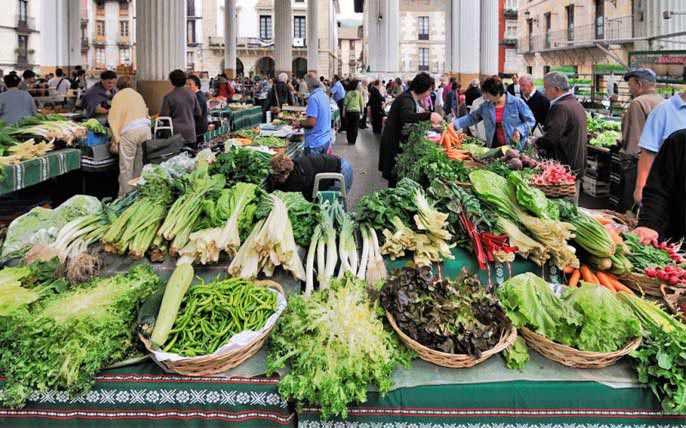 The Goierri region lies at the heart of the Basque Country; it has 18 municipalities, largely rural villages with unparalleled natural charm, nestling between two Nature Reserves, Aralar and Aizkorri-Aratz. This is where sheep graze on the best of grass to produce the fine quality milk used to make the famous artisan cheese from the Goierri region, Idiazabal.
The small rural villages in the Goierri region have maintained their charm and rural tradition while modernisation followed its course. We could say that the image that comes to mind when you think of any particular one of these Basque villages could equally refer to any of them.

Ordizia, one of the villages in the Goierri region, is home to one of the biggest traditional markets dating back some 500 years. 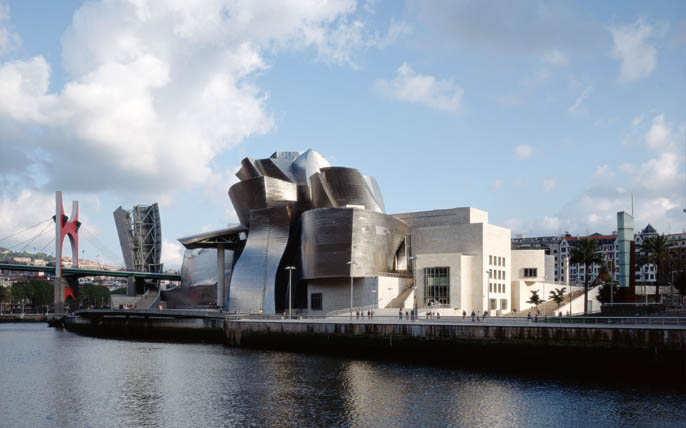 Bilbao is the biggest city in the Basque Country and its newest modern face. It cleverly combines traditional Basque culture with a new outlook for the future. This is a visit not to be missed for lovers of design and culture. Bilbao is home to the Guggenheim Museum Bilbao designed by the architect Frank Gehry, La Alhóndiga, a community centre designed by Philippe Starck, the Fine Arts Museum, the Zubizuri Bridge, designed by Santiago Calatrava and the Bizkaia Bridge...

If you do visit Bilbao, don’t forget to take time to get lost in its Old Quarter, an area commonly known as “las 7 calles” or, in Basque, “Zazpi Kaleak”, for the seven streets of the original medieval town. Today it remains the liveliest and most picturesque part of the city. The narrow streets, mostly pedestrian, are lined with bars serving delicious pintxos and Basque cuisine. 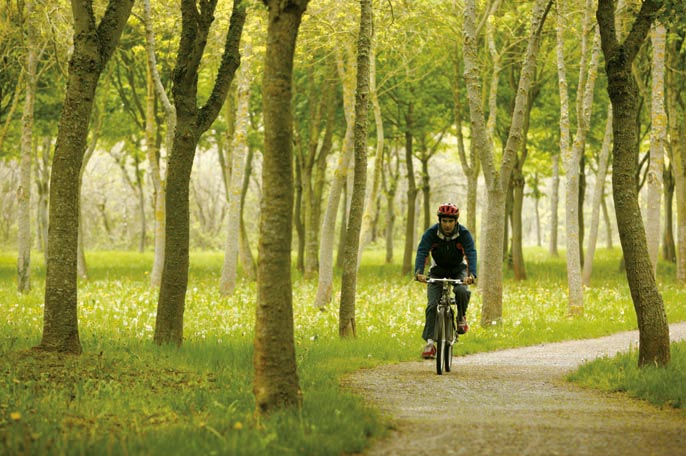 In Vitoria you’ll find the best-preserved old town in the Basque Country and impressive renaissance architecture. Many of its buildings date from the 15th century and even earlier and are very well preserved. The old town is almond-shaped and is partly surrounded by an 11th century wall in addition to several impressive lookout towers.

The old town is also home to numerous mansions and the Santa María Cathedral is one of the musts among your building visits. This cathedral has won the heart of internationally famous writers and intellectuals such as Ken Follet, who took his inspiration from the building to write the second part of The Pillars of the Earth.

This is also one of the European cities to enjoy the highest number of green spaces and gardens per person (some 42 m2 per capita if we include the modern Green Ring expansion area). The Basque capital has 10 million square metres of parks and green areas for taking a stroll, riding a bike, watching birds and deer or horse-riding.

And if it's modern art you'd like to see, don't miss the Artium Museum with one of the most important collections of contemporary Basque and Spanish art. 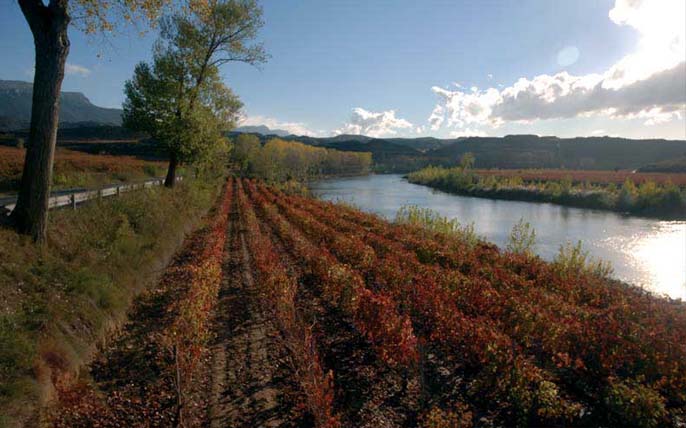 The Rioja Alavesa is a region of Alava; it is one of the seven regions making up the province. The regional capital is Laguardia. The local economy is uniquely based on viticulture and the production of Rioja wine. Enjoy the wine and charms of the region with all five senses.

Laguardia is without a doubt the best known town in the region, and it’s also the most attractive. Founded in the 10th century to defend the kingdom of Navarra, this pretty walled town stands on a hilltop, keeping watch over the surrounding vineyards, with the Cantabrian mountain range in the distance.

This walled town is completely surrounded by vineyards and is the perfectly place to discover the local wine-making tradition. Some of the wineries located beneath the village houses are open to tourists and visits are a must.

The two most famous are the Ysios winery, the work of Santiago Calatrava, and the prizewinning Marqués de Riscal winery (Elciego), designed by Frank Gehry. 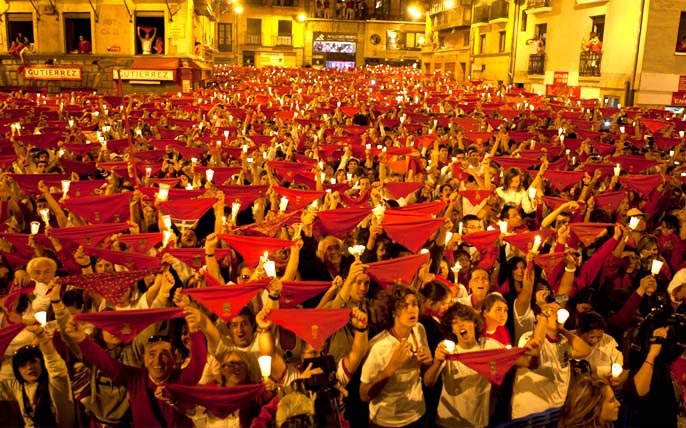 Pamplona, capital of Navarra, is by a long shot the biggest and most outstanding city in the province. It is home to one of the world’s biggest fiestas, San Fermín, during which the famous and fascinating running of the bulls takes place. But Pamplona has much more to offer, from its pretty old town to the impressive citadel park. And don't forget the excellent food and good wine.

Of course, Pamplona owes part of its fame to its adopted son, Ernest Hemingway, who spent rather a lot of time in Navarra during the Spanish Civil War and was a great admirer of the San Fermín festivities. The San Fermín fiestas kick off on July 6 and last for a week. During this time, the city is invaded by more than a million visitors and tourists, becoming one of the biggest festivals in the world. And of course, every morning the bull-running takes place, where hundreds of people run the bulls through the narrow streets of the Old Quarter.

For the rest of the year, Pamplona is a rather peaceful city. It is easy to get around, and almost all places of interest are found in the city centre or only a short walk from the Plaza del Castillo. 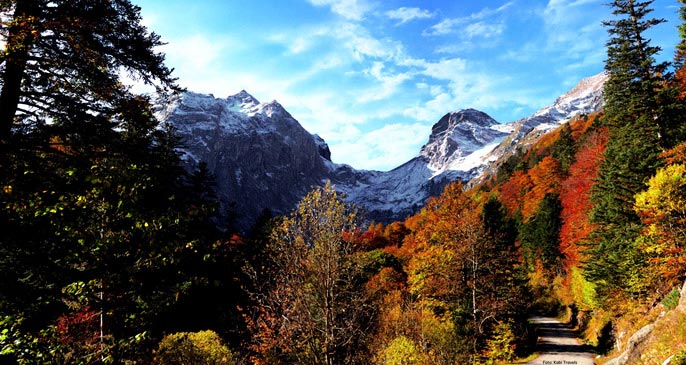 For lovers of the mountains and nature, a visit to the Pyrenees is essential. The Pyrenean mountain range forms an immense natural barrier between Spain and the rest of the continent, starting in the cold Cantabrian Sea and ending in the warm Mediterranean. Its domains occupy an area of 450 kilometres, where you will find impressive summits standing more than 3,000 metres in height; these include Aneto (3,404 m), Monte Perdido (3,355 m), Maldito Peak (3,350 m), Espadas Peak (3,332 m) and Vignemale (3,298 m).

Two hours to the east of San Sebastián, the Pyrenees are a place of fascinating images: the deeply moving precipices of the Larra massif (Belagua), the sprawling beech and fir woods of the Irati forest, the depths of the Foz de Arbaiun gorge observed from the skies by vultures, and the Roncesvalles collegiate church heritage site. The images become gradually gentler as you approach the Baztan and Altzama valleys where the farmhouses, legendary caves, hidden reservoirs, green meadows and oak and beech forests leave all who visit open-mouthed.

In the west, Aralar and the Urbasa Nature Reserve offer marvellous panoramic views of the bluish eastern Pyrenees. 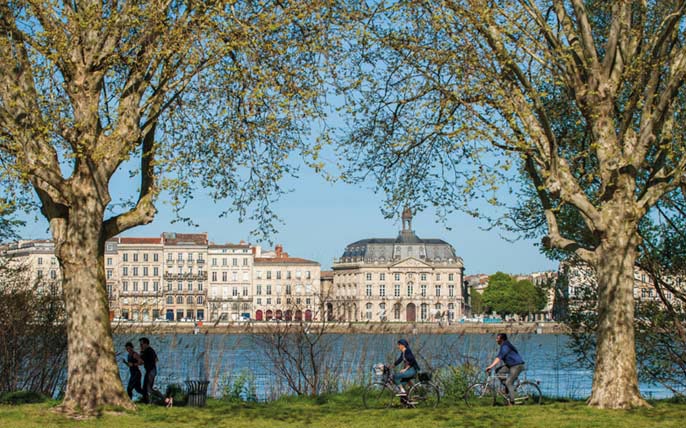 Bordeaux is a port city in the south-west of France, capital of the Aquitaine region and the fifth largest metropolis in France, after Paris, Marseilles, Lyon and Toulouse. Often called “the pearl of Aquitaine”, the part of the city known as the Port of the Moon is listed as a UNESCO World Heritage site.

The centre is located to the south-west of the River Garonne and maintains traditional stone construction with small terraces, giving its streets a monumental character prompting its nickname of Petit Paris. But the heart of Bordeaux is to be found in its extraordinary gardens, where the local ochre stone combines the harmony of its 18th century architecture with the indolence of a stream surrounded by trees hundreds of years old.

Furthermore, the city is known across the world for its vineyards, particularly since the 18th century, when it enjoyed a golden age.