Along with Miramon, Ametzagaina is one of the largest parks in San Sebastián and can be accessed from several neighbourhoods. It features extensive hardwood forests, areas of undergrowth and large grassy areas criss-crossed with five kilometres of paths for easy strolling. The Pyrenean oak, the type of oak that gives the park its name in Basque (marojo) and was once part of a primitive forest, can still be found, scattered among other species such as oaks, alders, chestnut trees, laurels, birches, etc.

Interactive route: Enjoy a wonderful trip through the magnificent yet little known San Sebastian park that covers an area of 380,000 m2

Interactive map of the route

The visit to Ametzagaina begins at the entrance from the Intxaurrondo neighbourhood, entering through the Tuniz area, where a large pedunculate oak rises impressively next to the hedge of the house that the entrance is named after.

This type of oak tree has a great deal of symbology in Basque culture, not least because of the famous Gernika tree, under which town meetings were held and charters were sworn; a hundred-year-old specimen of this species.

Entering from the right, a flat path leads directly to the panoramic viewpoint, through a series of clearings and copses on the left. 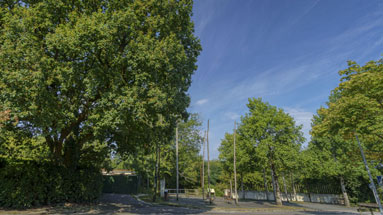 There is a singular ash tree with four trunks of smooth grey bark in a more open area on the right. In Basque culture, there is a belief that lightning never strikes an ash tree so this is why many villages put ash branches on the doors of their homes. Even today, some villages in the Basque Country place the branches of this tree at the entrance to the houses and farmhouses to protect them from evil spirits.

On St John's Eve, a night full of magic and myth, the bonfire is lit around an ash tree. 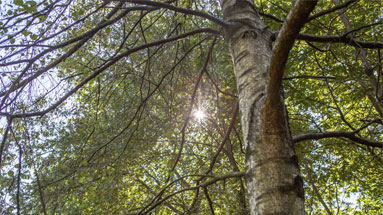 The path continues along gentle slopes until it reaches a large, modern viewpoint 4. Located on a hill in the westernmost part of the park, this privileged vantage point offers the chance to enjoy the view of La Concha Bay in the distance, flanked by mounts Igeldo and Ulia, and the banks of the Urumea river, just south of the park. This little known viewpoint offers an unexpected, different view of the city, a beautiful perspective that is definitely worth discovering.

The hillside next to the viewpoint with its ample grassy area is an outstanding place to rest and admire the scenery on clear days. 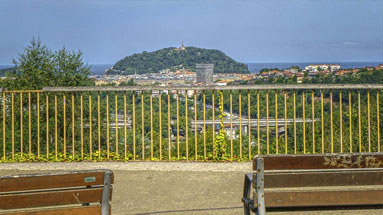 The gravel path that climbs up the right-hand side of the lawn leads to an almost oval-shaped esplanade home to a birch tree with a twisted, cracked trunk. Pass the tree to reach the top of the hill, at an elevation of 123 metres, where you’ll find the old Ametzagaina fort. Nature has taken over this mysterious place, plants now growing where the moat, barracks, powder magazine and cannon emplacements used to be.

The building, renovated by the participants (from both San Sebastián and the German city of Wiesbaden) of a youth work camp, dates from 1875 and was built during the Carlist wars. After the war, it housed a small garrison until 1891, when it was abandoned and used as a quarry to supply stone for nearby houses. 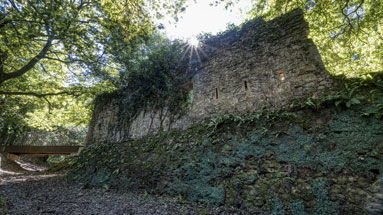 5. The entrance to Uba and the church

The entrance to Uba and the church

After the archaeological site, the route passes through fields where hundreds of delicate daffodils (Narcissus spp.) turn the grass yellow in early spring. At the crossroads, turn right and descend a steep path that leads to the entrance to Uba 6, just steps from the municipal youth hostel of the same name and the 14th-century church.

This hermitage is dedicated to the Virgin of Uba, who is credited with beneficial powers over children’s sleep. It is said that babies who kiss this image on the second day of Easter will have no more trouble sleeping for the year. This old tradition still remains among the people of San Sebastian.

The Virgin is a mariana carving, with a disproportionate baby Jesus in her arms, around thirty centimetres high, made of wood in the estofado style and dating back to the 15th century.

It seems that the virgin was formerly located in a niche in San Sebastian's city walls, on what is known as Sancho gate, but in the time of Charles V, the figure was transferred from the city walls to Uba, where it became known as the Virgen del Dulce Sueño (the Virgen of Sweet Dreams).

It was given to the Orthodox community in 2010 and the hermitage was decorated in the Eastern Byzantine style.

The walk, which descends slowly under the dense foliage of a wooded area, finally reaches an open clearing in the vegetation. The area is home to many blackbirds, which you can hear fluttering among the dead leaves and the branches of the bushes if you surprise them. 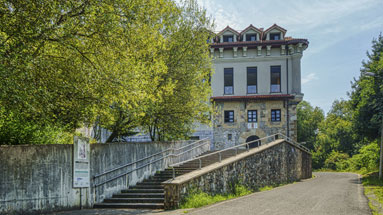 5 The entrance to Uba and the church

Following the path into sunnier areas, an educational sign marks a special grove of Iberian elms. These trees, planted in a participatory process promoted by the San Sebastián City Council and the Zerynthia Association, were selected for their resistance to Dutch elm disease and to encourage the recovery of the delicate Satyrium W-album butterfly, whose populations are declining throughout Europe.

From this point, the path begins a gradual ascent towards the east, with the nearby Monte de San Marcos serving as an ever-present landmark. 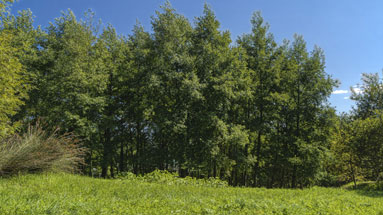 Hidden among the vegetation is a large pond, which is home to newts and dragonflies.

In the past, these bodies of water were considered to be unhealthy and sources of infection, however, we now know that they play an important ecological role in maintaining communities of amphibians, reptiles and birds. Consequently, not only are those that already exist being preserved, but many that had been drained have been restored. 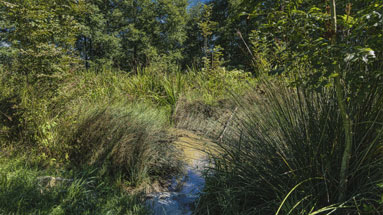 8. The man-made crater to look at the stars

The man-made crater to look at the stars

The route leads directly to a man-made crater; this is a comfortable place to stop and take a break, although it was designed for watching the night skies away from the light pollution from the city.

There are not many experiences more magical than getting away from the city lights to admire the night sky. This out-of-the-way place is free of light pollution, but not far from the centre of San Sebastian.

When there aren't any clouds and the sky is clean and clear, this unusual crater lets visitors contemplate San Sebastian's starry skies and enjoy a unique experience.

Follow the hill path from inside the crater, passing a group of cherry laurels with large, lustrous leaves. 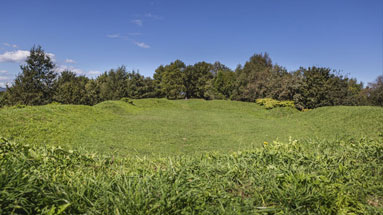 The route crosses several recreational areas before ending at the Tuniz entrance. First is an area for physical exercise, then a charming park of logs and nets where kids can play, and finally, a recreational area with tables and benches scattered among small trees.

The park is also home to a Gravettian hunter-gatherer archaeological site that dates back approximately 27,000 years, one of the oldest in the city. 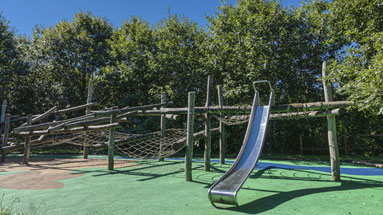 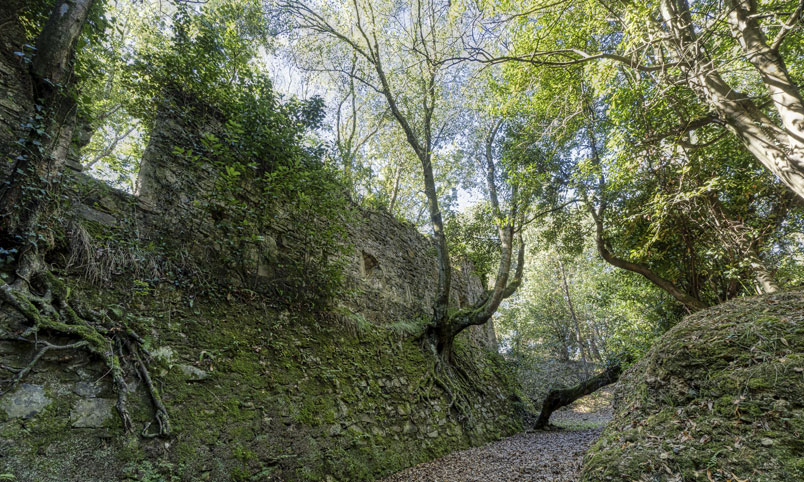 One of the most notable features of this natural space is the well-preserved fort, built in 1875 during the Carlist wars and located on the highest point of the park. It also has recreational areas, playgrounds for children and areas for physical exercise, and a spectacular viewpoint overlooking the Urumea river basin.

It has an extensive cycle path, so you can also go by bicycle.